It can be said quite assuredly that America, along with so much of the West, is the home of the most materialistic, consumeristic, self-centred, money-hungry and hedonistic people on earth. Sure, such folks can be found elsewhere, and have been throughout history, but America today especially has elevated a lifestyle of selfishness and love of wealth and things to a whole new level.

An obsession with self and all the goodies of life is a major defining trait of most Americans. Given such a context, it is not in the least surprising that so much of American Christianity perfectly reflects all this. Some of the most unbiblical gospels of selfishness and covetousness and greed can be found in American Christianity. 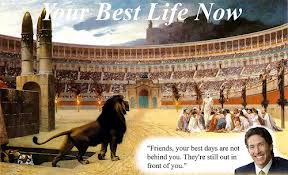 It is no surprise that the Prosperity Gospel and all the self-help, feel-good, self-serving gospels have been birthed in America. Instead of resisting the surrounding pagan culture with all its false idols and ungodly values, many churches have simply soaked it up, repackaged it, and sought to sell it as the Christian gospel.

I have written often before about this sort of worldly and carnal Christianity which puts wealth, success, self-worth and self-esteem and personal satisfaction at the top of the list of Christian virtues. With best-selling books like Your Best Life Now, this is not a biblical enterprise but a gospel of greed and selfishness.

Yet millions and millions of believers have fully embraced this. It is as if they simply do not read their own Bibles any longer. They instead simply fall for whatever these tele-evangelists and mega-church preachers tell them. Zero biblical discernment coupled with an obsession with self make these folks easy pickings for these spiritual snake oil salesmen.

One simply has to read how Jesus and the disciples lived, and the gospel that they proclaimed, to see how the modern version of events has absolutely nothing to do with biblical Christianity. Having just been reading in 2 Corinthians, let me offer one rather relevant portion of this.

Paul has been talking about the “super apostles” and their over-the-top claims of spirituality, success and the like. So he powerfully contrasts these folks with himself. In 2 Cor. 11: 22-33 he says this:

Are they Hebrews? So am I. Are they Israelites? So am I. Are they Abraham’s descendants? So am I. Are they servants of Christ? (I am out of my mind to talk like this.) I am more. I have worked much harder, been in prison more frequently, been flogged more severely, and been exposed to death again and again. Five times I received from the Jews the forty lashes minus one. Three times I was beaten with rods, once I was pelted with stones, three times I was shipwrecked, I spent a night and a day in the open sea, I have been constantly on the move. I have been in danger from rivers, in danger from bandits, in danger from my fellow Jews, in danger from Gentiles; in danger in the city, in danger in the country, in danger at sea; and in danger from false believers. I have labored and toiled and have often gone without sleep; I have known hunger and thirst and have often gone without food; I have been cold and naked. Besides everything else, I face daily the pressure of my concern for all the churches. Who is weak, and I do not feel weak? Who is led into sin, and I do not inwardly burn? If I must boast, I will boast of the things that show my weakness. The God and Father of the Lord Jesus, who is to be praised forever, knows that I am not lying. In Damascus the governor under King Aretas had the city of the Damascenes guarded in order to arrest me. But I was lowered in a basket from a window in the wall and slipped through his hands.

This is what he extols, promotes, and champions: not riches, glory and power, but suffering, hardship and persecution. It is being in weakness and trials and opposition that he champions and relishes. That is his claim to genuine apostleship. That is the proof of his ministry and calling. That is what he boasts in.

Tom Wright reminds us that in the ancient Roman world, “military might and bravery was regarded as one of the highest of the virtues. . . . And in Roman culture one of the standard things that every public figure could do was to list his achievements.”

Well, this very public leader was also happy to list his achievements – and they were the very opposite of his carnal and proud opponents at Corinth. He listed as his greatest achievements his sufferings, his hardships, his beatings, his enemies, his blood, sweat, toil and tears. As Paul Barnett comments:

Paul takes this literary convention of boasting and inverts it. His boast is in folly, weakness, disappointment and defeat. . . . Paul’s opponents boast of superiority (11:5; 12:11), of being ‘super-apostles’. Yet the effect of their ministry is to enslave and manipulate those who succumb to them (verse 20). Paul, however, is the servant of Christ in his ministry to the churches. As opposed to the triumphalism of these newcomers, the essential character of Christ is the meekness and gentleness of a crucified slave. Christ’s glory is his divinely humble service of others. This is the message of the cross which Paul seeks to embody and express in his ministry of evangelism.

Paul turned on its head the entire type of boasting and the listing of achievements so common in the Greco-Roman world. His opponents gloried in self, in their power, in their eloquence, in their success, in their victories. Paul gloried in his weaknesses, his foolishness, his battles, his trials and his humility.

Once again we see the topsy-turvy nature of the Kingdom. What the world – and worldly Christians – consider to be of value and of substance, biblical Christianity considers to be but dung. Paul exalts in his sufferings and weakness and rejection and abasement. The world and carnal believers exalt in riches and power and success and prosperity.

That such worldliness has so heavily crept into the churches (both now and then) should send us all on our faces before God in repentance. Such worldliness is a constant temptation to be fought and resisted. In his very helpful 1994 volume, God in the Wasteland, David Wells speaks about this pressure to conform to the world, and he explains what the world means:

This “world,” then, is the way in which our collective life in society (and the culture that goes with it) is organized around the self in substitution for God. It is life characterized by self-righteousness, self-centeredness, self-satisfaction, self-aggrandizement, and self-promotion, with a corresponding distaste for the self-denial proper to union with Christ.

Self is at the heart of the world system, and it is at the heart of sin. That we have entire gospels today totally focussed on and catering to self tells us just how far we have drifted from the clear message of Jesus and the disciples. And all over the world today we see these harmful self-centred gospels, and the deceptive prosperity gospels, extending their deadly tentacles.

I saw this again in Singapore where I just spent a week. American Christianity has a lot to answer for in this regards, since they are the main exporters of all this mischievous nonsense. One day these preachers and teachers will have to give an account of themselves and their cheap gospels when they stand before the righteous judge. I would not want to be in their shoes.

Once again, Christians have a clear choice: they can stay with biblical Christianity, and all its hardships, suffering and self-denial, or they can go with what the world values and offers. But the Christian cannot have both. We each must decide which one we will embrace, promote and glory in.

12 Replies to “Your Worst Life Now”