One set of passages often appealed to by those pushing the prosperity gospel are the Old Testament texts which speak of the promises of material blessing in such places as Lev. 26 and Deut. 28-29. It is said that these passages are for believers today, and need to be appropriated. This is a common theme of the prosperity teachers.

But it is vital to view these covenantal blessings (and curses) in context. These blessings and cursings have a specific referent: the nation of Israel. Consider the negative side of things: the promised curses for disobedience all point to one primary event – the exile. As Douglas Stuart comments:

“A careful reading of Lev 26, Deut 4, and Deut 28-32 reveals that the ultimate national fate for a disobedient Israel will be defeat in war, capture, and exile. Most of the covenant curses revolve around or lead up to that fate, and most of the covenant restoration blessings involve restoration from it. . . .The curses of Lev 26 and Deut 28-32 are a package, referring to a single era of judgement.” 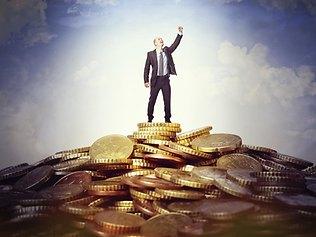 In addition, these blessings and curses have a corporate, rather than merely an individual, dimension. They applied to the nation as a whole. This ties in with the Hebrew understanding of corporate solidarity. When one individual sins, the whole nation suffers. The sin of Achan is a good example (Joshua 7). Although Achan alone sinned, we read that “the Lord’s anger burned against Israel” (Josh 7:1).

As Paul House has noted, “the entire nation stands or falls together because the covenant was made with the whole nation. They are a community of faith as much as a collection of individuals who believe in and follow the Lord. Selfishness, disregard for Yahweh’s commands and covering up sin therefore harms the entire group.”

This corporate nature of the covenant obligations tends to be lost on the prosperity gospel advocates. They teach that individuals can be wealthy and prosper, based on the covenant stipulations, but ignore its background and context. And one can ask why God blessed his people in such a fashion. Was such material blessing meant to be an end in itself, or a means to an end?

An interesting discussion of this can be found in Psalm 67. The seven verses speak of God’s blessing, but interestingly five of the verses speak of the nations, the peoples, and/or all the earth. The blessing of God is not meant to flow into Israel and stop there, much as water flows in the Dead Sea and stays there. We are blessed to bless others, not enrich ourselves.

It should also be noted that the prosperity gospellers tend to focus on the blessings, while ignoring the curses. They seem quite eager to claim the blessings for obedience, but are strangely silent about the curses for disobedience. Yet both go together. Moreover, as even a superficial reading of either Lev. 26 or Deut. 28,29 will show, there are far more curses than blessings.

Advocates of the prosperity gospel also need to be reminded that the curses and blessings of the covenant were specifically for the physical nation of Israel, and tied up closely with material issues such as the land, productivity, and rest from enemies. Obedience to Yahweh would bring security in the land, peace from foreign aggression, agricultural productivity and abundance, and long life and health.

Disobedience would bring the reverse. Then disease, poverty, famine, war, exile and death would ensue. Thus when prosperity gospellers point to the wealth of the patriarchs as examples for contemporary believers, they are walking on shaky ground.

The great riches and success that the prosperity teachers promise their followers seems to be an automatic right of those with enough faith. Very little mention is made either of a believer’s obedience and spirituality, or of what he will do with that wealth. But scripture makes a connection between wealth and obedience on the one hand, and wealth and giving on the other. As Chris Wright puts it,

“there is the reciprocal nature of giving and blessing. The people’s giving and feasting was to be an obedient response to God’s giving and blessing. But at the same time, God’s blessing would be God’s continued response to their obedience. It is impossible to separate the two. It is inadequate to speak of obedience being the condition of blessing, or to speak of unconditional blessing unrelated to responsive obedience. There is a dynamic reciprocity between the two.”

However, even this idea needs to be tempered. Blessings are not so much rewards for obedience as simply the basis of being a covenant people. It is more a question of the absence of blessing when disobedience takes place. As Wright notes,

“some popular versions of the ‘Prosperity Gospel’ give the impression that all the material blessings of [Deut. 28:] 2-14 will come pouring out of the heavenly slot machine if you press the right behavior buttons. However, although it is clear that if the curses happen, they will come as a deserved punishment, there is no corresponding sense in which the blessings can be earned as some kind of reward. The whole thrust of Deuteronomy would protest at such an idea.”

Moreover, in contrast to the prosperity version of things, the enjoyment of blessing is very much based on the continuous and conscious choice of Israel to walk in obedience to Yahweh. The blessings are not some automatic favour to be enjoyed at the snap of a finger.

And in the New Testament, blessings are seen more in spiritual terms than in such physical terms. Ephesians 1:3 puts it this way, “Praise be to the God and Father of our Lord Jesus Christ, who has blessed us in the heavenly realms with every spiritual blessing in Christ”.

As William Brown observes, “The parallels between the Old and New Testament usages of blessing are striking. To be blessed is to be guaranteed special favor by God with resulting joy and prosperity. In the New Testament, however, the emphasis is more on spiritual rather than on material blessings”.

Indeed, there are many examples of how the NT de-emphasises this-worldly aspects of wealth and material blessing, while emphasising the other-worldly nature of true wealth. A good example is Matt. 6:19-21: “Do not store up for yourselves treasures on earth, where moth and rust destroy, and where thieves break in and steal. But store up for yourselves treasures in heaven, where moth and rust do not destroy, and where thieves do not break in and steal. For where your treasure is, there your heart will be also”.

And while we find blessings and curses uttered by Jesus in the gospels, they take on a very different slant. Consider the Sermon on the Mount as an example. The blessings pronounced there differ from those found in Lev. 26. As Allen Ross points out, the beatitudes

“pronounce a blessing on those who are persecuted, rather than pronounce the blessing of victory over enemies. According to Christ’s teachings, the immediate way of blessing during this present age (before the fulfillment of the covenant promises) includes poverty, humility, need, and affliction. To follow Christ now might mean the way of the cross and not the way of military victory.”

New Testament believers therefore need to be careful in how they appropriate Old Testament covenant theology. While some, like dispensationalists, may go too far in making a clear distinction between Israel and the church, we need to nonetheless remember the unique role and calling of Israel.

The very material and earthly set of rewards and punishments for Israel seem to find little resonance in the New Testament. Indeed, given that the majority of consequences for covenantal obedience and disobedience seem to revolve around the land, we can hardly expect to see them in the New Testament, which makes almost no mention of the land.