There are plenty of clueless wonders in the world who are putting us all at risk by their inability or refusal to face reality. There are so many folks with their heads in the sand, totally oblivious to some very real and ugly threats which we must face, or we perish.

Yet for so many of these guys, just pretending that everything is hunky dory, and hoping that any possible dangers will somehow just mysteriously vanish all by themselves seems to be their preferred way of dealing with the world around them.

Some of them are well-meaning, and simply want to put a positive spin on everything. I encounter these people often. They are pollyannas who seem blissfully unaware of the real world and the dangers that surround us. That term of course comes from the 1913 novel by Eleanor Porter, about making the best of a bad situation. It has now been distorted to refer to ‘an excessively or blindly optimistic person’. 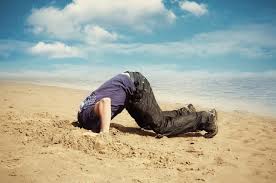 There are plenty of such folks around. As I say, sometimes they mean well, always trying to find a silver lining in every dark cloud. But when this comes at the expense of dealing with reality, then it can become quite unhelpful, even dangerous.

And some of the worst of these folks are the clueless Christians with their feet firmly planted in midair, seemingly unaware of what is in fact going on all around them. In addition to not facing reality, they are quite happy to throw out inane and mushy ‘Christian’ cliches, as they ignore great evil staring them in the face.

We had plenty of these Christians as we fought very real enemies such as the Communists or the Nazis. They refused to face reality, and simply wanted to believe that everything was fine in the world. By taking such a blinkered view of the real world, they actually contributed to the evil which unfolded.

We find actually the same mindset when it comes to the latest and most pressing menace of our time: the political ideology known as Islam. With perhaps 240 million people already killed in the name of this movement, and with daily headlines of gruesome beheadings, jihadist attacks, and suicide bombers, you would think the remaining pollyannas would have thinned out greatly.

But no, they are still out there in droves. And as I say, they often justify their head in the sand approach with rather vapid and meaningless Christianese. They are happy to glibly toss around pious platitudes which mean nothing really, and simply demonstrate their inability to think straight in a time when straight thinking is absolutely vital.

Consider just one recent example of this. Someone on another site posted a video which has been making the rounds of a hot-headed Muslim leader telling his followers to embrace jihad, sharia, and so on. And this was in a Western country. The room was packed full of “moderate Muslims” and they all fully agreed with what this leader was telling them.

That video is indeed a shocker, and should serve as a wakeup call to all of us. Yet some Christian wrote back quite indignant about all this, claiming that Islam was no big deal and that he was “NOT interested in the fear mongering campaign”.

He said in part, “My response as a Christian is not to worry about them taking over the world”. He went on to say that “My Christian response is to continue to keep sharing Jesus love and forgiveness with them”. He also proudly said that “God has not given me a spirit of fear!”

Hmmm, there are many things one can say in reply to this. The most obvious is this: are you in fact regularly sharing your Christian faith with Muslims here in the West? I have often said that God may be allowing Muslims to come to the West so that we might reach them for the gospel. But I am not aware of too many Christians doing that.

Whether this person is in fact doing this remains to be seen. Well done if he is, but this is generally not the case at all. But more can be said. To alert people to the very real threat of Islamic imperialism is hardly “fear mongering”. It is called facing reality and speaking the truth.

We had the same clueless wonders telling us the same thing when Communism and Nazism were killing millions. To warn people of what these evil ideologies were up to often met with the same idiotic reaction. And because of that, even more millions of people died.

The refusal to face reality simply means that we have blood on our hands. We are responsible – at least indirectly – for the death and enslavement of millions when we refuse to call evil what it is, and when we refuse to take our heads out of the sand.

They may glibly talk about no fear, but it is time they got a good healthy dose of some realistic fear. I fear greatly for my country, my society, my family, my children. I know how evil this ideology is. I do not want to see my loved ones beheaded, tortured, enslaved and killed en masse.

I have a healthy and proper fear of that happening, and because of that concern, I am working as hard as I can to protect those that I love. Pretending that they are safe and secure when they are all at risk is the height of moral irresponsibility. And it is hardly to be equated with Christian love and discipleship.

This pseudo-spirituality which ignores reality and puts us all at risk has nothing to do with biblical Christianity. It is a sham and a hoax, and simply leads to more evil being inflicted upon the world. Give me some hard-headed realism any day of the week.

I refuse to keep my head in the sand, and I will not have innocent blood on my hands.

25 Replies to “Heads in the Sand, Blood on Their Hands”