I have written plenty about the Paris jihad attack already. And I have written plenty about Islam in general: if you read just one of my pieces each day it will take you a full year to read them all. And I will keep on writing about the menace of this bloodthirsty political ideology until I am prevented from doing so, either by dhimmi PC cowards in the West, or by the Islamists themselves.

We lost a dozen lives a few days ago – those who were willing to critique this ‘religion of peace’. Many others have been cut down by followers of this demonic religion. And many more will be. That in part explains why so few voices are actually boldly standing up to the Islamofascists and declaring truth. 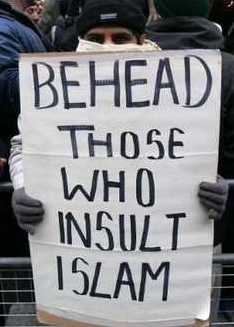 I salute all those who do have the courage and the resilience to stand against this death cult. Others have since spoken out about this latest Islamic outrage. They do a good job of describing the war that we are in. To simply share large hunks of their writing is a worthwhile exercise here.

So let me simply feature three of them from here and abroad. I start with American commentator Matt Walsh who offers a few home truths about the war we are in, and the fact that “Islam is the Most Violent Religion in the World”:

Hopefully we soon come in contact with a dictionary, or any book actually, because if we do we’ll see that a “fundamentalist” is simply someone who follows the fundamentals of a religion. Saying that “Islam isn’t the problem; fundamentalist Islam is the problem” is the same as saying “Islam isn’t the problem; the basic, fundamental nature of it is the problem,” which is the same as saying “Islam isn’t the problem; Islam is the problem.”
And although it might make us feel better to assume that no culture and no religion carries its own unique flaws and pitfalls, the fact remains that Christians and Jews are not often found brutalizing innocent civilians in the name of their religion. And if such an anomaly were to occur, it would be quite easy to tell that the murderous Christian is not a fair representative of his Creed. After all, his Savior spoke rather extensively about the need for peace and mercy. His Savior also wasn’t a militant figure in His own right, killing infidels and taking child brides along the way.
Rather, our Savior told us to turn the other cheek, and that’s what Christians have consistently done. They were pursued, captured, beaten, killed, and made into lion’s food for 300 years before they finally emerged as a dominant religion. If Christianity is inherently violent, it would have been born in violence and spread through violence, but it wasn’t. Unlike Islam.
These are the simple facts, and I’ve pretty well had my fill of these friendly people, with their polite ways, who are so terribly tolerant that they feel like they have to pretend that, somehow, mysteriously, the impression every rational human being on Earth has — that Islam is more violent than other religions — is off-base. They can’t explain why it’s off-base, they can only offer some trite platitude about how the violent Muslims are not “true” Muslims.
Bull crap, you cowards. There is disagreement about the “true” nature of every religion. Put 100 Christians of different denominations in a room and they’ll argue over virtually every aspect of their faith. What they won’t do, however, is debate whether they’re supposed to be out killing cartoonists, shooting up schools, murdering soldiers at the Canadian parliament, or taking hostages at a cafe in Sydney. Only one religion has to even entertain that discussion. And that, to me, clearly indicates some very serious and inherent flaws.
And, please, don’t tell me that Muslims tend to be violent because they’re a historically oppressed people. All religions have been oppressed at one time or another, but Muslims have also always controlled wide swaths of the globe. Ever hear of the Ottoman Empire? And don’t try to work the Crusades into this conversation, unless you want to prove my point for me. The Crusades were waged against Muslim aggressors after several hundred years of persecution at the hands of Arabic forces. The Crusades were a war of defense, sparked, as usual, by Muslim conquest.
No, there’s no way around this. Islam is more violent than any religion that’s ever existed anywhere.
We have to face that fact. Muslims especially have to face it.
And then we can take the next step, whatever that is.

Closer to home, Australian writer Rita Panahi gets right to the point:

The time for weasel words and treading on eggshells is over. We owe it to the growing number of victims to open our eyes and acknowledge the unmistakable reality that radical Islam and Western values cannot coexist peacefully.
These extremists despise our way of life; our freedom, openness and diversity are an affront to their despotic, backward attitudes.
We must stop pretending that these incidents have nothing to do with Islam. They quite clearly have everything to do with extremist Islam and the sooner we admit this truth the better we can work to protect our people and values from this ever-present scourge.
Islamic extremism is a global problem that moderate, peaceful Muslims need to unconditionally condemn and help solve instead of engaging in games of deflection.
The viciousness of these subhuman savages was on display on the streets of Paris as they walked up to an injured policeman lying helpless on the ground and shot him dead at point-blank range without missing a step. It mattered not that Ahmed Merabet was himself a Muslim. They didn’t care that his arms were raised in surrender; he was shown no mercy.
These are not people who can be reasoned with or counselled into adopting our values of humanity, tolerance and liberty. We in the West must stop blaming ourselves for these acts of brutality. There are those among us, the so-called “progressives”, who seek to explain the behaviour of terrorists by pointing the finger at the victims.

And another American, Bruce Thornton, provides some fitting words in conclusion:

The truth is, many Muslims see the whole Western political order as radically different from––and in their view, inferior to––that of Islam. The cultural cargo of human rights, tolerance of confessional diversity, individual autonomy and self-determination, and political freedom is incompatible with the traditional Islamic doctrine that a divinely bestowed shari’a law is the only legitimate social-political order that can create the best life in this world, and ensure the enjoyment of paradise in the next.
But this truth about Islam’s conflict with liberal democracy––a truth documented in 14 centuries of Islamic history and doctrine, and supported by majorities of Muslims worldwide–– is repeatedly denied by Western governments and intellectuals….
This country’s responsibility is to protect our citizens and interests, and to do that we must awake from our delusional slumbers. We must stop apologizing for our alleged historical crimes, stop the self-censorship and agonizing over the hurt feelings of those trying to kill us, stop peddling “religion of peace” fairytales, and stop indulging the “profiling” angst and Islamophobia canard. Most important, we must start basing our policies on truth and common sense, and start taking action to defend our political principles like freedom, individual rights, and tolerance, rather than just talking about them.

Yes, all the free and democratic nations in the West need to wake up and start getting some resolve to deal with the greatest enemy we currently face. If we don’t, we will not be around for much longer to offer anything of value to our children and grandchildren – nothing but slavery, death and misery.