So, yet more dead men and women in France, because of the religion of peace. While the two jihadist brothers are also now dead, along with another one in East Paris, this is of course not the end of the matter. Since 9/11 there have been nearly 25,000 Islamic terror attacks.

That is 25,000 in just 13 years. And I have not even mentioned the Islamic genocide in Africa, where Boko Haram has just slaughtered 2,000 people in one day. On Wednesday an entire Nigerian village was attacked and burned down by these Islamic thugs. Yet the media is largely silent about this. 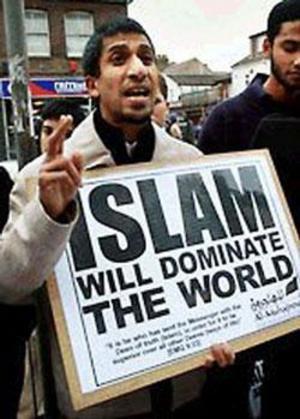 Perhaps the only thing worse than being in an actual war is to not know you are in a war, and thus to lose by default to your enemies without even putting up a fight, or offering any resistance. If you are unable or unwilling to even recognise that you are in a war, then you have lost already.

And the truth is, we are in a war to the death with Islam. Back in 1993 political scientist Samuel Huntington penned an article entitled “The Clash of Civilizations?” which he turned into a book in 1996. He said the West was battling various civilisational forces, including Islam.

It is indeed a battle of civilisations, but I agree with Geert Wilders who says it is really a battle between civilisation and barbarism. Either a free, prosperous, democratic and pluralistic West survives, or an archaic, bloodthirsty, seventh-century ideology and death cult prevails.

But our clueless leaders keep insisting that the daily carnage wrought by devout Muslims screaming Allahu Akbar has nothing to do with Islam. US President Obama of course has long played down the Islam angle, and has done all he can to defend Islam. Even with the latest Islamic attacks he refuses to use the “I” word.

With clueless wonders like this, no wonder we are losing the war. The first step in attempting to win a war is to properly and accurately identify the enemy. If we fail to do that, we are doomed from the outset. And that explains a whole lot.

Fortunately a few leaders are not so naive and sucked into dangerous dhimmitude. Canadian Prime Minister Stephen Harper for example said that these jihadists had declared war on the rest of the world: “I don’t say this with any particular pleasure or excitement, but it is a fact. The international jihadist movement has declared war. They have declared war on anybody who does not think and act exactly as they wish they would think and act.”

And some sober voices have been willing to speak truth here. In today’s Australian a bit of sanity prevailed with someone who knows exactly what she is talking about, Ayaan Hirsi Ali. She says in part:

If there is a lesson to be drawn from such a grisly episode, it is that what we believe about Islam truly doesn’t matter. This type of violence, jihad, is what they, the Islamists, believe. There are numerous calls to violent jihad in the Koran. But the Koran is hardly alone. In too much of Islam, jihad is a thoroughly modern concept. The 20th-century jihad bible, and an animating work for many Islamist groups today, is The Quranic Concept of War, a book written in the mid-1970s by Pakistani general SK Malik. He argues that because Allah himself authored every word of the Koran, the rules of war contained in the Koran are of a higher calibre than the rules developed by mere mortals.
In Malik’s analysis of Koranic strategy, the human soul — and not any physical battlefield — is the centre of conflict. The key to victory, taught by Allah through the military campaigns of the prophet Mohammed, is to strike at the soul of your enemy. And the best way to strike at your enemy’s soul is through terror. Terror, Malik writes, is “the point where the means and the end meet”. Terror, he adds, “is not a means of imposing a decision upon the enemy; it is the decision we wish to impose”.
Those responsible for the slaughter in Paris, just like the man who killed the Dutch filmmaker Theo van Gogh in 2004, are seeking to impose terror. And every time we give in to their vision of justified religious violence, we are giving them exactly what they want.
In Islam, it is a grave sin to depict visually or in any way slander Mohammed. Muslims are free to believe this, but why should such a prohibition be forced on non-believers?
In the US, Mormons didn’t seek to impose the death penalty on those who wrote and produced The Book of Mormon, a satirical Broadway send-up of their faith. Islam, with 1400 years of history and about 1.6 billion adherents, should be able to withstand a few cartoons by a French satirical magazine. But, of course, deadly responses to cartoons depicting Mohammed are nothing new in the age of jihad.
Moreover, despite what the Koran may teach, not all sins can be considered equal. The West must insist that Muslims, particularly members of the Muslim diaspora, answer this question: What is more offensive to a believer — the murder, torture, enslavement and acts of war and terrorism being committed today in the name of Mohammed, or the production of drawings and films and books designed to mock the extremists and their vision of what Mohammed represents?

We appease the Muslim heads of government who lobby us to censor our press, our universities, our history books, our school curriculums. They appeal and we oblige. We appease leaders of Muslim organisations in our societies. They ask us not to link acts of violence to the religion of Islam because they tell us that theirs is a religion of peace, and we oblige. What do we get in return? Kalashnikovs in the heart of Paris.
The more we oblige, the more we self-censor, the more we appease, the bolder the enemy gets. There can only be one answer to this hideous act of jihad against the staff of Charlie Hebdo. It is the obligation of the Western media and Western leaders, religious and lay, to protect the most basic rights of freedom of expression, whether in satire or any other form. The West must not appease, it must not be silenced. We must send a united message to the terrorists: Your violence cannot destroy our soul.

Finally, someone I have never heard of before, but who seems to have a big following, has made some real sense on this – especially in the light of brainless Christians who are utterly without a clue here: Clayton Jennings wrote this just recently:

I’m sorry.
Yesterday I posted a picture that created a lot of controversy. The picture said “What’s the difference between Jesus and Muhammad? Jesus said, ‘I died for you.’ Muhammad said, ‘Kill for me.’ I lost a lot of followers and was asked to delete the picture and make an apology. I’m here to apologize. I’m sorry… and this is why.
– I’m sorry that people are so easily offended by the truth.
– I’m sorry that we live in a society that tries to force you to be politically correct even to the point of remaining silent in the face of evil.
– I’m sorry that so many claimed I attacked Muslims when in fact I never said anything like that. I have Muslim friends. I love them. I care about them enough to tell them that the person they follow is violent and evil and that they should read the Quran instead of remaining blind to the truth. I’m sorry you’re so quick to rush to judgment and negate the facts.
– I’m sorry that many people who claim to be Christians don’t realize that Jesus came to divide, speak truth, and stand for what was right. The same Jesus you say “would never call out Muhammad” was the same Jesus who flipped tables and drove people out of the Temple – sounds loving, right?
– I’m sorry that the same people who commented about Muhammad being peaceful have never taken time to read the 100+ verses in the Quran that demand violence and murder in the name of Islam. I’m sorry.
– I’m sorry that I keep forgetting that following Jesus and being bold won’t gain you followers or friends, and I’m sorry that you’re upset that I’m not bothered by that, at all.
– I’m sorry that men, women, and children are murdered around the world because a false religion told them to do it over 100 times in the Quran. I’m sorry.
– I’m sorry I didn’t post that picture sooner than I did.
– If you’re mad that I shared LOVE by calling out HATE, I’m not sorry.
There is an “unfollow” button at the top of this page. I won’t be sorry if you press it. I don’t care about popularity or being politically correct. I care about serving Jesus, because only CHRIST loved us enough to die for us. ?#?TellTheWorld?