I have written often before about a church paralysed with fear, cowardice, compromise and conformity to the world. Where are the heroes who will stand against the surrounding pagan culture and stand strong for Jesus? And where are the godly men who will take a stand? Why does it always seem to be women who are standing up and showing some Holy Ghost boldness?

I have written before about brave Christine Weick, and how she basically single-handedly took on the Muslim takeover of a Christian church in Washington DC last year: billmuehlenberg.com/2014/11/15/away-with-you-spineless-christian-men/

Well, it seems she is at it again. I want very much to say that she has more courage than most men I know. She has far more testicular fortitude than the great majority of folks in our pews – and pulpits – today. I say she is a champion. I would much rather have one of her (as imperfect as she may well be) than a hundred of our typical Christian church mice men who will never rock the boat, never speak up, and never risk anything for Jesus Christ. 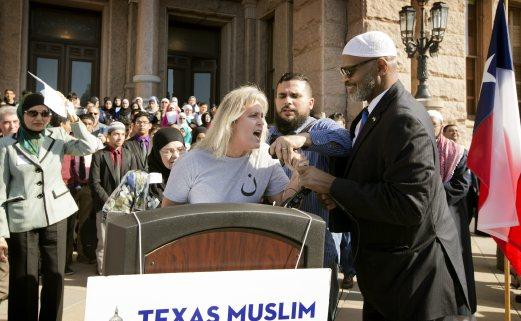 So what is it that she has done this time? Well, she is again proclaiming Jesus Christ when Muslims are trying to take over a once great Christian nation. One news report put it this way:

Texas Muslim Capitol Day, which began in 2003, is organized by the Texas chapter of the Council on American-Islamic Relations and brings members of Muslim communities in Houston, Dallas and other areas of the state to the Capitol to learn about the political process and meet state lawmakers. Texas has the eighth-largest Muslim population in the United States, with more than 420,000 Muslims residing in the state, according to estimates from the Texas State Historical Association. Even before participants in Thursday’s event — about 100 Muslims, mostly children — could get to lawmakers’ offices, they encountered opposition from a group of about 25 protesters outside the Capitol holding signs. One said, “Radical Islam is the New Nazi.” Another said, “Go Home & Take Obama With You.” The Muslim group held a press conference on the South steps of the Capitol, where one of the protesters yanked the microphone from an event organizer, shouting, “Islam will never dominate the United States and by the grace of God, it will never dominate Texas.”

That protester was Christine Weick. She has just told her story elsewhere, and I present it here:

Here is my story of today. May God get the glory of proclaiming His name!
Standing for the Lord in Texas
Coming back from two Muslim conferences in Garland and Houston, Texas, I learned about yet another event planned only a week and a half later in Austin, the Capitol. I felt like Texas was another target in the sight of the Muslim agenda. After meeting many fellow Christian believers and Patriots I quickly signed on to the event in Austin. I teamed up with my new friend Liz and headed to the Capitol.
The weather on January 29, was perfect. When we walked to the Capitol grounds that morning, a small group was already in place with signs proclaiming Jesus Christ and American patriotism.
The podium and microphone were already set up with a “Texas Muslim Capitol Day” sign hung on the front of the podium.
The Muslims were beginning to arrive, by the busload. They had planned to bus in as many as would attend, from all over Texas. We were obviously outnumbered and that alone made a statement for the news media who were also gathering to record the event. Our group of “standers” probably numbered about 50. The Muslims bragged they had hundreds.
I stood with my sign in the area designated for us with the other “standers”. I really had no intention of speaking at all when I arrived. But when I had seen the podium and open microphone… well maybe I would!
Someone near me agreed to hold my sign and I walked past the officers and went towards the Capitol steps and ‘mingled in’. I removed my cap that said “Israel” in colorful letters – it just wouldn’t blend very well, obviously.
The speeches were to begin at 9:00am and they delayed the start until 10:30am, to allow for those who were late to arrive in time for the speeches. About ten speakers stood around with their notes in hand, as I continued to wait along with them. No one seemed to think I was out of place.
The media was setting up the cameras facing the podium and the steps. My friend Liz found me and I told her what I planned to do. I asked her to tell the group to pray for me and also gave her my keys to my SUV. I instructed her to take care of my vehicle in case I was arrested. Then I prayed.
Someone from the Muslims told everyone to stand behind the podium and fill up the Capitol steps (all on purpose for the media). The speakers were told to line up in the front – so I did too!
A woman began her speech and commented on how wonderful it was for the SEVENTH annual event for Muslim Capitol Day. She mentioned her affiliation with CAIR, and that alone should anger every American! That’s when I approached the podium.
I grabbed the mic with both hands. And said, “I proclaim the name of the Lord Jesus Christ over the Capitol of Texas! I stand against Islam and the false prophet Mohammad! Islam will never dominate the United States and by the grace of God it will not dominate Texas!” Two Muslims tried to remove me, but I held on to the mic tightly – I nearly toppled over the podium! I intended to finish what I started to say.
The small group that I left holding their signs, erupted in cheers! They were not silent anymore! They continued to heckle the speakers at everything that was said by them. I was allowed to join them after my speech, no arrest, no problems at all with security. I actually think the officers enjoyed the American spirit coming from a passionate small group of ‘standers’.
The irony I find in all of this is that the Capitol would not offer a podium or microphone to the Muslims, so they provided their own. Well, I honored my Lord Jesus Christ by using their own equipment!
We made a difference! The Lord was honored first! Allah was knocked off his block! Praise God!
Rise up Christians. Rise up Americans. Rise up for GOD and COUNTRY!

Christians need not agree with all such protests – how it was done and so on. That is not the point. What I want to emphasise here is that at least a few Christians are as willing as Muslims are to stand up for what they believe in. And I happen to agree with her.

America was certainly not founded by Muslims, and America is not an Islamic country. It had a very definite Christian beginning, and that heritage is well worth defending and promoting. Whether Christians feel called to grab a mic and proclaim Jesus Christ or not, at least we know where this woman stands.

And given all the silent wonders out there of whom you would never know where they stand, at least Christine is unashamed of the gospel and her Lord. Discuss all you like the various tactics and strategies we might or might not use in such a situation, but do not condemn her for her boldness and willingness to take a stand when most spineless believers would never even dare to do so.

6 Replies to “Courageous Saints in an Age of Spineless Wonders”