One would wish that the angry atheists came up with something new for a change – something original or something clever. Instead, all we get from them are the same old tired clichés and bumper sticker objections that have been raised ad infinitum, ad nauseam, and have been carefully dealt with in equal measure.

There certainly is nothing new under the sun when it comes to these angry misotheists, and one wonders why they keep getting a free run and incessant air time when all they can come up with are such stale, tired and vacuous objections to the God they claim does not even exist. Indeed, why do they spend their entire lives getting all worked up about such a non-existent being?

Just who is being irrational here? But we have yet another example of these guys shooting off at the mouth, pretending to be wise, although actually proclaiming themselves to be fools (Romans 1:22). And as is often the case, the very thing that the Apostle Paul pairs together in this regard we find with this guy. 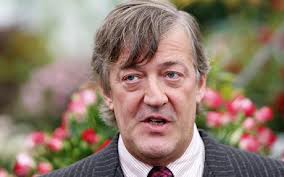 I refer to English actor and author Stephen Fry who is both an atheist and a homosexual. He recently “married” his young male lover, thirty years his junior no less. How often do we find that those lashing out against God are the same ones seeking to justify their immoral lifestyles? The two certainly go together.

He recently was interviewed on the TV show, The Meaning of Life. Here is how one article describes this encounter:

The weekly show features discussions about the purpose of life, religion, and what happens after death. A clip released ahead of Sunday’s screening saw Fry discussing his views on God from his perspective as an atheist. “Suppose it’s all true, and you walk up to the pearly gates, and are confronted by God,” asked Bryne. “What will Stephen Fry say to him, her, or it?” The 57-year-old replied: “I’d say, bone cancer in children? What’s that about? How dare you? How dare you create a world to which there is such misery that is not our fault. It’s not right, it’s utterly, utterly evil. Why should I respect a capricious, mean-minded, stupid God who creates a world that is so full of injustice and pain. That’s what I would say.”
Byrne’s second question, “And you think you are going to get in, like that?” only served to fuel his fervour. “But I wouldn’t want to,” Fry insisted. “I wouldn’t want to get in on his terms. They are wrong. Now, if I died and it was Pluto, Hades, and if it was the 12 Greek gods then I would have more truck with it, because the Greeks didn’t pretend to not be human in their appetites, in their capriciousness, and in their unreasonableness… they didn’t present themselves as being all-seeing, all-wise, all-kind, all-beneficent, because the god that created this universe, if it was created by god, is quite clearly a maniac… utter maniac, totally selfish. We have to spend our life on our knees thanking him? What kind of god would do that? So, atheism isn’t not just about not believing there’s a God, but on the assumption there is one, what kind of God is he?”
Visibly staggered by Fry’s answer, Byrne said: “That sure is the longest answer to that question I ever got in this entire series.”

Yawn. Just another hot-headed atheist who thinks he knows it all. So smug. So pompous. So arrogant. So self-satisfied. So wise in his own eyes. And so deadly wrong. As I say, these accusations have been around for ages now, and have been dealt with time and time again.

The first has to do with the so-called problem of evil: how can a good God allow suffering, etc. It has been raised countless times and it has been dealt with countless times, yet these guys act as if they just thought up this objection, and that it is unassailable.

Well sorry, but it is neither fool-proof nor a knockout blow against theism. Indeed, if Fry were half as clever as he pretends to be, he would know about the library of work out there satisfactorily dealing with these sorts of objections. And he would know that a growing number of philosophers do not find much weight in these objections, certainly in their logical formulation (referred to as the deductive problem of evil).

Known as the issue of theodicy (defending the ways of God to man in relation to evil and suffering), there has been oceans of ink spilled on this. I happen to have already penned 35 articles on this, so I will not repeat myself here: billmuehlenberg.com/category/apologetics/theodicy/

But just a very few quick words nonetheless. This world of course is not how God intended it to be. He made all things good, and intended a wonderful love relationship between creature and Creator. But sin entered the world, spoiling everything. That is why we now have bone cancer and suffering and misery.

But God did not leave us alone in this situation. He sent his own son to make things right, to restore our broken relationship, and to eventually put an end to all evil and suffering. And he did this by suffering himself, by entering our world and taking upon his perfect person all our sin and its deserved punishment.

So this ludicrous idea that God is somehow aloof from, and totally indifferent to, our plight and our suffering could not be further from the truth. No one cares more, and has gotten more involved in our dilemma, than God. And it is for that very reason that we do owe him our lifelong gratitude.

This has absolutely nothing to do with God being a “maniac, totally selfish” as Fry so fool-heartedly claims. Anyone who would do so much for us when we don’t deserve it in the least most certainly is worthy of our praise and worship and attention both now and for eternity.

What a wonderful God we serve: one who loves us so much that he refuses to leave us in the mess we have gotten ourselves into. He has done all he can to redeem us, to deliver us, to set us free, and to put us back into right standing with Him.

But those who refuse to accept this gracious and free gift have nothing to complain about. Indeed, they will only have themselves to blame for the hellhole they have made for themselves. And those who lash out the most against such a gracious and loving God are those who are the most bound by their own rebellion, sin and selfishness.

At the end of the day, it is not intellectual objections that keep atheists from coming to Christ, but their moral condition. The simple truth is, they prefer their sin (in this case, homosexuality included) to the holiness and purity of the God who is there.

BTW, no wonder Fry prefers the mythic Greek and Roman gods. They were really just glorified men. They were just as petty and capricious and finite and faulty as we are. It is ever so much easier to deal with gods like that than with the real, true and living God: the God who is totally exalted above his creation, without blemish or fault, the one who holds us all morally accountable.

These atheists do not need more answers, more theodicy, more apologetics. They need to stop their rebellion and stop shaking their fists at their Creator (and eventual Judge). As C. S. Lewis once put it, “Fallen man is not simply an imperfect creature who needs improvement: he is a rebel who must lay down his arms.”

Until Fry does that, he is simply sealing his own fate. Tragically, he may well fry forever, if he persists in his hatred of God and in his arrogant vaunting of self. But it need not be this way. As always, we must pray for people like Fry. Pray that he eventually will see the light, turn from his sin and rebellion, and become a new creation in Christ.

27 Replies to “Yet Another Arrogant Atheist Rant”