Yesterday I wrote an article about the wonderful grace of God. But in that same piece I also mentioned that the Bible clearly warns us about not presuming upon the grace of God, or perverting it. Yes God is gracious, but we cannot abuse and misuse this matchless grace.

This was reinforced to me recently in my reading through the Pentateuch once again. I have been reminded of these truths as I read about one episode mentioned in several places there. In Leviticus 10:1-5 and Numbers 3:1-4 we read about the tragic case of Nadab and Abihu, the two sons of Aaron. 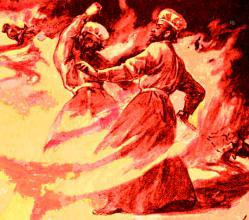 First a bit of background: God had appointed, ordained and consecrated Aaron and his four sons to be priests, as we read in Lev. 8. In Lev. 9 we read about their first day of duty in service to the Lord. After the sacrifice we find this in verse 24: “Fire came out from the presence of the Lord and consumed the burnt offering and the fat portions on the altar. And when all the people saw it, they shouted for joy and fell facedown.”

Yet in Lev. 10:1-2 we read these words: “Aaron’s sons Nadab and Abihu took their censers, put fire in them and added incense; and they offered unauthorized fire before the Lord, contrary to his command. So fire came out from the presence of the Lord and consumed them, and they died before the Lord.”

We have further accounts of this in Numbers 3:1-4 and 26:60-61. They offered ‘strange fire’ or ‘unholy fire’ or ‘unauthorised fire’. Whatever exactly this meant (and there are a number of possibilities here but we cannot be certain), it involved doing something wrong, or in the wrong way, or at the wrong time, or with the wrong attitude.

It amounted to disobedience to the commands of Yahweh. And for this, death was the instant judgment. Being involved in the worship of a holy God meant fully doing things God’s way with fear and reverence and complete obedience.

Aaron’s sons did not do this, and they paid the price for it. So here we have complete elation for Israel one moment, immediately followed by complete devastation. The same fire of God that was used on the sacrifice was used to deal with the rebellious priests.

This is hard for us to grasp, but it involved the seriousness of dealing with a holy God. Gordon Wenham discusses what exactly the ‘strange fire’ might be, then remarks, “What really mattered is stated next: it was fire which he had not commanded them. The whole narrative from 8:1 has led us to expect God’s ministers to obey the law promptly and exactly. Suddenly we meet Aaron’s sons doing something that had not been commanded.”

We read of similar things happening elsewhere in the OT, such as Gehazi and King Uzziah being struck with leprosy (2 Kings 5, and 2 Chronicles 26). God takes very seriously indeed such matters, and so should his people, especially his ministers. Jay Sklar offers this word of explanation:

To desecrate the Lord’s holy property was such a serious sin that the Lord could become angry with the whole community, just as he did when Achan stole from his holy property (Josh. 7:1; 22:20; cf. at Lev. 4:3). This was not the capricious response of a quick-tempered deity. Rather, it was meant to underscore to the Israelites his holy hatred of sin, and also to alert them to the presence of evil in their midst, so that they could address it properly and maintain life-giving fellowship with him.

Or as Derek Tidball comments,

God is passionate about living among his people and will not permit anyone to prevent him from doing so by defiling his dwelling-place, not even priests. God punishes Nadab and Abihu because, as priests, they worked in his immediate presence. . . . Scripture speaks with a united voice; the closer one is to God, the more careful one must be about his holiness and honour; the greater the privileges one has received, the more careful one must be to fulfil one’s responsibilities.

In his comments on this passage John Calvin said this:

The severity of the punishment, therefore, would not please those arrogant people, who do not hesitate superciliously to criticize God’s judgments; but if we reflect how holy a thing God’s worship is, the enormity of the punishment will by no means offend us. Besides, it was necessary that their religion should be sanctioned at its very commencement; for if God had suffered the sons of Aaron to transgress with impunity, they would have afterwards carelessly neglected the whole Law. This, therefore, was the reason of such great severity, that the priests should anxiously watch against all profanation.

“But,” I can hear the critics retort, “that was the Old Testament. God back then was a grumpy tyrant who was into judgment, but the New Testament God is a God of love and grace.” Um, no. As we read in Malachi 3:6: “I the Lord do not change.” God’s character remains eternally constant.

Jesus is the same yesterday, today and forever, as we are told in Hebrews 13:8. God is always fully gracious and always fully holy. We find this to be true in both Testaments. And we find similar episodes of judgment in the NT. Consider the similar case of instant judgment on Ananias and Sapphira for example (Acts 5:1-11).

Other NT examples of this include Elymas being struck blind (Acts 13:4-12); believers handed over to Satan for the destruction of the flesh (1 Cor. 5:1-5); and Hymenaeus and Alexander handed over to Satan to be taught not to blaspheme (1 Tim. 1:20). As Hebrews 10:31 states, “It is a fearful thing to fall into the hands of the living God.”

Wenham, commenting on the Leviticus passage, says that this episode of judgment, and others like it,

are upsetting to the cosy bourgeois attitudes that often pass for Christian. In many parts of the Church the biblical view of divine judgment is conveniently forgotten or supposed to be something that passed away with the OT. Heine’s famous last words, “God will forgive me. That’s his job,” have become the unexpressed axiom of much modern theology. This short story is therefore an affront to liberal thinkers. It should also challenge Bible-believing Christians whose theological attitudes are influenced by prevailing trends of thought more often than they realize.

Yes he is quite right. Sadly much of the contemporary church has lost the notion of God’s holiness and God’s purity. As a result we are often losing our way as we seek to minister to God in worship. I shudder sometimes when I think of so much of our worship today in God’s house. How glib, trite, trivial and lightweight so much of it seems to be. A. W. Tozer spoke often about worship and a holy God. His words offer a fitting conclusion to this piece:

God calls us to worship, but in many instances we are in entertainment, just running a poor second to the theaters. That is where we are, even in the evangelical churches, and I don’t mind telling you that most of the people we say we are trying to reach will never come to a church to see a lot of amateur actors putting on a home-talent show.

There is grief in my spirit when I go into the average church, for we have become a generation rapidly losing all sense of divine sacredness in our worship. Many whom we have raised in our churches no longer think in terms of reverence – which seems to indicate they doubt that God’s Presence is there…. Much of the blame must be placed on the growing acceptance of a worldly secularism that seems much more appealing in our church circles than any hungering or thirsting for the spiritual life that pleases God. We secularize God, we secularize the gospel of Christ and we secularize worship.

The Church has surrendered her once lofty concept of God and has substituted for it one so low, so ignoble, as to be utterly unworthy of thinking, worshiping men. This she has not done deliberately, but little by little and without her knowledge; and her very unawareness only makes her situation all the more tragic. The low view of God entertained almost universally among Christians is the cause of a hundred lesser evils everywhere among us.

We need to go back to Scripture and discover afresh who this God really is that we claim to follow. Is he the God of the Bible, or simply something we have made in our image? Given the story we have just been discussing, this is an important question for all of us to be asking ourselves.

7 Replies to “Holiness, and the Grace of God Abused”