I would like to begin this piece by informing you that God spoke to me. Yes he did, and this is what he told me: “Bill I want you to know that adultery is just peachy.” And this is not the first time he has spoken to me and reassured me that what I am doing is right. 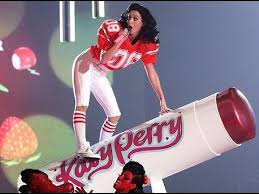 So if you ever hear someone telling you that God told them to sin or break his commandments or do something which violates his character, you better avoid that person like the plague. Well, sadly, it seems that this very thing has just happened with pop princess Katy Perry. As one report states:

Katy Perry revealed she received a message from God right before she performed at the Super Bowl. The “Dark Horse” singer told E! News host Ryan Seacrest that she prepared for her half time show by leaning on her faith. “I over prepared myself and did a lot of prayer and meditation,” Perry told Seacrest at the 57th annual Grammy Awards.
She added, “It’s funny, I was praying and I got a word from God and He says, ‘You got this and I got you.’ And then I was on top of the lion and a guy, a random guy, just looked on me with a headset that I’ve never communicated with before and he just looked me straight in the eyes and said, ‘You got this.’ And I was like, ‘Oh, this is God confirming I can do this.”

Now I did not happen to see her performance, so a quick Internet search revealed this: “Katy Perry, 30, just shined like a star during the 2015 Super Bowl halftime show inside the University of Phoenix stadium in Arizona. Singing just a handful of hits, including ‘Firework,’ ‘California Girls,’ and ‘I Kissed A Girl,’ Katy brought down the house on one of the biggest stages ever seen during a halftime show.”

OK, so let me get this straight: God told Katy to promote lesbianism to the whole world during her performance? Um, for some reason, I just don’t think so. Now lest people think I am making a mountain out of a molehill here, let me remind you that the singer has already told us of her rejection of biblical Christianity.

As I quoted in another article about her:

“Pop singer Katy Perry opened up about her views on God and theology in a recent interview with Marie Claire, telling the magazine that she’s no longer Christian and that she doesn’t believe in heaven, hell or ‘an old man sitting on a throne.’
“Perry did tell the outlet, though, that she believes in a higher power — a paradigm that holds her accountable. ‘Accountability is rare to find, especially with people like myself, because nobody wants to tell you something you don’t want to hear,’ the singer said. ‘I actually don’t trust people who start to turn on me because they get scared of telling me the truth.’
“Perry also rejected traditional theological labels, but said that, though she has left her evangelical faith behind, she still feels close to the Lord. ‘I’m not Buddhist, I’m not Hindu, I’m not Christian, but I still feel like I have a deep connection with God,’ she said.”

And in another piece I discuss her overtly occultic performances: https://billmuehlenberg.com/2014/01/28/no-neutrality-here-katy-perry/

From her own lips it is clear that she has departed from the Christian faith of her family. Whether she ever had such a faith herself is rather unclear. But she has been quite outspoken about rejecting her evangelical past. And her raunchy performances are a good indication that she is now not a true disciple of Jesus Christ.

So why even discuss this at all? Well, she is of course hugely popular, and millions of young girls especially hang on to her every word. She is a role model for so many impressionable young people, so if she publicly bags Christianity, that is going to have a real impact on others.

And if she publicly promotes the homosexual lifestyle, that too will impact many. And to make matters worse, when she claims God is telling her to do all this, that is really a worrying development. It would have been one thing if she said Satan told her to do this, or if she got some weird spiritual vibes about all this.

But claiming that God told her to do something which he would never tell anyone to do is deception of the highest order. Not only is Perry deceived big time, but as I said, she will drag down millions of people with her in her deception. Of course Scripture speaks about all this quite often.

Paul in Romans 1 speaks about those who suppress the truth in unrighteousness. He even uses the example of homosexuality to illustrate this. It seems Perry is just making a good case for just how correct Paul was in his assessment: stomping on truth is tied in with pushing unrighteousness and immorality.

Another text which we can appeal to here is 2 Thessalonians 2:9-12 where Paul says this:

Once again we see the very strong connection between the suppression of truth and being given over to wickedness and unrighteousness. The two always go together. The Bible stresses the importance of truth over and over again. The truth sets us free, we are told. And truth keeps us from falling into the deception of the enemy.

Sadly Perry has been deceived here, and her very public flaunting of immorality and sinful sexuality indicates just how far she has wandered from the truth. As is always the case in these situations, we must pray for Perry and others like her.

Whether or not she was once a Christian is not clear. But we can pray that whatever her actual past condition, that she sees the light, and comes to Christ in faith and repentance. She needs Jesus just as we all do, and she needs to stop allowing herself to be deceived and to deceive so many others.

God did not tell her to go out and glamorise sin and promote unrighteousness. What he would tell her is that he loves her too much to allow her to keep going on this hell-bound path, and that if she is willing to turn around and renounce her sin, a new life is waiting for her.

All the fame in the world is not going to be worth one lousy cent when she one day stands before her maker and her judge. I hope and pray that she gets right with God now. If not, it will be a very sober day indeed when she does appear before him.