Disclaimer: I have not read the lousy books and I do not plan to see the lousy movies – so shoot me already. But I don’t need to eat strychnine or drink poison to warn others about it. Moreover, when others have checked it out, and I value and trust their opinion, then I am happy to run with their expertise on matters like this.

I am of course referring to the book and soon to be released film, Fifty Shades of Grey. For those who know nothing about this book and film series, this report offers some background: 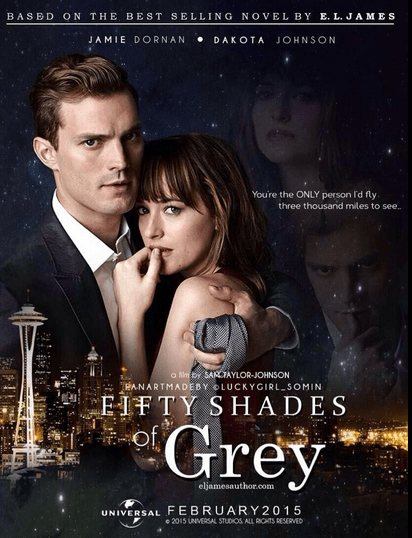 Given such a huge impact with the book, and a likely similar huge impact with the films, it is worth talking about all this. As I say, I defer to others here, and their words are worth sharing. Let me offer two male and two female voices on this. First, Matt Walsh lays out some of his concerns:

To the women of America:
Please do not underestimate the significance of this. Here, now, you have been given the opportunity to grab ahold of our society and drag it back from the precipice. You cannot cure all of our ills, but, if you answer the call, you can at least help us take one small step toward peace and prosperity.
This is truly a seminal moment in our history. The weight of our future, our children’s future, our children’s children’s future, partially rests on the decision you are facing. Your task, ladies, is simple. All you must do is not buy tickets to 50 Shades of Grey when it’s released in theaters on Valentine’s Day. Not one ticket….
If you are a feminist, I can’t possibly understand how a disturbing fantasy about a wealthy man physically dominating a woman could ever be considered acceptable in your circle. Are we sure E.L. James isn’t Bill Clinton’s penname? Does John Edwards have a co-writing credit on this thing? I haven’t checked, but I’m half expecting Woody Allen or Roman Polanski to be listed on IMDb as executive producers. I’ve long struggled to define feminism, but if 50 Shades of Grey makes the cut, then feminism is dead and buried.

And if you are a Christian, you certainly should not be patronising this garbage:

The problem with the sex portrayed in this movie, or in any trashy romance novel you find at the airport, or in many other films and TV shows, or in many actual relationships, is that it’s always self-seeking, never honest, never truthful, never trusting, and never protecting. There is no hope in it, no kindness, no sacrifice. It’s selfish and removed, which makes it stale, which is why people tire of it so quickly and become so bored with it all, which is why they consume so much porn and bounce between so many different one night stands.
Christians might wrestle with these temptations, but they shouldn’t try to make excuses or pretend that it’s OK in this case because they really enjoyed the book. That’s nonsense, a cop out, and they know better.

The Cinderella of this story gives herself to a sadist for her keep. She is a kept and abused woman who consents to it all: bondage, domination, injuries – taken and received. Human beings were not meant to do such things to each other.
Time, of course, cannot bring itself to condemn the film. It has neither the moral authority or discernment to do that. Christians can and should evaluate it, since we have been given a revelation of what is good and evil.
As R.J. Rushdoony said years ago, when a culture rebels against God and his creation mandate (Genesis 1:26; Psalm 8), it immerses itself in sexuality. Sex is severed from family and culture-creation for the glory of God. Sexuality is exalted above all other concerns and personal qualities. As such, virtue is lost and vice is embraced. Every quirky and kinky orientation and activity (see Leviticus 18) is justified because of the thrill it gives empty selves in an otherwise meaningless world. Nerve endings speak louder than conscience.

Deborah Hamilton reminds us that this book/film “Has Nothing to Do With Love”:

According to one report, 20 minutes of the 100-minute film are scenes of graphic sex. And the film carries an “R” rating not only for “graphic nudity” but also for “unusual behavior,” which entails BDSM sex scenes (BD=Bondage and Discipline; DS=Dominance and Submission; SM=Sadism and Masochism).
Religion and culture expert Dr. Alex McFarland (alexmcfarland.com), says the movie is the latest installation in a cultural trend that advances a skewed definition of love.
“Few things are as unthinkable as promoting violent sex and psychological abuse in the name of ‘romance,'” McFarland said. “But it’s hardly surprising that our culture has come to this point when we recognize that for years, sex has been glorified as the ultimate standard of love. And not sex within the God-ordained protection of marriage between one man and one woman, but sex that is simply a means of taking what we want from someone else to gratify ourselves. Fifty Shades of Grey goes beyond even this twisted view of sex and love and elevates sexual abuse as acceptable. This is not only a tragic and dangerous depiction of love but also one of the reasons young people today are growing up with little understanding of real love, mistaking emotions for the sacrificial and often inconvenient commitment love calls for.”

I’d like to debunk 3 of the most common excuses supporting FSOG that I’ve heard so far:
One: It’s not porn, it’s just a bit of fun.
The reason I am calling Fifty Shades ‘pornography for women’ is because it really is just that. The definition of pornography is ‘Printed or visual material containing the explicit description or display of sexual organs or activity, intended to stimulate sexual excitement.’ (Oxford Dictionary) 50 Shades definitely does that, but goes further by romanticising sadistic and masochistic sex as ‘enlightenment’ – which it definitely isn’t.
Bearing this definition in mind, 50 Shades author, ‘E.L. James’ told the Huffington Post; “Well to be honest, it was mostly curiosity. I had just read some stuff about BDSM [bondage-domination-sadism-masochism] and found it really, really hot — an arousing kind of hot. And I got to thinking, ‘What if you met somebody who was in this kind of relationship, in this lifestyle, and who knew nothing about it and probably didn’t want to do it? What would happen next?’ And I just took it from there, really.” (1)
Hmmm. Interesting.
It’s also interesting that the genre of these books is called ‘erotica’ so it’s clearly not light reading for general consumption.
Two: It’s not harmful, it’s female sexual liberation
Australian research shows that by 16 years of age, 100% of boys have been exposed to pornography, with the current average age of exposure to boys being around 11-12 years of age. There are varying studies and statistics regarding female exposure, with some research showing girls reporting a 97% exposure of porn by the age of 16….
I can’t tell you the number of teenage girls who come to me and say; “My boyfriend wants me to do this (insert weird, kinky and potential harmful sexual act) but I don’t feel comfortable with it…” Then they lean in, full of self-doubt and anxiety and ask, “Is there something wrong with me?” How tragic. What type of world do we live in when a young woman questions her own gut instincts? Why isn’t she instead questioning the sexual act being forced upon her, or the guy asking her to perform these acts? This is not women’s liberation, but actually the opposite.
It makes me so angry and sad that teenage girls are questioning themselves and thinking something is wrong with them for not wanting to do those things. This book romanticises these acts, and that is not real life.
Three: If she consented, it’s fine. It’s none of your business!
OK then. Let me apply this same logic to domestic violence. As a counselor, many DV clients often say; “Its fine, its my fault, I deserved it. I forgive him.” The emotional manipulation women are susceptible to, especially by men, cannot be comprehended or underestimated. The female heart desires to love and give ALL, to lay her life down and sacrifice everything for the man she loves. Many words of manipulation have caused women to go far beyond this natural desire, into accepting sexual violence in the bedroom, all because he says ‘he wants it.’ This is not OK! Just because someone consents, doesn’t make it right. No one has the right to harm anyone, even if they supposedly ‘ask for it’.

Here are four voices of sanity in a world going absolutely nuts. The sexual anarchy and moral freefall we are experiencing is destroying our culture, destroying our marriages, destroying our families, and destroying our children. For the sake of all four, please, have nothing to do with this destructive sleaze. And warn others as well.

22 Replies to “Fifty Shades of Sleaze”