One of the biggest problems in the Christian church in the West today is that of antinomianism. The Greek word for law is nomos, and most folks know what the prefix anti means, so this term basically means “against the law” or just plain “lawlessness”.

The term can have various meanings, but theologically speaking it has to do with the belief that the Christian has no real obligation to, or involvement with, God’s law and righteousness. Because we are saved by grace alone, we are no longer under the law in any form, and we need not worry about the law and its demands. 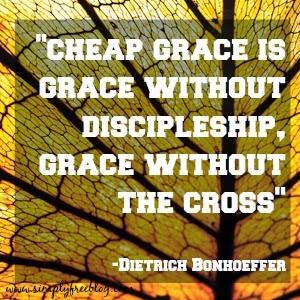 Of course Paul had to deal with this error long ago. In Romans 6:1-2 he wrote: “What shall we say, then? Shall we go on sinning so that grace may increase? By no means! We are those who have died to sin; how can we live in it any longer?”

But in an age of so much shallow preaching, so many selfish and self-centred gospels being proclaimed, and so much dangerous hyper grace teaching being heard, it seems we now have an epidemic of antinomianism in our churches today.

Obligation-free Christian living is all the rage, where believers think that they can do whatever they like, even live like the devil, because everything is covered by God’s love and grace. The very concepts of sin, holiness, the wrath of God, and judgment to come, are almost never heard from so many pulpits today.

It is all about how God loves us unconditionally, his grace is all we need, and we should just enjoy life and have our best self now. That is the mush that is being preached more often than not, and as a result, standards of Christian behaviour seem to be at an all time low.

Christians are so blasé about their walk with the Lord, thinking God just looks down upon them and smiles a lot, that the very basic biblical notions of obedience, sanctification, holiness, and the crucified life are rapidly disappearing. Once again we see here a perfect example of lousy teaching leading to lousy living.

Orthodoxy is vital, as is orthopraxis. But when a false gospel is proclaimed, we will always see it worked out in sinful and disobedient lifestyles. Thus the constant need to guard the gospel, and make sure what we are proclaiming in fact is an expression of biblical truth.

Of course concern about this is not new. In addition to Paul dealing with it 2000 years ago, this has been the constant concern of men of God throughout church history. Let me offer just two voices who had to deal with this. They both warned repeatedly about these issues last century. First, listen to A. W. Pink:

Healthy Christianity can only be maintained where the balance is properly preserved between a faithful exposition of the holy Law of God and a pressing of its claims upon the conscience, and by tenderly preaching the Gospel and applying its balm to stricken hearts. Where the former predominates to the virtual exclusion of the latter, self-righteous pharisaism is fostered; and where the proclamation of the Gospel ousts the requirements of the Law, Antinomian licentiousness is engendered. During the past hundred years Christendom has probably heard fifty Gospel sermons or addresses to one on the Law, and the consequence has indeed been disastrous and deplorable: a light and backboneless religion, with loose and careless walking.

Antinomianism is the doctrine of grace carried by uncorrected logic to the point of absurdity. It takes the teaching of justification by faith and twists it into deformity. The creed of the Antinomian is easily stated: “We are saved by faith alone; works have no place in salvation; conduct is works, and is therefore of no importance. What we do cannot matter as long as we believe rightly. The divorce between creed and conduct is absolute and final. The question of sin is settled by the Cross; conduct is outside the circle of faith and cannot come between the believer and God.” Such in brief, is the teaching of the Antinomian. And so fully has it permeated the Fundamental element in modern Christianity that it is accepted by the religious masses as the very truth of God.

I write all this because on a daily basis I find evidence of this very thing. All around me I see people who profess to be believers who are living just like pagans. They seem to not have the slightest heart for holiness, a passion for purity, or a desire to be fully devoted to God.

Many would have put up their hand at an emotional gospel meeting some time ago, said a brief ‘sinners’ prayer, and now think they are home and hosed with nothing to worry about. They have their life insurance all ready, so now they can go back to living just like they always have.

They sing ten choruses of “Just As I Am” and leave just as they were. No real conversion seems to have taken place, and they are just as lawless now as they were when they were non-Christians. An example of all this which I just came upon today still has me shaking in my boots.

On the one hand it is absolutely unbelievable, but on the other hand it is easily believable. Given all the hyper grace antinomianism swirling all around us, this should not be surprising at all. I refer to Christians and the new book and film series, Fifty Shades of Grey. I just wrote on this here: billmuehlenberg.com/2015/02/10/fifty-shades-of-sleaze/

And as I just wrote elsewhere, “If a ‘Christian’ tells you he/she has no problem reading/watching Fifty Shades of Grey, then I am quite willing to say that they are clearly not disciples of the Lord Jesus Christ.” But what made me absolutely shudder is this:

One of our nation’s leading Christian publishers conducted a survey asking respondents to name the most influential book they had read in the past year. A startling number of women – Christian women – said “Fifty Shades of Grey” was their favorite book of the year. Why is that so noteworthy? Because the “Fifty Shades of Grey” books are a written form of pornography, plain and simple. It’s a book series that’s become nothing short of a cultural phenomenon, having sold more than 100 million copies in just a few short years.

Jim Daly of Focus on the Family continues:

The demand has been so intense a feature film is set to be released on Valentine’s Day weekend and talk of it has flooded mainstream entertainment news shows. There are reports that sex scenes comprise one-fifth of the film. Of course, it would be easy to simply slap a label on the material and dismiss it out-of-hand. But there’s a deeper issue we’d be missing. How and why has pornography ensnared so many women, including Christian women?

Can you imagine that? Women who claim to be followers of Jesus Christ saying this was their favourite book of the year? Not only should they not be reading such filth, but to actually label it as their favourite? What in the world is wrong with these women?

I will tell you what is wrong: they are just deceiving themselves. They think they are Christians but they are not. Anyone who can happily swim in a cesspool of filth and sleaze and claim to be a disciple of Christ is fooling themselves big time.

Now I just happened to have somebody elsewhere throw this line at me: “Actually, many will and have and ARE real Christian women. It’s called temptation and sin and no Christian anywhere is exempt from this. Saying a Christian is not a real Christian because they’ve engaged in something sinful is not what I would think a real Christian would say about another Christian.”

I replied to him as follows:

You miss the point big time. Yes we are all tempted and we all can fall. Our attitude is crucial here: when we sin, do we agree with God and say it is wrong and repent, or do we keep happily sinning, thinking it is no big deal? The attitude here makes all the difference in the world. The real Christian always hates sin and avoids it as much as possible. The fake Christian has no problems at all with indulging in porn like this and even justifying it.
And spare us this unbiblical foolishness that we can never exhort and encourage one another in holiness. If a brother or sister is living in sin, it is our obligation under God to warn them, speak to them, and pray for them. We are to love them enough to confront them.

But this mindset is all around us. Sin is no big deal, because God accepts us just as we are, and makes no demands on any of us. This is antinomianism pure and simple. It is the deadly error of the hyper grace movement. It is cheap grace, and no genuine disciple of Christ should have anything to do with these damnable errors.

Biblical grace never makes excuses for sin. Real grace always leads us to holy living. Anything else is a sham. Let me finish with a few words about real grace versus false grace from some great Christians:

“The grace that does not make a man better than others is a worthless counterfeit. Christ saves His people, not IN their sins, but FROM their sins. Without holiness, no man shall see the Lord.” -Charles Spurgeon

“Grace is the mother and nurse of holiness, not the apologist of sin.” -Charles Spurgeon

“Any concept of grace that makes us feel more comfortable sinning is not biblical grace. God’s grace never encourages us to live in sin, on the contrary, it empowers us to say no to sin and yes to truth.” -Randy Alcorn

“Grace is not simply leniency when we have sinned. Grace is the enabling gift of God not to sin. Grace is power, not just pardon.” -John Piper