I hate to say it, but it grieves me greatly whenever I start thinking about the state of Christianity in America. Every time I hear about what is happening there, it makes me groan within. I sometimes wonder if America is now a lost cause.

America – once the greatest nation in the world – is now so appallingly bad in so many ways, that it hurts simply to think about this once blessed land. And guess who is primarily the fault of this? Yep, the church. Christians by and large are responsible for the horrible mess the country is in. 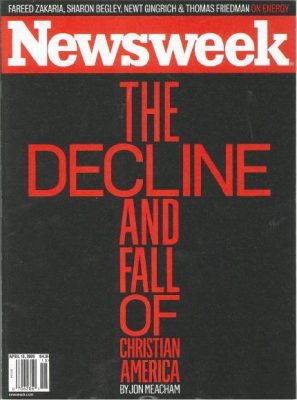 The question is not only, “Is America a goner?” but this as well: “Is the American church a goner?” To spare you the suspense, let me answer the second question immediately by saying, “no it is not,” if we bear in mind the true remnant that God always preserves.

But “yes”, if we look at the great bulk of what passes for Christianity in the US. There is so much wrong with the church in America today that one really does wonder if it is heading down an irrevocable spiral. While many pockets of true disciples of Christ can be found, the great bulk of professing churchianity in the US is as close to what John was talking about as I can find.

I refer to his words in Revelation 3:15-16 : “I know your deeds, that you are neither cold nor hot. I wish you were either one or the other! So, because you are lukewarm – neither hot nor cold – I am about to spit you out of my mouth.” To illustrate my concerns, let me just point out four areas which demonstrate the sorry state of the church in America.

One. Christians and Obama

One of the most shocking things about the sad state of the church in America is the number of clueless Christians who not only voted for Obama the first time, but the second time as well. Here is the most anti-Christian, pro-Islam, pro-abortion, pro-homosexuality POTUS of all times, yet countless Christians supported him, and still support him.

Their complete lack of any sort of biblical discernment tells us all we need to know about why the church is going down the gurgler there so quickly. And they are still blindly supporting the guy. Just consider his absolutely dreadful remarks at the recent Prayer Breakfast. I have discussed that elsewhere:

Although he defended Islam while attacking Christianity – at a Christian event no less – he still has masses of Christian zombie supporters. The number of them defending his remarks utterly astounds me. I expect secular lefties to support him in this, but those claiming to be Christians? Bagging their own faith and siding with the enemy?

And this just in; it is no surprise to many of us of course, but it shows what a despicable man this guy really is:

A former senior adviser to President Obama has confirmed what his most strident critics have said all along: Barack Obama lied to the American people about opposing gay “marriage” to boost his chances of winning the 2008 presidential elections. David Axelrod, a veteran of Chicago left-wing politics who advised Obama during the campaign, makes the admission in a new book Believer: My Forty Years in Politics, which hits book shelves today.

Speaking of homosexuality, the number of Christians, let alone Christian leaders, who have jumped in bed with the homosexual activists is utterly incomprehensible. There seems to be mass deception and delusion going on in our churches.

How else can we account for so many professing believers falling hook, line and sinker for the diabolical homosexual agenda. Scripture is clear about this sin, yet “Christian” leaders are trying to outdo one another in supporting and promoting this sinful and deadly lifestyle.

For example we had one pastor recently tell us that a “divine wind” caused him to go down the road of endorsing and blessing sodomy. I kid you not. The degree of deception and the amount of biblical illiteracy is at an all time high in the church in America.

And all over America true Christians are being bitterly persecuted by the homosexual militants, yet most of the church is sleeping through all this. As Daniel Ott asks concerning one recent infamous case, “Where is the Christian Love for these Christian Bakers under Attack by Lesbians?”

The Sweet Cakes by Melissa bakery closing in Oregon puts on display for the country to see the stark disregard that Christians have for the plight of other Christians in this country and, for that matter, in the world. Aaron and Melissa Klein were forced to close their business after a case of so called discrimination against lesbians, who were determined to have the Christians make their wedding cake.
The resulting public backlash of the case has forced them to close their business, but where is the Christian retroaction? Where are the marches for religious liberties, freedom of speech and freedom of choice? Where are the women’s groups, as this female owned bakery is forced into bankruptcy by anti-women lesbians?
If the Klein’s were Muslims, there would be swift and loud counter protests. However, Christians are notorious for ignoring attacks on their fellow Christians as they sing Amazing Grace in their own megachurches with jumbotrons and lattes. Where are the Christians in Gresham, Oregon, flooding the Klein’s with orders for cakes and confectionaries? How many years of preaching does it take in the countless churches in this land to convince Christians to stand beside and to love their fellow Christians?

It is not just homosexuality of course but all things sexual that are destroying the Christian church in America. Not only are American Christians doing everything their pagan neighbours are doing (easy divorce, shacking up, promiscuity, etc), but they actually are making excuses for all this.

Let me highlight just one example of this. How many “Christians” have read the book or will go see the film? I refer of course to the pornographic and sexually violent Fifty Shades of Grey. I actually read one woman saying this:

Don’t hate me for this but I read the books and liked the story line. The sexual parts meant nothing and I know we’re exaggerated. I’m going to see the movie only because I felt like I got yo know the characters so well, if it gets to be to graphic then I’ll get up and leave. My salvation is not based on if I watch this movie or not.

For more on this film, see here: billmuehlenberg.com/2015/02/10/fifty-shades-of-sleaze/

Of course most of the above can be traced back to this: a complete lack of sound doctrine, proper theology, and solid teaching. Just about every crackpot Christian movement, cult and heresy of recent times has come out of America. Whether the deplorable prosperity gospel or name it and claim it gospel, every shyster and huckster around seems to thrive in the American churches.

The gospel is no longer being preached in far too many churches. Instead we get heaps upon heaps of feel good, therapeutic, self-centred, New Age baloney. Incredibly, the largest churches in the US – and the rest of the West – are peddling these damnable heresies.

“And my people love it this way” as Jeremiah said of the deceived Israelites whoring after the ever-popular false teachers and false prophets. As Sir Weary Dunlop is reported to have said about the situation on Australia, “we have wimps in the pulpit and cowards in the pews.”

The text I just referred to (Jer. 5:31) is worth reciting here: “The prophets prophesy lies, the priests rule by their own authority, and my people love it this way. But what will you do in the end?” And the other words to the church in Laodicea that I mentioned above are worth concluding with:

“Those whom I love I rebuke and discipline. So be earnest and repent” (Rev. 3:19). Without repentance the American church looks to be toast. But the good news is, God always preserves for himself a remnant. So we must pray for the American church.

Pray for a wave of heartfelt repentance resulting in a wave of glorious and powerful Holy Ghost revival. Without it America is lost. The fate of America lies in the fate of the American church.

25 Replies to “The Crisis of the American Church”