I am continually amazed at how so many Christians will simply run with whatever their favourite preacher or megachurch pastor runs with, instead of actually reading what the Word of God has to say on an issue. They will side with the whacky, weird and at times just plain false teachings of others instead of aligning themselves with what the Bible says.

I find this so often from various quarters. One of the more worrying examples of this comes from those gung-ho devotees of the various hyper grace teachers out there. They will defend to the death what their pastor or teacher or fav Christian leader says about this, while obviously clueless as to what the Bible in fact teaches on this.

I have lost count of the number of times I have actually been attacked by professing believers when I make the simple – and fully biblical – point that true saving faith is also an obedient faith. One cannot claim to be a believer in Christ if one fails to obey Christ.

Christ in other words must be both Saviour and Lord. You can’t believe in him to get saved, and then ignore him or disobey him the rest of your Christian walk. It does not work that way. And of course I am not talking about sinless perfectionism here. 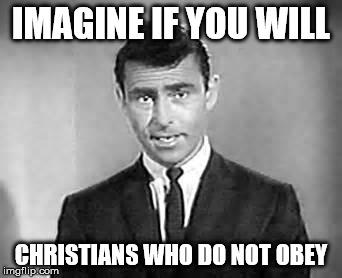 I am not saying our obedience will ever be fully complete and perfect and consistent in this lifetime. But the aim of the true believer is to obey. When he disobeys, he agrees with God that it was wrong, repents, and moves on, seeking to please Him.

We can see this spelled out and worked out rather clearly in one very significant passage of Scripture: John chapter 3. In it we find Nicodemus’ encounter with Jesus (vv. 1-21), and the testimony of John the Baptist about Jesus (vv. 22-36). Sadly, we tend to pick just one verse out of this entire passage, but overlook the remaining verses.

The very well-known verse is of course John 3:16: “For God so loved the world that He gave His only begotten Son, that whoever believes in Him should not perish but have everlasting life.” But we forget about some other hard-core verses, such as v. 18: “He who believes in Him is not condemned; but he who does not believe is condemned already, because he has not believed in the name of the only begotten Son of God.”

Another very important passage is John 3:36: “Whoever believes in the Son has eternal life, but whoever rejects the Son will not see life, for God’s wrath remains on them.” Here I want to focus on just one aspect of this verse, indeed, on just one word.

Notice how the NIV here renders the verb as ‘rejects’ the Son. It is interesting to see how different translations deal with this verb. We are mostly used to translations which speak of not believing in the Son. That is acceptable, although there is a good case to be made for translating it as ‘not obeying’ or something similar.

When I discussed this issue of obedience elsewhere recently someone sought to mildly correct me by saying it was ‘believe’ not ‘obey’ in this verse. I replied by saying that he needed to pull out his Greek New Testament – if he had one – and look at the actual verb being used.

I also said that one can see that the various translations are right to say ‘disobey’ and they are also right to say ‘receive not’, or ‘not subject to the Son’ or similar things. The phrase is used only once here in John. But the term fits well John’s concern: belief involves obedience, whereas unbelief expresses itself in disobedience.

Let me offer a few of the various translations and how they render this word:

‘Not subject’
-Darby Bible Translation – He that believes on the Son has life eternal, and he that is not subject to the Son shall not see life, but the wrath of God abides upon him.

So the idea of disobedience being synonymous with belief here is quite correct – both textually and theologically. To believe is to obey. To refuse to believe is to refuse to obey. D. A. Carson says that verse 36 “is a fitting climax to the entire chapter” as it lays out “the only two alternatives, genuine faith and defiant disobedience”. I like what J. Ramsey Michaels has to say about the verse:

The echo of 3:16 continues, as John puts before his disciples the same stark alternative Jesus had offered Nicodemus and his companions. . . . Verse 36 echoes verse 18, except that the common Johannine expression “whoever does not believe” (v. 18b), gives way to “whoever disobeys the Son” (v. 36b), a phrase found nowhere else in John’s gospel. While the contrast with “whoever believes in the Son” (v. 36a) makes clear that the meaning is the same, the change of verb helps define “believing” as obedience, or “coming to the Light” (compare vv. 20-21), rather than mere intellectual assent.

Leon Morris speaks to this verse as follows:

In typical Johannine fashion the positive is followed by the negative. We might have expected “he that not believeth not,” and indeed, some hold that the verb John uses should be translated that way. It seems that “obeyeth not” is the meaning, but this is not so markedly different. For those who believe do in fact obey the Son, and those who do not believe do not in fact obey Him. The verb is a present participle indicating a continuing attitude. This verse is important in view of the idea held by some that John’s concept of faith is an intellectual one, the assent to certain truths. This verse shows that for him faith and conduct are closely linked. Faith necessarily issues in action.

Yes, the whole of the New Testament teems with this message: true faith is an active, obedient faith. If one believes, one obeys. Dietrich Bonhoeffer had it right when he said, “Only he who believes is obedient,.. only he who is obedient believes.”

Plenty of others could be cited here on this. So let me conclude with a few other gems on this vital topic:

“Obedience is the only reality. It is faith visible, faith acting, and faith manifest. It is the test of real discipleship among the Lord’s people.” J.C. Ryle

“Understanding is the reward of obedience. Obedience is the key to every door.” George MacDonald

6 Replies to “Believing and Obeying”