Who, Christians? Deliberately disobeying Jesus? Yep, sadly happens all the time. We have clear commands from Jesus which we routinely ignore or disregard, and we think we are somehow still being good disciples of his. Let me focus on just one area of deliberate disobedience.

Did Jesus command us to love God with our minds? Did Jesus talk about the need to be wise as serpents? Did Jesus say that often the children of this world are wiser than the children of light? The answer to all three questions is yes. Back in 1982 R.C. Sproul argued that we “live in the most anti-intellectual period in the history of Western Civilization.” 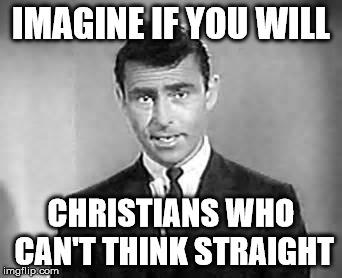 It is as if so many believers actually exalt in ignorance, in stupidity, in cluelessness. They seem to relish offering worldly wisdom instead of biblical wisdom. They seem to be saturated with the precepts and beliefs of secular humanism instead of the biblical worldview.

There is never a shortage of examples of this sadly. Some examples have just appeared on some other social media sites, and they grieve me greatly to be honest. That people can claim to be Christians and actually makes such mindless statements shows what a miserable condition the church is in today.

The first ones have to do with the total ignorance and cluelessness most Christians have concerning the nature of Islam. On another thread in which I was trying to point out the complete difference between Islam and Christianity, especially on the issue of sanctioned violence, I got one guy saying this:

There are so many problems here, including an ignorant moral equivalence which I have dealt with so often elsewhere. And even his example is out to lunch. As I replied: “Thanks for making my case for me – holding up the mystical reformist Sufis as somehow representing Islam (hint: they are regarded as heretics by mainstream Islamic jurisprudence) demonstrates how utterly clueless some folks are here.”

But it got worse, much worse. Another person claiming to be a Christian came back with this zinger: “If IS represents Islam then the Klux Klan represents Christianity”. That was so utterly foolish in the extreme that I did not even bother to reply to this guy, as per Proverbs 26:4.

But as I have written so often, the Islamic State is in fact the perfect example of true Islam at work. There is nothing whatsoever Christian about the KKK however. That atheists and secular humanists make these sorts of idiotic remarks I can understand. That so-called Christians will do so is appalling in the extreme.

Then I had a gal replying to my article on the Christian grandmother and florist who did not want to make a homosexual wedding cake as part of her small business. The rather clueless Christian said this: “One question why did she turn them away. Christ said come to me all who are burdened…perfect opportunity to witness.”

I replied: “Read the articles! She had been serving them for years and never turned them away – she simply and rightly said she could not be involved in homosexual ‘marriage’. She is exactly right, and is to be praised for standing for God’s truth even though she might lose everything. She puts to shame so many clueless and cowardly ‘Christians’. Thus she certainly did offer a perfect witnessing opportunity.”

Another example of the sheer inability – or unwillingness – of some Christians to actually think straight came up in a discussion on the death penalty. Mind you, on this one, I have probably encountered more unbiblical thinking, more illogic, more confusion, and more tortured reasoning and moral mushiness than on most other topics. One guy did not like capital punishment, and offered this as the reason why Christians must oppose it:

No, “May God’s will be done on earth AS it is done in Heaven” ( they do not have Capitol punishment in Heaven…they DONT NEED IT!… Neither do they have “an eye for an eye ” etc. Going on up there…I don’t think so…)
Gods will should be done on earth as God has laid out for us in His Word…but His Word also allows for Grace…) but being sentenced to die for a crime that caused others to die, is not unfair nor un”Gracious”, when one TRULY KNOWS the Giver of Forgiveness, Atonement, and The Giver Of Eternal Life!

Wow. Never mind that it is God himself who ordained the death penalty. But I discuss that all in detail elsewhere. I replied this way: “But they don’t marry in heaven, go to school in heaven, brush teeth in heaven or send out missionaries in heaven – does that mean these are also bad things and not God’s will here on earth? There are many things on this earth which God has ordained and commanded because we live in a fallen world which of course will not be needed in heaven.”

As a final example, I have had more than one Christian contacting me, quite concerned about being forced to go to a mosque as part of some Christian course or class they are taking. As one of them just wrote me, “tonight we are scheduled to visit a local mosque. Organizers wanted to make sure we do not ‘offend’ the Muslims so asked that nobody wear any Christian clothing or jewelry, and that women have their heads covered.”

I assured these folks that their concerns are very well placed, and that it is indeed staggering that Christian groups would be doing this. I told them that they should share their concerns with the leaders, and ask them why are they going to the mosque in the first place?

I went on to say that if it was being done to help them better understand Islam so that they might more effectively win Muslims for Jesus that is one thing, but if this is simply part of a dumb interfaith exercise then they should avoid this like the plague.

This handful of examples is regrettably just a tiny portion of what I encounter on a regular basis, and is fully representative of a church which is so dumbed down, so theologically myopic, and so biblically illiterate that one fears greatly for the future of the Western church.

‘Let my people think’ is the cry of the hour. We need more than ever Christians who will actually think and love God with their whole being, including their minds. We do God no favours whatsoever when we celebrate our stupidity and make a virtue out of our ignorance.

The good news is there are always those who love God with all their minds, and have served the Kingdom so well as a result. We think of recent great Christian thinkers and apologists such as C. S. Lewis and Francis Schaeffer. Or consider those of today, such as Ravi Zacharias, William Lane Craig, John Lennox or R. C. Sproul, to name but a few.

Although my remarks here are not limited or confined to apologetics, these four quotes are most appropriate as I conclude:

“God is no fonder of intellectual slackers than of any other slackers. If you are thinking of being a Christian, I warn you: you are embarking on something that is going to take the whole of you, brains and all. But fortunately, it works the other way round. Anyone who is honestly trying to be a Christian will soon find his intelligence being sharpened: one of the reasons why it needs no special education to be a Christian is that Christianity is an education itself. That is why an uneducated believer like Bunyan was able to write a book [The Pilgrim’s Progress] that has astonished the whole world.” C.S. Lewis

“If all the world were Christian it might not matter if all the world were uneducated. But, as it is, a cultural life will exist outside the Church whether it exists inside or not. To be ignorant and simple now – not to be able to meet the enemies on their own ground – would be to throw down our weapons, and to betray our uneducated brethren who have, under God, no defence but us against the intellectual attacks of the heathen. Good philosophy must exist, if for no other reason, because bad philosophy needs to be answered.” C. S. Lewis

“It’s not just Christian scholars and pastors who need to be intellectually engaged with the issues. Christian laymen, too, need to be intellectually engaged. Our churches are filled with Christians who are idling in intellectual neutral. As Christians, their minds are going to waste. One result of this is an immature, superficial faith. People who simply ride the roller coaster of emotional experience are cheating themselves out of a deeper and richer Christian faith by neglecting the intellectual side of that faith. They know little of the riches of deep understanding of Christian truth, of the confidence inspired by the discovery that one’s faith is logical and fits the facts of experience, of the stability brought to one’s life by the conviction that one’s faith is objectively true.” William Lane Craig

“Knowledge is indispensable to Christian life and service. If we do not use the mind that God has given us, we condemn ourselves to spiritual superficiality and cut ourselves off from many of the riches of God’s grace.” John Stott