Up until recently all of Western civilisation recognised and affirmed the reality of universals and absolutes. But for various reasons much of that has been replaced more recently by relativism and subjectivism. Instead of reality consisting of unchanging and objective truths and values, we now claim that such things no longer exist. 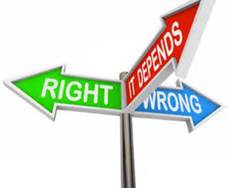 Let me offer just one obvious example of such relativistic thought. Australian thinker Hugh Mackay wrote a book on ethics in 2004 called Right & Wrong. In it he wrote: “When it comes to the moral questions … we must each decide for ourselves. . . . Over and over again, we must ask ourselves Is this right? And then, in a spirit of compassion and sensitivity to the well-being of everyone involved in the issue, we must listen carefully to our own answer.”

So morality simply boils down to one’s personal opinion and subjective feelings. As will be seen in a moment, this is really not at all helpful, and in fact causes a host of problems. But it will be noticed that in all these forms of relativism there is the denial of absolutes.

Those are the three characteristics that distinguish an absolute. It is not relative to time, so it doesn’t change. And it’s not relative to place or nation or class or culture or race or gender or any group – it’s universal. Third, it’s not relative to opinion or thought or belief or desire or feeling or any subjective consciousness. It’s objectively real, objectively true, whether I or you or anyone else knows it, or believes it, or likes it, or cares about it, or obeys it.

Much of relativism is deeply flawed, crippled by inconsistencies and contradictions. Indeed, it is often self-refuting. This is easy enough to illustrate. If someone insists that there is no such thing as absolute truth, one simply has to ask: Do you think that is an absolutely true statement?

Let me look a bit more closely at moral relativism. The idea that we cannot judge another person’s moral position is held by many. The idea that right and wrong are ultimately a matter of subjective opinion is now the dominant belief in the West.

But we have plenty of problems with moral relativism. As with all forms of relativism, it is really a type of scepticism. But it is always going to be self-refuting. As Peter Kreeft says in Summa Philosophica, “The sceptic is not sceptical enough, for he is not really sceptical of his scepticism.”

Also, such a view makes impossible any sort of moral progress. If there are no transcendent objective standards by which we can assess morality, then we will never know if we are making moral progress or regress. As C.S. Lewis, put it in Mere Christianity:

“Progress means not just changing, but changing for the better. If no set of moral ideas were truer or better than any other, there would be no sense in preferring civilised morality to savage morality, or Christian morality to Nazi morality.”

Indeed, if morality is simply about our own personal preferences, then why should we pay any attention to the mere opinions of others? The “ought” of ethics is lost if it is all just a matter of taste and subjective feeling. As philosopher Peter Williams put it,

And moral relativism makes any kind of justice impossible. All law systems and judicial systems are based on the premise that certain things are right and wrong. But if these turn out to be mere personal preferences or cultural biases, then we can have no real system of justice.

As Francis Beckwith and Gregory Koukl say in their book Relativism: “If relativism is true, then there is no such thing as justice or fairness. Both concepts depend on an objective standard of what is right. If the notions of justice and fairness make sense, however, then relativism is defeated.”

The truth is, we all make moral judgments all the time. We all assume that there are some standards external to us which we all can appeal to. When someone cuts into your lane on the highway, you get angry, blow your horn, and maybe raise a finger in protest. Why? Because you not only know this action is wrong, but you assume that the guy who did it also knows that it is wrong.

That is, you are appealing to a higher authority. You are not saying, “I personally do not prefer that you behave like this – just as I personally prefer white chocolates rather than dark chocolates.” No, you are saying quite clearly, “It is wrong to cut into another person’s lane – everyone knows this.” As Norman Geisler puts it in his encyclopaedia on apologetics:

Moral disagreements demand objective standards. Real moral disagreements are not possible without an absolute moral standard by which both sides can be measured. Otherwise both sides of every moral dispute are right. But opposites cannot both be right. For example, “Hitler was an evil man” vs. “Hitler was not an evil man” cannot both be true in the same sense.

While much more can be said on this, it should be becoming clear that relativists and sceptics are on very slippery ground. The basic thing they seek to affirm must also be rejected by their own system. As always, G. K. Chesterton cuts to the chase. As he put it in Orthodoxy:

All denunciation implies a moral doctrine of some kind; and the modern revolutionist doubts not only the institution he denounces, but the doctrine by which he denounces it. . . . In short, the modern revolutionist, being an infinite sceptic, is always engaged in undermining his own mines. In his book on politics he attacks men for trampling on morality; in his book on ethics he attacks morality for trampling on men. Therefore the modern man in revolt has become practically useless for all purposes of revolt. By rebelling against everything he has lost his right to rebel against anything.

Or as he puts it elsewhere: “The real sceptic never thinks he is wrong; for the real sceptic does not think that there is any wrong. He sinks through floor after floor of a bottomless universe.”

14 Replies to “On Relativism”