There is no shortage of examples of how the church in America is doing a great job of subverting the faith from within. Forget about all the external enemies and threats to biblical Christianity when so many folks within the church seem to be single-handedly smashing it down.

I just encountered two more shocking examples of this today. No wonder the church is in such a mess when those who claim to be Christians are scoring own goals. For those not familiar with that term, ‘an own goal is when a player scores a goal against their own – not the opposing – team.’

In biblical thought, we are either scoring goals for Jesus or we are scoring goals for Satan. These two examples show us just who is getting all the goals here. They are shockers, but are sadly representative of far too much capitulation, cluelessness, carnality, compromise and cowardice in American Christian circles. 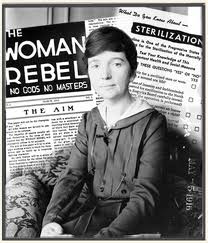 My first example is almost too unbelievable to mention. But let me mention it anyway. In the leading evangelical magazine in America, a writer has actually sung the praises of eugenicist and racist Margaret Sanger. Yes you heard me right.

As you can see in the link below, this “Christian” writer just cannot find anything negative to say about Sanger, but instead treats her as some sort of hero. Well, she certainly was not a hero by any stretch of the imagination, and I am utterly gobsmacked that Christianity Today would stoop to print this puff piece on this really evil woman.

I have written about Sanger often, so no need for me to reinvent the wheel here. Let me simply offer something I wrote about her two decades ago:

A leading proponent of eugenics was Margaret Sanger (1879-1966) the founder of Planned Parenthood, the biggest promoter of sex education, abortion and birth control in the world today. Millions of school children today are exposed to the philosophy and values of Sanger.
In college she plunged into radical politics, suffragette feminism, and unfettered sex. She married into money, became a socialist, and pursued anarchist and utopian causes. She was especially influenced by English sexologist Havelock Ellis and his Studies in the Psychology of Sex. Ellis was a proponent of free love and every kind of sexual deviancy. He was to later become one of her many lovers.
Ellis was also a eugenist, and advocated sterilizing the “unfit”. He said, “Feeble-mindedness is an absolute dead-weight on the race; it is an evil that is unmitigated”. He said those who would not volunteer for sterilization should have their Poor Relief withdrawn from them.
In 1917 she founded the Birth Control League, which changed its name to Planned Parenthood Federation of America in 1942. Today Planned Parenthood is a multi-billion-dollar international conglomerate with programs and activities in 134 nations on every continent.
Sanger also published a paper called The Woman Rebel, with “No Gods! No Masters” emblazoned on the masthead. The first issue denounced marriage as a “degenerate institution,” capitalism as indecent exploitation,” and sexual modesty as “obscene prudery”. In another article she asserted that “rebel women claim the following rights: the right to be lazy, the right to be an unmarried mother, the right to destroy . . . and the right to love”.
Her publication Birth Control Review once featured this slogan: “Birth Control: To Create a Race of Thoroughbreds”. In her 1922 book, The Pivot of Civilization, she called for the elimination of “human weeds,” for the cessation of charity, for the segregation of “morons, misfits and the maladjusted” and the sterilization of “genetically inferior races”.
In March of 1925, at an international birth control gathering held in New York, Ms Sanger warned of the menace posed by the “black” and “yellow” peril. Elsewhere she spoke of her plan for sterilizing the “unfit” and criticized those “whose religious scruples prevent their exercising control over their numbers.”
Not surprisingly, she exerted a lot of influence, especially on one person who was probably the greatest applied eugenist who ever lived: Adolf Hitler. In 1929 he said, “if a million children were born in a year and 800,000 of the weakest and most ‘unworthy’ were killed, the end result would be a strengthening of the population.” As his deputy Rudolf Hess explained in 1934, “National Socialism is nothing but applied biology”.

Thankfully I am not the only one outraged by this. Chelsen Vicari, Evangelical Action Director of the Institute on Religion and Democracy said this:

Caution to anyone who believes that Margaret Sanger’s establishment of Planned Parenthood was a righteous attempt to relieve underprivileged women. Sanger was driven by racism and eugenics. With aims for societal hegemony, Sanger started Planned Parenthood to regulate the births of minorities, or what Sanger called ‘benign imbeciles, who encourage the defective and diseased elements of humanity in their reckless and irresponsible swarming and spawning.’ Not exactly the model female leadership Christian women should emulate.
Secular feminists are increasingly sounding the alarm on hormonal contraception today, and Christians ought to be the most pro-women voices, proclaiming the truth about real health and abortifacient risks of hormonal contraception. But this article is a sad and shocking example of a Christian voice rewriting the past and promoting the use of toxic chemicals by the poorest and most vulnerable women in the name of charity.

BTW, the push by some to get Sanger onto the American $20 bill is an equally idiotic idea: http://www.lifenews.com/2015/03/09/dont-put-abortion-activist-margaret-sanger-or-pro-abortion-feminists-on-the-20-bill/

My second example concerns an American Baptist College proudly bringing in lesbians and others to talk about how great homosexual marriage is. Yep, makes perfect sense. Not everyone is thrilled with the idea however:

In response to a controversial choice by American Baptist College (ABC) leadership to invite three active proponents of same-sex marriage to speak and lead worship at the College’s distinguished annual Garnett-Nabrit Lecture Series and preach at the worship services, a group of pastors within the National Baptist Convention (NBC) have informally convened to express their concerns at a press conference to be held at the Renaissance Hotel on Tuesday, March 17 from 10 a.m. to 11:30 a.m. CDT.
The three presenters to which the group objects are United Church of Christ Bishop Yvette Flunder, who is legally married to a woman and who has advocated for her position publicly; Pastor Delman Coates, who successfully led the campaign to win the popular vote for same-sex marriage in Maryland; and Alan Bosaek, who attempted to persuade the South African Dutch Reformed Church to affirm same-sex marriage.
Known as the National Baptist Fellowship of Concerned Pastors, the pastors want to hold accountable the president and board of trustees of ABC, which is owned and operated by the orthodox, Bible-believing denomination which holds to a biblical view of marriage, for their misguided decision to invite the chosen speakers to helm the lecture series, “Ministry in Motion: Living Faith, Doing Justice.”
The pastors have attempted to reach out to ABC President Forrest Harris in hopes of starting a constructive conversation around this issue, but he has not responded to their phone calls or emails. Speaking for the group, Pastor W. Dwight McKissic of Cornerstone Baptist Church in Arlington, Texas, is troubled by ABC’s implicit application of the word “justice” to the positioning of same-sex marriage within the context of Christian orthodoxy.
“The board and administration of ABC have adopted our vocabulary, but not our dictionary,” McKissic said. “This is a moral issue, rather than one of social justice; our concern about Bishop Flunder preaching at the worship service is not about intellectual or educational inquiry, but indoctrination of a worldview placed on the pedestal of theological authority.

As I mentioned, these are just two examples – we could easily find 200 such recent examples of the American church losing its way big time. If there was ever the need for Christians in America to get on their faces before Almighty God and cry out for forgiveness and mercy, it is now.

12 Replies to “The Downward Plunge of American Christianity”