God is the author of culture, so it matters – end of story. But since folks expect a bit more from my articles, let me elaborate. I have been thinking the past few days about the many achievements of human culture, and how they all must come to an end at some point.

For example we have the demonic IS forces right now smashing great works of art and architecture from antiquity in the Middle East. (Of course groups like the UN seem more concerned about this than the slaughter of masses of Christians.) One also thinks of all the great works of art, architecture and so on which were destroyed in the various world wars. 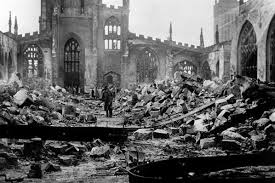 Whether deliberately destroyed, or simply succumbing to the wear and tear of time, so many wonderful things are no longer with us, or will one day be no more. I don’t know about you, but I think about these things, and I worry about them.

Perhaps part of this is a deep sense of the tragedy of wasting. I must have inherited this from my parents who went through the Great Depression, and learned of the importance of saving everything and wasting nothing. I am still that way: if I can save a slightly used serviette (napkin) for another meal, I will! (But no, I don’t send used teabags to overseas missionaries!)

But I often reflect on the great works of culture. There are plenty that come to mind, whether Michelangelo’s David, or Handel’s Messiah, or Chartres Cathedral, or a novel by Dostoyevsky, or the cityscape of Venice, or the Leaning Tower of Pisa, or the Taj Mahal, or the Mona Lisa, or the works of Shakespeare, or the Coliseum.

Whether great works of art, or architecture, or poetry, or music, or literature, there are so many incredibly wonderful human creations which can and do reflect on the beauty and creativity of God himself. Tolkien said we are sub-creators, and we can reflect in so many ways the glorious work of our heavenly creator.

In many respects we can say these mirror, at least on a lesser scale, the great creative works of God, whether the Grand Canyon or Swiss Alps or Victoria Falls or the Great Barrier Reef or a majestic sunset. God makes beautiful things, and he has given us the ability to do so as well.

Yet one day all this will be gone. Some of it is already gone, such as the Hanging Gardens of Babylon, or the Lighthouse of Alexandria. But one day this world will come to an end, along with all human creations. So was it all a waste? Has it all been in vain? Is culture of no importance?

I think not, and for at least two main reasons. One, God is the originator and instigator of culture. He gave us a cultural mandate (Genesis 1:27-28). As you know, in the biblical storyline, God began with a garden and ends with a city. God always intended that we should create culture, for his glory.

Creating places where we can live, work, and flourish are part of the original cultural mandate. We are to subdue the earth and create a civilisation wherein we can live in peace and harmony, and bring glory to our Creator. Of course the Fall has radically impacted on all this, but the cultural mandate has not been abolished.

Two, we likely need not worry about all the great losses of culture in this world. If fallen, finite, and sinful man can now turn out the Sistine Chapel or the works of Dickens, just think of what he will be able to generate in the next life. Contrary to the misconceptions of many, heaven will not be static, dull, and boring.

Culture then is a God-given gift, meant to be appreciated and enjoyed by us all. Sure, in a fallen world all human culture has been corrupted. Thus the Germanic peoples for example can produce both a Beethoven and a Hitler. Because we are made in God’s image, we can see real beauty, real wonder, and real creativity in human endeavours.

But of course because of the entrance of sin into the world, our whole orientation has been turned away from God and toward self. The image of God has not disappeared in fallen man, but it is greatly tarnished, much like a greatly tarnished mirror does a lousy job of reflecting images. Thus great evil is possible as well.

Christians of all people should be lovers of culture. Christians are not Gnostics. The Gnostics taught that the spirit is good, but the material world is bad. They believed that we should not waste time on anything in this world, and only concentrate on the next.

But we are not Gnostics. We believe that the material world is good, for at least three reasons: God created it; Christ became part of this material world; and one day we will all get a new physical body. So the physical matters, as does human culture. As I just read elsewhere today:

Agreeing with the Gnostics that the physical world is destined for the cosmic rubbish heap, many evangelicals have assumed that the only work which lasts forever is the work of saving souls. Raising families, building cathedrals, reading novels and trimming hedges are only of temporal importance. This is often motivated by an unconscious dualism between creation and redemption, as if God’s purposes for the latter had nothing to do with His original intentions in the former.

Quite right. The Bible makes it clear that we are to reject Gnosticism and unhelpful dualism, which pits body against soul. God has created both. We are not so much bodies with souls, but souls living in bodies. But God has created both, and we will have both for all eternity.

So if there are any folks out there like me who often think about and care about all the waste in the world, including so many great works of human culture, then take heart. God created culture, and some form of culture will likely be our lot for all of eternity.

17 Replies to “Why Culture Matters”