Israeli Prime Minister Benjamin Netanyahu was re-elected in spectacular fashion, and as usual the left is going ballistic. Pitted against Obama and the secular left media around the world, it looked like he was a goner. But he confounded his critics and won handsomely. 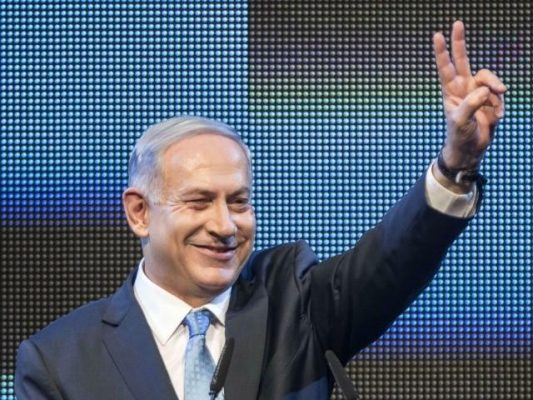 One is not sure which is greater to behold: his victory, or the weeping and gnashing of teeth of the lefties. And throughout this campaign, including his appearance before the US Congress, the contrast between the strong, decisive and principled Netanyahu and the weak, vacillating and petty Obama could not have been greater.

Obama did not even try to hide his contempt of Netanyahu and his desire to do all he could to ensure that he lost the election. But despite his attempts, and that of the leftist MSM, Netanyahu has decisively held on to power. And being the juvenile bully that he is, Obama has still not called to congratulate Netanyahu.

But his win is exactly what not only Israel needed, and the Middle East, but the entire world. As the sole democracy which allows genuine freedoms and pluralism, Israel stands alone in the Middle East against a host of Islamic nations which have vowed to drive it into the sea and turn the entire area into a Muslim hellhole.

Plenty of commentary has already been written about this win, so let me bring some of this into play here. Let me begin with T. C. Williamson:

In the couple of weeks since Netanyahu’s address before a joint session of Congress, much has been bandied about in the press about Netanyahu having ruined his chances of reelection; he defied Washington and there would be a price to pay, he had alienated Israeli citizens who feared he had ruined relations with the United States… in other words, Netanyahu had doomed his own political future by not acquiescing to the president concerning Obama’s push for a nuclear deal with Iran.
It seems just the opposite is true – Israelis demonstrated at the polls yesterday that Netanyahu is the one to lead Israel. As Paula R. Stern wrote in a Times of Israel article,
“By far, the loudest sound heard from Israel this morning is the sound of Israel spitting in Obama’s face and if that seems too crude, too graphic a message I’ll remind you that this is what Obama has been doing to Israel for weeks as he mobilized dozens of campaign workers to fight Netanyahu for the will of the Israeli people. We answered. Good Lord, did we answer and for that alone, I am very proud this morning.”
Not being Israeli, perhaps I can’t know exactly how Paula and many other Israelis feel, but I know I’m personally elated at the election results. In the absence of any real leadership in the United States or Europe, Prime Minister Netanyahu has become the de facto leader of the free world, and he has stepped into the role with aplomb.
Congratulations to Bibi, the Likud Party, and to all of Israel for standing strong.

Rush Limbaugh reminds us that this was as much a defeat of Obama as it was a win for Bibi:

There’s no question Netanyahu is a conservative, particularly if you use the American definition of the ideology, there’s no question. And look at the array of forces against Netanyahu led by Obama campaign experts. And he still wins. He had the socialist movements of Western Europe opposed to him. He had the American media opposed to him. He had most of the world media opposed. They had him dead and buried, politically. They had the Iranian media, of course, opposed.
Barack Obama’s campaign experts raising money for, spending money for, advising Netanyahu’s opponents. And they still lost. And I was thinking last night, remember shortly after Obama was inaugurated, one of the first things that happened – you’ll remember this, Snerdley – one of the first things that happened is that Obama and Moochelle and their delegation from Chicago flew in to wherever, wherever the Olympic committee is, and made their bid for whatever future Olympics.
They went in there thinking it will be a slam dunk, why, the guy just won the Nobel Peace Prize, why, let’s get the Olympics for Chicago. They strut in there and they were shut out, they were shut down, and it was humiliating. They were seen slinking out of town, wherever the Olympic committee decisions are made. Everybody scratched their head, how can this be? Barack Obama, he’s from Chicago, he wanted the Olympics, just won the Nobel Peace Prize, he’s the first African-American president elected in America, and he got shut out.
It can happen, is the point. Conservatism can beat Barack Obama. Conservatism can beat the Democrat Party. I’ll tell you who needs to realize this is the Republican Party. What we have learned is centrism will not beat Barack Obama. RINOs will not beat Barack Obama. Moderates will not beat Barack Obama. Republican Northeastern liberals, Rockefeller types, are not gonna beat Barack Obama. By Obama, I mean the Democrat Party, or Hillary Clinton, throw your name in there. But a conservative candidate will, Scott Walker, Netanyahu, any number of other examples are readily available.

Thomas Sowell reminds us that in times of great danger, leaders are needed, not appeasers and apologists for evil. In this regard Netanyahu is another Churchill:

When Israeli prime minister Benjamin Netanyahu addressed a joint session of Congress on March 3rd, it was the third time he had done so. The only other person to address a joint session of Congress three times was the legendary British prime minister Winston Churchill.
The parallels between the two leaders do not end there. Both warned the world of mortal dangers that others ignored, in hopes that those dangers would go away. In the years leading up to World War II, Churchill tried to warn the British, and the democratic nations in general, of what a monstrous threat Hitler was.

Mr. Prime Minister, we thank God for putting you in a position of leadership (once again) during this very critical time for Israel, and indeed the world. Israel’s fight is our fight! This is not a political issue; this is a Bible issue. May God grant you supernatural wisdom in the challenging days ahead. You are in our prayers today and always. May God arise and may his enemies be scattered!

Can Israel survive in the midst of such enormous pressure? The answer is absolutely yes, but not because of Israel’s might or wisdom or ingenuity. No, Israel will survive because God has ordained it, and what He has ordained, no one can reverse.
As the prophet Jeremiah declared more than 2,500 years ago (speaking of his era as well as the end of the age), “Hear the word of the LORD, O nations, and declare it in the coastlands far away; say, ‘He who scattered Israel will gather him, and will keep him as a shepherd keeps his flock.’ For the LORD has ransomed Jacob and has redeemed him from hands too strong for him” (Jeremiah 31:10-11, ESV).
Later in this same chapter (31:35-37), God said through the prophet that he would ultimately preserve Israel as a people no matter what Israel did, adding that this promise would stand as long as the sun and moon continued to shine.
And that’s why I am so confident. Am I grateful for America’s support of Israel? Absolutely. Do I believe it’s important to pray for Israel? Certainly. Am I appreciative of Israel’s military prowess? For sure.
But my hope for the nation is not found in Israel’s goodness (far from it), nor is it found in Christian support for Israel, American solidarity with Israel, or any other factor. My hope for Israel is in the Lord, and Israel will survive because God has said so. The dissenters can take it up with him.

Netanyahu of course has often been a lone voice warning of the dangers of Islamic imperialism. Obama on the other hand is one of the greatest appeasers of Islam today. We need strong leadership which recognises the reality of the dangers we face. As Williamson rightly said, Netanyahu is now the leader of the free world. More power to him.

8 Replies to “On the Netanyahu Win”