When we think of the Great Awakening of the 18th century, the name George Whitefield must always be associated with this. Along with John and Charles Wesley, no one else was so much a part of this remarkable revival as the great evangelist and preacher Whitefield.

He was born in Gloucester, England in 1714, and at the age of seventeen he attended Pembroke College at Oxford. There he met John and Charles Wesley, and he became involved in the ‘Holy Club’ at Christ College. Whitefield became a Christian while at Oxford University in 1735.

John Wesley had suggested that he read The Life of God Within the Soul of Man by Henry Scougal. The volume discussed “falsely placed religion” as opposed to true religion which was about the “union of the soul with God, and Christ formed within”. 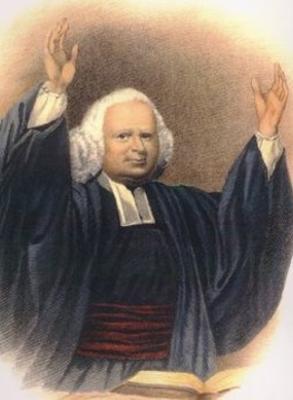 Said Whitefield when he read that, “God showed me that I must be born again” and, “a ray of Divine Light … instantly darted upon my soul, and from that moment, but not till then, did I know that I must be a new creature.” He was ordained as a deacon in 1736.

He soon began preaching, and also became critical of the Church of England for neglecting vital Christian doctrines such as justification and sanctification. As a result London churches closed their doors to him, so he took to itinerant preaching, finding huge crowds whenever he mounted a pulpit.

And his work in open air preaching is especially noteworthy. It is really quite amazing to read about the 18th century revivals in England and elsewhere. After the churches closed their doors to the Wesleys and Whitefield, they decided that the ‘world was their parish’, as John put it.

He attracted incredibly large crowds, especially at his outdoor meetings, and managed to preach to them without the aid of any amplification. Whitefield spoke to 30,000 people at Kennington on April 29, 1739, and 20,000 at Moorfields May 27, with a two-hour sermon!

While he had massive crowds in the fields and countryside, he also had those fiercely opposed to him. Often he had dirt, stones, rotten eggs and bits of dead cats and other animals thrown at him. This opposition and persecution would even sometimes be approved of by the resident clergy.

Even when he spoke in churches on weekdays, police had to prevent too many people from forcing their way in to hear him. The most famous British actor at the time, David Garrick once said, “I would give a hundred guineas, if I could say ‘Oh’ like Mr. Whitefield.”

As but one example of his powerful and Holy Ghost-filled preaching, consider his times speaking to rough and tough miners in Bristol in the middle of winter. He wrote this in his journal: “I hastened to Kingswood [Bristol]. There were about 10,000 people to hear me. The trees and hedges were full. All was hush when I began; the sun shone bright and God enabled me to preach for an hour with great power, and so loudly that all, I was told, could hear me. The fire is kindled in this country and I know all the devils in hell shall not be able to quench it.”

Miners coming up from the mines were transfixed by his preaching. Such a strong impact was made that people saw “white gutters made by their tears down their black cheeks.” All this because the Anglican pulpits were closed to him. As the first Bishop of Liverpool J. C. Ryle, wrote, “The Church was too much asleep to understand him, and was vexed at a man who would not keep still and let the devil alone.”

Benjamin Franklin was quite impressed with him when he heard him preach in Philadelphia. He had doubted he could speak to such large crowds, but after doing some calculations he came to see that he could indeed easily speak to up to 30,000 people without amplification.

During some three and a half decades of preaching, he made seven trips to America and twice that many to Scotland. On his first trip to America in 1738 he established an orphan home in Georgia called Bethesda, which he constantly sought to raise money for. All up he preached at least 18,000 times (around 500 sermons a year, or ten per week) to as many as 10 million people.

Theologically he was a staunch Calvinist which put him at odds with John Wesley. This strong disagreement went quite public, although the two remained friends. Eventually the Methodists split between Calvinist and Arminian wings. But Whitefield always had a high regard for Wesley, and Wesley did preach at his funeral.

Even during his last year of life he kept on preaching, insisting that “I would rather wear out than rust out.” He struggled with asthma but kept up a busy preaching ministry. A week before he died while in New England he wrote to a friend in London, discussing his illness.

He told him that “by riding sixty miles, I am better, and hope to preach here tomorrow. I trust my blessed Master will accept of these poor efforts to serve him. O for a warm heart; O to stand fast in the faith.” He died during his seventh visit to America in Newburyport, Massachusetts on September 30, 1770.

Charles Spurgeon once said this of the great preacher: “Often as I have read his life, I am conscious of distinct quickening whenever I turn to it. He lived. Other men seemed to be only half-alive; but Whitefield was all life, fire, wing, force. My own model, if I may have such a thing in due subordination to my Lord, is George Whitefield; but with unequal footsteps must I follow in his glorious track.”

John Newton said of him: “If anyone were to ask me who was the second preacher I ever heard, I should be at a loss to answer; but, in regard to the first, Mr Whitefield exceeded so far every other man of my time, that I should be at none.” Years later Dr. Martyn Lloyd-Jones called Whitefield “the greatest preacher that England has ever produced”.

Let me close with just a few famous quotes from Whitefield:

“God forbid that I should travel with anybody a quarter of an hour without speaking of Christ to them.”

“It is a poor sermon that gives no offense; that neither makes the hearer displeased with himself nor with the preacher.”