Imagine a dangerous and high-risk lifestyle which nearly everyone considered to be socially unacceptable until just recently now becoming the most celebrated, promoted, protected and privileged lifestyle in the West, with anyone daring to disagree with it treated as a criminal. 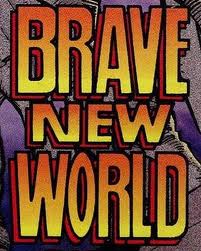 Imagine our sons going overseas to fight and die for freedom, only to find that today freedom is really only reserved for the militant lobby groups and their supporters, while actively taken away from those who refuse to go along with them.

Imagine censorship of anything which goes against the reigning political correctness. Imagine media outlets refusing to carry pro-children and pro-family advertisements. Imagine those concerned about the state of our society and the wellbeing of our children being viciously attacked and vilified for their efforts.

Welcome my friends to Australia, March 2015. But this is true of most of the Western world as well. Welcome to our brave new world, where good is called evil, and evil is called good. We are now living through the very times people like Aldous Huxley and George Orwell warned about.

To stand for children today against the militant activists will cost you. You will be attacked on every side. That is where we have come to as a society today. It is every bit as ugly as the novelists wrote about. I have experienced this for years now.

And so has anyone else who dares to differ from the social engineers and their media supporters. I have recently written about a short pro-child ad which was censored by a major television network here in Australia: billmuehlenberg.com/2015/03/08/shock-and-awe-horror-on-the-airwaves/

Well, a second ad was produced by the Australian Marriage Forum and this too has now been censored, this time by the Nine Network. Imagine having an ad which speaks to the safety and wellbeing of children deemed to be too controversial by the media!

This is yet another example of the homosexual militants and their partners in crime in the MSM deliberately censoring out alternative points of views. I thought Australia was a democracy in which freedom of speech was highly valued. It seems not any more.

David van Gend tells the story of the latest case of Big Brother and homosexual intimidation and bullying:

AMF ad pulled without warning by Channel 9
Without any reason given, the new Australian Marriage Forum ad booked for broadcast nationwide on Channel 9 tonight has been pulled. AMF condemns this silencing of their voice on the vital issue of same-sex ‘marriage’.
Only hours after sending a media release announcing the latest ad in their campaign, “Think of the Child”, the President of the Australian Marriage Forum has reported that Channel 9 has pulled the ad, without any notice or explanation.
“I was gobsmacked to get a call from our advertising agent at 6.45 EST, who got a call at 6.29 EST from Channel 9 saying they had pulled the ad from the 6pm news. It was meant to have been shown in Sydney, Melbourne, Adelaide and Hobart by then and other state and territory capitals soon after” Dr van Gend said.
“No explanation has been given. A follow-up email from our advertising agent at 6.45 Brisbane time states:
Further to our conversation earlier, I confirm that I was called by a representative of Ch9 at 5:29 pm Brisbane time to inform me that they will not be proceeding with the 30 second commercial we booked on the nine network that were due to air in their 6pm news service. By the time we received this call, most ads should have already aired.
At this stage, we have not been given a reason as to why they decided not to air our commercial, despite receiving written confirmation that the booking was proceeding as planned. I’ve asked for a written explanation and have not received any written explanation to date.
“In other words, after our media release had gone to hundreds of journalists announcing the broadcast, and an email blast to our 68,000 supporters, and our tweet announcing the ad was on air, we get told it has been pulled”, Dr van Gend said.
This is the ad, which argues that we as a nation have apologised once for violating the bond between mother and child, and should not contemplate another policy – marriage rights for two men – that would again violate the bond between mother and child:
The bond between mother and child was broken, and we have apologised: “The most primal and sacred bond there is – the bond between a mother and her baby.” The primal bond between mother and child would be broken again if we institute marriage without a woman, which creates families without a mother. Who will apologise to the Motherless Generation?”

You can see the banned ad here: australianmarriage.org/urgent-9pm-est-media-release-tv-ad-pulled-by-channel-9/

It seems so much of the dystopian picture of a coming dictatorship envisioned by the novelists is coming to pass right before our very eyes. How incredible is it to think that the powers that be will now do anything and everything to promote, champion, glorify and exalt an unhealthy and unnatural lifestyle, while at the same time attacking, smearing, and censoring those who care about decency, family, children and what is right.

Welcome to the brave new world.

Please support the work of David van Gend and the AMF. Pray for them, share their information, and contribute financially if possible. The AMF website is here: australianmarriage.org/