Anyone who is aware of the Christian scene in the West today realises that there is much amiss with the contemporary church. It seems so far removed from the early church in passion, purity, progress and purpose. One wonders if Jesus or Paul or Peter would have a hard time recognising it if they were to come back today.

I have certainly written many pieces highlighting areas of concern with the church, and will likely continue to do so. We cannot keep our heads in the sand and pretend that everything is just hunky dory with what passes for Christianity nowadays.

Where there are problems, errors, wrong-doings, heresy and so on, these issues must be dealt with. They cannot be swept under the carpet. That has happened too often in the past resulting in too much damage, too many broken lives, and too much dishonouring of our Saviour.

The way we do youth ministry is one example of how we have been letting down the cause. This too I have spoken about previously, and a new study suggests that for all the time and attention being spent on young people – at least in America – there is not much to show for it.

Consider this rather discouraging report:

Religion and faith is having less of an influence on people’s lives, especially the young, according to new research.
The US study claims that millennials – recent teenagers – are the least religious generation of the last six decades and possibly in the nation’s history.
It said recent adolescents are less likely to say that religion is important in their lives and spend less time praying or meditating – and future generations are likely to be even less religious. Researchers led by psychology professor Jean Twenge from San Diego State University analysed data from 11.2 million respondents from four nationally representative surveys of US adolescents aged 13 to 18 taken between 1966 and 2014.
They found that millennials, also known as Generation Y, are less likely to belong to a religious group, or say that faith plays an important role in their daily lives. ‘Unlike previous studies, ours is able to show that millennials’ lower religious involvement is due to cultural change, not to millennials being young and unsettled,’ said Professor Twenge, who is also the author of Generation Me.
‘Millennial adolescents are less religious than Boomers and GenX’ers were at the same age. We also looked at younger ages than the previous studies. More of today’s adolescents are abandoning religion before they reach adulthood, with an increasing number not raised with religion at all.’

I of course know little about this actual study, and other studies might arrive at different conclusions. But if it is even half correct, it is a damning indictment on the state of the church today. So we need to be willing to discuss our faith today – warts and all. 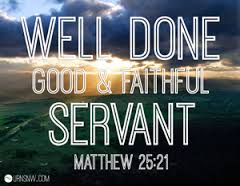 But the real purpose for this article is the obvious corollary to all this. If we must not fail to report our many and various faults, we must also not fail to speak up and give praise where it is due. The truth is, countless Christians, Christian workers, and Christian leaders are doing a terrific job, and they must not be overlooked.

There are so many champions of the faith who are working tirelessly for the Kingdom. Almost all of them are unknown, unrecognised, unheralded and unnoticed by most folks, but they have been faithfully serving Christ in good times and in bad.

As I am travelling through North America at the moment I am reminded of how many faithful troopers are still in the trenches, still fighting the good fight. There are so many who have not given up and who have not abandoned the gospel.

They put in hours beyond measure. They give up free time, make great sacrifices, and often are deprived of sleep and comfort as they go about their God-given tasks. As I say, most of these folks are not in the spotlight, and most will never make it onto the cover of a glossy Christian magazine.

They are simply faithful servants of Christ who love Jesus and love the people they are called to minister to. These are the real heroes who deserve our applause, our respect, and our prayers. They can often be discouraged and disheartened, so we need to lift them up to the Lord.

We must not just pray for them, but actually tell them how much we appreciate them and all the work they are doing. So let me encourage you to do this if it is not a normal routine of yours. Make it a habit to thank and praise these unsung heroes.

They need such encouragement. Sure, their ultimate encouragement is in the Lord, but they also need to get a bit of positive feedback from others. So let’s do it. Until Christ returns, there is much work to do. Many faithful workers are giving their all, and we must salute them, uphold them, and support them.

One day they will hear those wonderful words, “Well done, good and faithful servant”. But it would not hurt them to hear it now and then in this life as well.

8 Replies to “Thanking the Saints”