Everywhere in the West we find the thought police of political correctness out in force, stomping on anyone who dares to go against the party line. Nowhere is this more evident, and nowhere are the jackboots stomping with more ferocity, than in the area of sexuality – especially homosexuality. 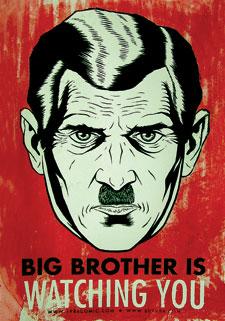 Let me offer a few more brief examples of this (in addition to the hundreds I have already documented in other articles and in my books). The first example comes from Australia. The push is once again on for homosexual marriage there.

(As I have mentioned a few times, I leave the country for a few weeks and all hell breaks out!). And for daring to oppose this, the leader of Australia’s biggest union has been targeted by the thought police – in his own party:

A tribute to long-serving union leader and retiring ACTU senior vice-president Joe de Bruyn was pulled on the final day of the labour movement’s triennial gathering because of outrage over his stance on gay marriage and his union’s approach to industrial agreements.
Based on a draft resolution obtained by The Australian, the ACTU congress would have awarded Mr de Bruyn its -“meritorious service award” in recognition of his long leadership of the conservative Shop Distributive and Allied Employees Association. The backlash against Mr de Bruyn would have been led by the Australasian Meat Industry Employees Union, with Victorian branch secretary Paul Conway being nominated to speak against the resolution.

I happen to know Joe. He is a terrific guy, and he has had me speak various times at his conferences. But for simply declaring that marriage is between a man and a woman, this Labor stalwart is being punished by the gaystapo in his party. How tragic.

The second example comes from California where Governor Moonbeam, as he is known, has again declared war on marriage and family:

California Gov. Jerry Brown signed into law Monday a bill that deletes the terms “husband” and “wife” from the state’s marriage law and replaces it with “spouse” in order to accommodate same-sex marriages. The bill, put forth by Democratic Sen. Mark Leno, takes a provision of the California Constitution that recognizes marriage as being between a man and a woman and replaces it with more gender-neutral language. The legislation takes effect Jan. 1 and reflects the legality of gay marriage in California after a decade of litigation. The law also removes limits on recognizing same-sex marriages performed out of state.

Yep, just obliterate the most important social institution ever, and pretend there are no such things as husbands and wives. Way to go Jerry. But some Christians do not seem to be any better. Over in the UK we have some churches falling for the gender bender agenda:

The Church of England is to debate plans to introduce a ceremony akin to a baptism to mark the new identities of Christians who undergo gender transition. The Rev Chris Newlands, the vicar of Lancaster Priory, has proposed a motion to the General Synod to debate the issue, after he was approached by a young transgender person seeking to be “re-baptised” in his new identity. The motion, which was passed by Blackburn Diocese last month, calls on the House of Bishops to consider whether it should introduce a new service to mark the milestone in the life of a trans person.

Oh dear. But given that I am in Canada now, let me conclude with a look at the situation here. Homosexual marriage was passed in 2005. Things have gone all downhill since then. One Canadian, Dawn Stefanowicz, is well qualified to tell the story of how the granting of special rights for homosexuals takes rights away from others. She begins a recent article as follows:

I am the daughter of a gay father who died of AIDS. I described my experiences in my book: Out From Under: The Impact of Homosexual Parenting. Over fifty adult children who were raised by LGBT parents have communicated with me and share my concerns about same-sex marriage and parenting. Many of us struggle with our own sexuality and sense of gender because of the influences in our household environments growing up.
We have great compassion for people who struggle with their sexuality and gender identity—not animosity. And we love our parents. Yet, when we go public with our stories, we often face ostracism, silencing, and threats.
I want to warn America to expect severe erosion of First Amendment freedoms if the US Supreme Court mandates same-sex marriage. The consequences have played out in Canada for ten years now, and they are truly Orwellian in nature and scope.

Wedding planners, rental halls, bed and breakfast owners, florists, photographers, and bakers have already seen their freedoms eroded, conscience rights ignored, and religious freedoms trampled in Canada. But this is not just about the wedding industry. Anybody who owns a business may not legally permit his or her conscience to inform business practices or decisions if those decisions are not in line with the tribunals’ decisions and the government’s sexual orientation and gender identity non-discrimination laws. In the end, this means that the state basically dictates whether and how citizens may express themselves.
Freedom to assemble and speak freely about man-woman marriage, family, and sexuality is now restricted. Most faith communities have become “politically correct” to avoid fines and loss of charitable status. Canadian media are restricted by the Canadian Radio, Television, and Telecommunications Commission (CRTC), which is similar to the FCC. If the media air anything considered discriminatory, broadcasting licenses can be revoked, and “human rights bodies” can charge fines and restrict future airings.
An example of legally curtailed speech regarding homosexuality in Canada involves the case of Bill Whatcott, who was arrested for hate speech in April 2014 after distributing pamphlets that were critical of homosexuality. Whether or not you agree with what he says, you should be aghast at this state-sanctioned gagging. Books, DVDs, and other materials can also be confiscated at the Canadian border if the materials are deemed “hateful.”
Americans need to prepare for the same sort of surveillance-society in America if the Supreme Court rules to ban marriage as a male-female institution. It means that no matter what you believe, the government will be free to regulate your speech, your writing, your associations, and whether or not you may express your conscience. Americans also need to understand that the endgame for some in the LGBT rights movement involves centralized state power—and the end of First Amendment freedoms.

12 Replies to “Perils of the PC Police”