Deception is all around us, and even sadder, it is running rampant in many of our churches today. And one of the greatest examples of being deceived is when a person claims to be a Christian, yet totally rejects the hundreds of warnings in Scripture about being deceived! 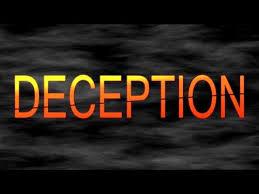 They revel in their rebellion in other words. They have been so deceived by the enemy that the utterly clear and black and white words of Scripture are completely rejected, replaced by the demonic spirit of the age. And these folks exult in this. They take pride in evangelising for secular humanism while throwing out the plain teachings of the Word.

I have just had two very sad and worrying examples of this come my way. The level of blindness, deception, and pride in their anti-biblical nonsense is appalling to behold. They both make the claim to be Christians, while they both have declared the Word of God to be null and void, as they freely imbibe of every bit of worldly wisdom and deception.

Consider this sad bit of demonic deception from someone on another site where I had posted a comment concerning the pro-homosexual apostate Tony Campolo:

Bill Muehlenberg you are the cause of many people especially Gay young people hating Christ because for decades we in Australia had put up with your Gay hating vitriol, yes I know your proud of it..Thank God for people like Tony who lifts up Christ ..and thousand of Gay people are drwn to the Saviour because of the love of Christ shown true Tony to us Gay people in Australia. Perfect love cast out fear Bill, and you are perceived a fearful unloving man by thousand of Gay men and wome..think about it..mate ! I well remeber yout hate lectures at Harvest Bible College..thank God you are not representing God’s love to mankind..we have Tony praise God !

Wow, what can one say? When the living God is so clearly rejected, His Word spat upon, and this much satanic deception is going on, there is little one can do than pray for such a person. So please do. I do not recall who this person is, but I guess I did not teach him very well! He has gone off the deep end into deception, immorality and rebellion against the living God. And he seems to love it this way.

And what a shocker to realise that as I was called by God to faithfully and accurately teach the Word of God at a Bible college, there were students there sitting under my teaching who were in fact seething in hate and bitterness as I did so. That is so very tragic and heartbreaking to learn of.

My second example was a comment to my website and my article on 20 myths about homosexuality. Consider this absolute doozey:

Myths are not debunked by opinion. Not once do you cite non-biased studies or facts where you claim evidence.
I am a heterosexual, married woman with four children. I can tell you unequivocally that I did not marry for the purpose of having children. I can also tell you that homosexual marriages will not hurt the marriage I am in.
Harm to children, by the way, is done by humans with failings, regardless of who they marry. I was the offspring in a heterosexual marriage. I and my brother were sexually abused for years by my father. What a great family structure I had!
Comparisons to pedophiles or bestiality as a slippery slope is ridiculous as consent does not exist in those examples.
There is just so much logic flaw and self-righteousness throughout this article, I can’t even scratch the surface in rebutting it. I’m walking away now, shaking my head at the hypocrisy of how you choose to interpret Christ’s love.

Wow again, another mind-bending and Scripture-destroying comment. After saying some prayers for her, I replied to her as follows:

Thanks ….. But one has to laugh at being accused of things which are in abundant display in your comment! Am I allowed to throw your very words back at you?

“Not once do you cite non-biased studies or facts where you claim evidence.”
“There is just so much logic flaw and self-righteousness throughout this article, I can’t even scratch the surface in rebutting it.”

What was that about the kettle calling the pot black? You obviously have not even bothered to read my article carefully, but have just launched into a knee-jerk emotive reaction, which contributes absolutely zippo to the debate. Had you bothered to actually read it, you will see I mentioned that I have written a number of books on this with over 1500 footnotes, most of them from medical journals, scientific periodicals, the homosexual press, and so on. Anyone who has actually read my material knows just how fully documented and backed up by reputable evidence these books are. And out of curiosity, just how many well-documented books have you written on this topic?

But let me call your bluff further and deal with your specific howlers. The fact that you do not want children no more changes the primary function of marriage than does buying a book without any intention of reading it. A book is still designed to be read, regardless if it actually is or not. And marriage is still primarily about the rearing and raising of the next generation, even though not all couples are able to or want to.

And throwing out unsubstantiated and emotive claims does not an argument make. Simply saying homosexual marriage will not impact on real marriage while ignoring all the evidence helps no one. In my most recent book I offer numerous documented cases of how people are being negatively impacted by all this. But I realise that hiding one’s head in the sand and ignoring the evidence is a preferred way of proceeding for many.

And while we are sorry for your sad situation, extrapolating your own experience onto the rest of the world is not exactly scientific or rational. Just because you were abused does not mean that every heterosexual marriage is evil. That is simply a non-sequitur. And as I carefully document in my books, levels of child abuse are actually much higher in non-traditional households – that is, outside of the heterosexual married family unit.

And of you knew anything about the pro-paedophilia and pro-bestiality lobby groups, you would know that they are claiming these “lifestyle choices” are fully consensual. Sorry, but your ignorance of these matters is not very impressive.

And it is interesting that you end up talking about Christ’s love. Christ over and over emphasised the importance of truth. Without truth there can be no love. And Jesus said repeatedly that if you love him, you will obey his commandments. Telling God he is wrong about human sexuality and claiming the Bible is mistaken on homosexuality has nothing to do with love, but everything to do with sinful rebellion and idolatry.

Sorry, but you have regrettably allowed your unfortunate childhood experiences to determine how you now live and what you now believe. The truth of Scripture has been rejected as you run with your experiences and emotions. All we can do is pray for you in that case. Jesus provides real healing and wholeness if you seek it. But calling him a liar and rejecting his clear commands will not readily result in either I am afraid.

Whether these two individuals are able to respond to biblical truth and get themselves out of the pits of deception and satanic bondage is a moot point. If they really seek God, he is more than able to deliver them. But if they are happy and proud in their deception and rebellion, then things are not looking very good for them.

As I say, we need to pray for such people. These two obviously need a whole lot of prayer. And we all need to be reminded afresh of the horrific nature of satanic deception. Let me conclude with a few such warnings from just the New Testament:

Matthew 24:4-5 Jesus answered: “Watch out that no one deceives you. For many will come in my name, claiming, ‘I am the Messiah,’ and will deceive many.

Romans 16:18 For such persons do not serve our Lord Christ, but their own appetites, and by smooth talk and flattery they deceive the hearts of the naive.

1 Corinthians 6:9 Or do you not know that wrongdoers will not inherit the kingdom of God? Do not be deceived: Neither the sexually immoral nor idolaters nor adulterers nor men who have sex with men…

2 Corinthians 4:4 The god of this age has blinded the minds of unbelievers, so that they cannot see the light of the gospel of the glory of Christ, who is the image of God.

2 Corinthians 11:3 But I am afraid that just as Eve was deceived by the serpent’s cunning, your minds may somehow be led astray from your sincere and pure devotion to Christ.

Ephesians 4:14 So that we may no longer be children, tossed to and fro by the waves and carried about by every wind of doctrine, by human cunning, by craftiness in deceitful schemes.

Ephesians 5:6 Let no one deceive you with empty words, for because of these things the wrath of God comes upon the sons of disobedience.

Colossians 2:4 I tell you this so that no one may deceive you by fine-sounding arguments.

Colossians 2:8 See to it that no one takes you captive by philosophy and empty deceit, according to human tradition, according to the elemental spirits of the world, and not according to Christ.

2 Timothy 3:13 While evil people and impostors will go on from bad to worse, deceiving and being deceived.

Hebrews 3:13 But encourage one another daily, as long as it is called “Today,” so that none of you may be hardened by sin’s deceitfulness.

James 1:16 Don’t be deceived, my dear brothers and sisters.

These and many other passages make it abundantly clear that satanic deception is alive and well and happening all the time. We all would do well to carefully read and reread these passages, and pray that we are not allowing ourselves to be deceived. For clearly many are being deceived – and they seem to relish that deception as well.

20 Replies to “Deception Unbounded and Running Amok in the Churches”