Eight hundred years ago the Great Charter was written, and we still are enjoying the benefits of it today. Simply put, this hugely significant document helped secure genuine democratic reforms, restrictions on government powers, equality and freedom under law, and other vital social goods we often take for granted today.

As Lynda Rose of Voice for Justice in the UK put it:

On 15 June 1215, with England on the brink of civil war, King John met with the barons at Runnymede and put his seal to what was in effect a peace treaty: Magna Carta. Today, that Charter has become one of the most celebrated and influential documents in history, rightly seen as the foundation for Democracy worldwide. Lord Denning described it as “…the foundation of the freedom of the individual against the arbitrary authority of the despot.” 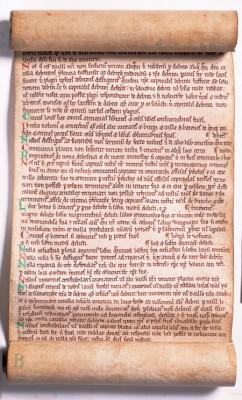 What is not so well known is the overwhelming influence of the Christian church on this vitally important document. Australian law professor Augusto Zimmermann explains the Christian roots:

Common law means a legal system based upon the English legal system; a mixture of customary law, judge-made law and parliamentary law. At least until the early 19th century, the common law was heavily influenced by Christian philosophy. This philosophy argues that there is a divine reason for the existence of fundamental laws, and that such laws are superior to human-made legislation, thus reflecting universal and unchangeable principles by which everyone should live. This assumption was expressed, among other things, in the Magna Carta of 1215, a charter which guaranteed the basic rights and privileges to the English barons against the king. Professor Aroney explains Christianity’s ideological influence upon the Magna Carta:
From [the time of Alfred] the kings of England have traditionally recognised their submission to God. At their coronations they take an oath before the Archbishop acknowledging the Law of God as the standard of justice, and the rights of the church. They are also urged to do justice under God and to govern God’s people fairly. Magna Carta was a development of these themes.

As Zimmermann explains in another important article:

At the time of Magna Carta (1215), a royal judge called Henry de Bracton (d. 1268) wrote a massive treatise on principles of law and justice. Bracton is broadly regarded as ‘the father of the common law’, because his book De legibus et consuetudinibus Anglia is one of the most important works on the constitution of medieval England. For Bracton, the application of law implies ‘a just sanction ordering virtue and prohibiting its opposite’, which means that the state law can never depart from God’s higher laws. As Bracton explains, jurisprudence was ‘the science of the just and unjust’. And he also declared that the state is under God and the law, ‘because the law makes the king. For there is no king where will rules rather then the law.’
The Christian faith provided to the people of England a status libertatis (state of liberty) which rested on the Christian presumption that God’s law always works for the good of society. With their conversion to Christianity, the kings of England would no longer possess an arbitrary power over the life and property of individuals, changing the basic laws of the kingdom at pleasure. Rather, they were told about God’s promise in the book Isaiah, to deal with civil authorities who enact unjust laws (Isaiah 10:1). In fact, the Bible contains many passages condemning the perversion of justice by them (Prov 17:15, 24:23; Exo 23:7; Deut 16:18; Hab 1:4; Isa 60:14; Lam 3:34).

A recent piece in the English press also discusses the Christian role in the production of the Magna Carta:

Stephen Langton, Archbishop of Canterbury, played a central role in drafting the charter, which was signed by King John at Runnymede, Surrey. At least 11 other bishops were present.
A briefing note issued to members of the Synod reads: “The Church in England was central to the development of legal and human rights centuries before the French Revolution, now generally credited (along with the Enlightenment) for the secular genesis of human rights: the first parties to the charter were the bishops – led by Stephen Langton of Canterbury, who was a major drafter and mediator between the king and the barons; and its first and last clauses state that ‘the Church in England shall be free’.
“It is important that the Church’s crucial role in Magna Carta and its rights is not air-brushed out in 2015 – as was the role of Christians in the anti-slave trade celebrations.”

And recent research has even further demonstrated the Christians influence and underpinnings of this document.

New research suggests that Magna Carta may have been published predominantly by the church – rather than the Royal government of the day.
The revelations – announced as Britain prepares to commemorate the 800th anniversary of Magna Carta – shed remarkable new light on the politics behind the issuing of the charter.
The research suggests that early 13th century England’s King John was so reluctant to publicize the now world-famous document that the church had to step in to ensure that sufficient copies were made and distributed.
A new investigation into Magna Carta, carried out by scholars from the universities of East Anglia, Cambridge and King’s College London, has revealed, for the first time, that England’s bishops actually placed their own scribes inside the government’s civil service specifically to make copies of Magna Carta – so that every region of the country could have one.

King’s College London’s Professor of Medieval History, David Carpenter, believes that the new revelations are “exciting discoveries”.
“We now know that three of the four surviving originals of the charter went to cathedrals – Lincoln, Salisbury and Canterbury. Probably cathedrals were the destination for the great majority of the other original charters issued in 1215,” he said.
“This overturns the old view that the charters were sent to the sheriffs in charge of the counties. That would have been fatal since the sheriffs were the very people under attack in the charter. They would have quickly consigned Magna Carta to their castle furnaces.
“The church, therefore, was central to the production, preservation and proclamation of Magna Carta. The cathedrals were like a beacon from which the light of the charter shone round the country, thus beginning the process by which it became central to national life,” said Professor Carpenter.

Last year while in England I had the privilege of seeing one of the four original copies at Salisbury Cathedral. I wrote an article about this at the time, noting the huge discrepancy between the Christian beginnings and development of England and its current anti-Christian stance. As I wrote there:

England is now an incredibly darkened and demonic place, with so much intense hatred of all things Christian. It is very difficult indeed for biblical believers to stand strong at the moment. Nonetheless, I have met many of these champions of the faith, pinpoints of light in a very black place, who are fighting the good fight.
But one after another they are being sued, harassed, bullied, pursued by the police, or taken to task legally by the secular lefties. This is really leading to full-scale persecution of true Christians. I thought things in Australia were bad, but they are even worse in the UK.
So please pray for the remnant of believers who are seeking to stand strong here. They are few and far between, but they are some of the boldest and bravest believers I have found. They know how dire things are, and they are still holding firm.

Magna Carta forever changed the world, and we still are enjoying the fruit of this overwhelmingly Christian document. But the tragedy is, the Western world is quickly renouncing its Christian past. And with it, it is renouncing freedom, democracy and rule of law.