The what!? OK, for those of you not fully up on their biblical terminology, I refer of course to something found in the gospel accounts. In Matthew 3:1-12 we read about John the Baptist, how he is preparing the way for Jesus, and what he says of his work. As we read in verses 11-12:

“I baptize you with water for repentance. But after me comes one who is more powerful than I, whose sandals I am not worthy to carry. He will baptize you with the Holy Spirit and fire. His winnowing fork is in his hand, and he will clear his threshing floor, gathering his wheat into the barn and burning up the chaff with unquenchable fire.”

Here John says that a major work of Jesus will be one of separation and division. He will separate the wheat from the chaff. As we read the biblical account of Jesus we find this happening all the time. There will always be a separation of those who are truly his from those who are not his.

And as I have written so often now, in one sense the push for all things homosexual may be a blessing in disguise. This is doing a terrific job of making a clear separation in our ranks: those who remain true to the word of God and all that it teaches about human sexuality in general and homosexuality in particular versus those who are wilting under the pressure, succumbing to the world and its agenda, and effectively showing us what their true colours are.

So in that sense the homosexual juggernaut crushing everything in its path in the West may be performing a very helpful service here. We are rather quickly and decisively learning who are truly Christ’s and who are not. If we in effect call God a liar on these issues and tell him he and his Word are wrong on this, then that tells us pretty much all we need to know about such folks.

Those persons are tares or goats. They are not wheat or sheep. Something this basic is a great way to separate the men from the boys when it comes to biblical Christianity. So I am sort of grateful that this is now happening. It tells me rather simply and easily who is a real disciple of Christ and who is just a wolf in sheep’s clothing.

Examples of this are occurring every day. And it is not just with individual believers either. There are churches and entire denominations going down the path of pro-sodomy apostasy. Just the other day the Episcopalian Church in America approved of homosexual “marriage”. 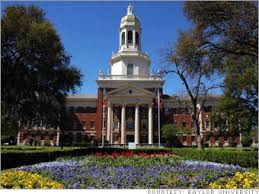 And we also have parachurch groups and other Christian institutions now declaring their hand on these matters. Thus we have Bible colleges and seminaries which used to be strongholds of biblical orthodoxy now utterly collapsing and caving in when it comes to homosexuality.

Consider this very recent and very tragic case. Baylor University in Texas, the largest Baptist college in the world, has now decided that homosexual acts are just peachy. Yep, you heard that right. As one report says:

The world’s largest Baptist university has dropped a ban on “homosexual acts” in its sexual conduct policy.
After years of appeals from students, alumni and others, Baylor University revised its policy, dropping the ban on gay sex to “state more plainly the expectations of the university,” a Baylor spokeswoman said Tuesday.
“These changes were made because we didn’t believe the language reflected Baylor’s caring community,” spokeswoman Lori Fogleman said in an email.
Baylor’s previous policy called “homosexual acts” a misuse of “God’s gift,” along with sexual abuse, sexual harassment, sexual assault, incest and adultery. To some, the policy was a blemish on the school’s reputation, landing it in harsh light in some rankings, like the Princeton Review’s roundup of the most LGBT-unfriendly campuses.

Another write-up about this reports:

The world’s largest Baptist university, Baylor, has dropped language in its sexual misconduct policy that punished those who engaged in homosexual acts, a change the socially conservative school said better reflects its values as “a caring community.”
Baylor, in the central Texas city of Waco, had been one of a handful of religious U.S. colleges and universities that allowed for the dismissal of students, and sometimes staff, for homosexuality.
Baylor has removed “homosexual acts” as a punishable offense in its sexual misconduct policy, an official said on Tuesday. The policy also mandated disciplinary action for sexual assault, incest, adultery and fornication.
“These changes were made because we didn’t believe the language reflected the university’s caring community,” Baylor spokeswoman Lori Fogleman wrote in an email.
Dozens of colleges have provisions that are seen as discriminatory against the lesbian, gay, bisexual and transgender (LGBT) community, ranging from housing bias to blocking the formation of LGBT student groups, gay rights advocates said.
The new policy endorsed by the university’s board in May states, “Baylor will be guided by the biblical understanding that human sexuality is a gift from God and that physical sexual intimacy is to be expressed in the context of marital fidelity.”
The university, which has about 14,000 undergraduates, did not say if it would allow married same-sex couples among its ranks after the U.S. Supreme Court last month ruled that gay marriage is legal in all 50 states.

Um, “a caring community”? Caring about what exactly? About God’s word? About biblical truth? About pleasing God rather than man? About standing strong for Christian morality? Here we find another big-time sell out to the activist agenda, again in the bogus name of care and compassion.

Sorry, but there is nothing at all compassionate about lying to a homosexual and letting him believe that what he is doing is just neat, and fully approved of by God. It is not caring to allow unrepentant sinners to continue on their journey to hell. It is not caring to side with homosexual militants against the living, holy God.

And of course while we are at it with this trendy men-pleasing capitulation, surely it is now time that you drop your ban on adulterous acts, or acts of fornication, or acts of theft, or acts of lying. After all, you want to be seen as a “caring community” – one which does not offend sinners and the surrounding pagan ethos.

Obviously all that would be fully consistent with your downward path. It will put you in good standing with secular culture, with the war against truth, and the attack on biblical Christianity. Atheists, homosexuals and the secular left will then even further sing your praises as you take these “caring” steps.

But Paul will not, nor Jesus, nor God. Indeed, Paul has already spoken clearly on this under the inspiration of the Holy Spirit in 1 Corinthians 6:9-11:

Or do you not know that the unrighteous will not inherit the kingdom of God? Do not be deceived: neither the sexually immoral, nor idolaters, nor adulterers, nor men who practice homosexuality, nor thieves, nor the greedy, nor drunkards, nor revilers, nor swindlers will inherit the kingdom of God. And such were some of you. But you were washed, you were sanctified, you were justified in the name of the Lord Jesus Christ and by the Spirit of our God.

Shame on you Baylor, shame. Sending people to hell in the name of “caring”. You don’t even know what the word means.

12 Replies to “Baylor: The Winnowing Fan at Work”