One good test to decide if we really are sons and daughters of the Living God is if we share his heart on important issues. The true child of God will of course think as God thinks and even feel as he feels. He will reflect his view and his stance on things.

As good a test as any on this one is the issue of homosexuality. Everywhere in Scripture this is presented as a grievous sin which always earns divine disapproval. Yet how many clueless Christians are running around with rainbows in solidarity with the homosexual agenda?

How many fake Christians are even claiming God makes people homosexual and he is just fine with it all? These people are deceived and have nothing of God’s heart on this. God hates sin, and so should we. God wants sinners to turn from their sins and repent, and so should we. 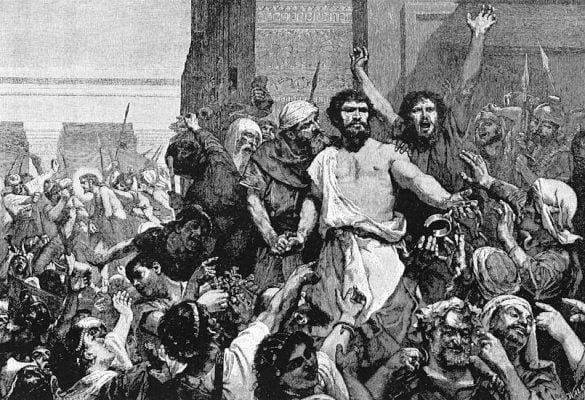 We certainly need the heart of God here. But so many people claiming to be Christians clearly do not have his heart on this sin. They celebrate, promote, endorse and glory in all things homosexual. They call good what God calls evil, the very thing the prophet Isaiah warned about in Isaiah 5:20.

In stark contrast to this sin-affirming and God-denying mindset and heart, consider one biblical character, and what we learn about him. Consider Lot in 2 Peter. Let me offer the larger context about this Old Testament figure as found in 2 Peter 2:4-10:

For if God did not spare angels when they sinned, but sent them to hell, putting them in chains of darkness to be held for judgment; if he did not spare the ancient world when he brought the flood on its ungodly people, but protected Noah, a preacher of righteousness, and seven others; if he condemned the cities of Sodom and Gomorrah by burning them to ashes, and made them an example of what is going to happen to the ungodly; and if he rescued Lot, a righteous man, who was distressed by the depraved conduct of the lawless (for that righteous man, living among them day after day, was tormented in his righteous soul by the lawless deeds he saw and heard) – if this is so, then the Lord knows how to rescue the godly from trials and to hold the unrighteous for punishment on the day of judgment. This is especially true of those who follow the corrupt desire of the flesh and despise authority.

Before commenting on Lot’s grief at sin, let me deal with something many might now be thinking: “Yeah but wasn’t Lot a bit of a dodgy character?” Well, yes and no. The fact that he chose to settle in Sodom seems like a poor choice indeed. And he offered his daughters to the evil men of Sodom, and later was involved in incest and drunkenness.

But a few things can be said here. As Thomas Schreiner comments, “clearly Lot was not without fault. Nonetheless, ancient readers would have saluted his courage in trying to protect those who were in his house, a matter of great danger when the whole city was at his doorstep. Indeed, Lot’s godliness was all the more remarkable given the context in which he lived.”

That is one of the grossest, most lurid descriptions of homosexual sin found anywhere in Scripture. These angels, disguised as men, appeared majestic and handsome, and the men in the town, who burned with lust toward men, came and surrounded the house of Lot. It was not hard to understand why Sodom is a synonym for homosexual sin.
When Lot heard this demand from the crowd, he offered them his virgin daughters. On the surface this seems like a horrific thing to do, but Lot, aware of the nature of the clamouring men, knew that they had no interest in women. He offered his daughters merely to protect the angels within his house.

But leaving aside some of these concerns we might have about Lot, let me return to what Peter has to say about him. Lot is called a “righteous man” and his “righteous soul” was “distressed” and “tormented” by all the homosexual evil he saw around him.

That is the point I wish to stress here. He is commended as righteous in large part because of his utter revulsion with the sin of homosexuality. This great evil distressed him and tormented his soul. Is that how we also react to a great evil like homosexuality?

Or do we instead make excuses for it, try to justify it, celebrate it, and promote it? Scripture makes it clear which response is the godly one, and which is the ungodly one. As Douglas Moo comments:

I wonder how many Christians are similarly “distressed” and “tormented” by sin. Perhaps, in seeking to excuse ourselves, we might respond that Lot was faced with a lot more sin than we. But I am not sure that the differences are all that great. The bible makes clear that the most serious sin of Sodom and Gomorrah was homosexuality. I hardly need to point out that homosexuality has, in the space of a few short years, become an accepted lifestyle in the United States….
And what is the reaction of Christians to the increasing abandonment of Christian moral norms? Many, to be sure, and to their credit, are responding vigorously with a loving but firm restatement of the biblical perspective on homosexuality. But many of us, I fear, are simply accepting what is happening without any undue fuss or concern. We are not “dismayed” or “tormented” by what we see around us. Oh, we may be disturbed by these developments and deplore those who choose an unbiblical lifestyle. But few Christians experience the “torment of the soul” that Lot felt as he faced the ungodliness of his society.

Yes exactly right. And of course it is not just homosexuality that should grieve us and bother us. All sexual sin should. Indeed, all sin, period. As Michael Green reminds us:

It is customary for Christians today, living in a secularized society, no longer to be shocked by sinful things which they see and hear. They will, for example, without protest, sit through a television program presenting material, which a generation ago they would never have contemplated watching at a theatre or cinema. But when a man’s conscience becomes dulled to sin, and apathetic about moral standards, he is no longer willing to look to the Lord for deliverance.

Yes we have become desensitised to sin, not just as a society, but as believers as well. Instead of having a holy hatred of sin and grief in our hearts over what is happening all around us, we adopt, we conform, we excuse, and we even participate in the sins of our pagan culture.

When believers end up taking the same view of sin as non-believers do, then you know the church is in deep trouble. And it is not just in the Old Testament that we find examples of godly men and women grieving deeply over the sin in a society.

Remember what we read about the Apostle Paul as he walked about the pagan culture as found in ancient Athens: “While Paul was waiting for them in Athens, he was greatly distressed to see that the city was full of idols” (Acts 17:16).

But so many Christians today instead of grieving deeply and being tormented about the moral freefall in the surrounding culture, just go along with it all, and seem totally unfazed by it. It means nothing to them. They have so much become like the world that their values are the same as the world’s values.

Indeed, so utterly corrupt and putrid is so much of the church today that we have countless “Christians” who will proudly fly rainbow flags and celebrate this ungodly deathstyle. They clearly do not have the heart of God. And they certainly are not his children.

Paul in Romans 1 uses homosexuality as the prime example of sin that unleashes the wrath of God. He concludes this section (1:18-32) by saying that those who suppress the truth in unrighteousness, and are given up by God, not only celebrate in this perversion but champion those who do: “Although they know God’s righteous decree that those who do such things deserve death, they not only continue to do these very things but also approve of those who practice them.”

Hating sin and loving righteousness like God does is a mark of the true Christian. Loving sin, encouraging sin, and parading sin is the mark of the false Christian. The choice is clear. I know where I stand. Do you?