You gotta wonder sometimes. Where is all the salt and light we are supposed to find whenever Christians are present? Why is there so little godly influence from the Christian churches? Why is Christianity in the West so lacking in any vital transformative power?

For example, in America there are said to be anywhere from 75-100 million evangelicals. That is a lotta Bible-believing Christians: a quarter to a third of all Americans claiming to be born-again believers. But if that is the case, why do we not seem to see any real fruit from that?

Where is the Christian influence there? Why are these Christians not acting as salt and light? I am not denying that there are many millions of Christians in America. And I am not claiming that they are all useless in service for the Kingdom. Sure, there are plenty of individual Christians and individual churches doing a lot of good all around the place. 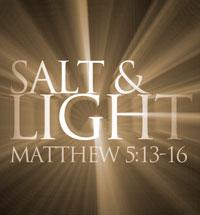 How have they managed to be either silent or missing in action when it comes to some of the crucial issues of the day, such as abortion, or the fight for marriage and family? Why the silence? Why the lack of a clear Christian presence? Why the clear inability to be salt and light when it is most needed?

And remember, it really does not take a lot of people to have an influence – for good or ill. Lenin and the Bolsheviks were quite small in number, but they managed to not only take over an entire nation (Russia) but also led to the domination of large parts of the globe.

In the same way – for good – Wilberforce and his allies were never great in number. There were probably at best a few dozen activists helping Wilberforce as he worked to overturn the slave trade. But even with the numbers against him, he managed to succeed – big time.

And of course Jesus had just a small motley crew of a dozen followers, but they managed to turn the world upside down, and we are still feeling the impact of this even today. So we do not necessarily need large numbers to accomplish mighty tasks (whether good or bad).

But we do need commitment, perseverance and some heroism out there. A few committed believers can make a real difference. Our Lord tends to prefer working that way anyhow. Recall Gideon and his 32,000 troops being pared down to just 300.

God can do great things even if a handful of faithful followers are found in a godless culture. Recall the story of Abraham and Sodom. In Genesis 18:20-32 we read:

God is always looking for a righteous remnant. But will he always find it? As Jesus said in Luke 18:8, “When the Son of Man comes, will he find faith on the earth?” I find myself asking that question even now. Where are all the sold-out believers who are making a difference for Christ and the Kingdom?

A recent article caught my attention which asks similar questions. The headline says this: “What if America had as many Christians as it does gay activists?” Now that grabbed my attention right away. How can such a tiny minority group of activists manage to destroy the institution of marriage? Where were all the Christians? Why did they not at least put up a fight?

Let me conclude with the opening half of this article:

3%.
That’s what it took to move America to where it is now.
3%.
That’s all that was required to transition us from a people who at least loosely based their morality on some vaguely understood and appreciated Christian foundation into one that is openly and proudly based on self-centered, self-referential, and self-serving lust.
3%.
That’s how much commitment on the ground was needed to shift us from cheering Wheaties-box Bruce Jenner as an example of All-American masculinity into a people that applauds Vanity Fair cover “Caitlyn” Jenner as the embodiment of “bravery” and “courage”.
3%….3%…3%…
Of all the many great and terrible lessons being taught to us now through the committed, believing, active 3% who have successfully stormed and pillaged the culture, one of the greatest and most important is this: 3% is enough.
With persistence, 3% is enough to move the culture from one extreme to another.
With belief in practice, the dedicated actions of 3% can accomplish what seemed impossible only 10 or 20 years earlier.
With faith in action, 3% can fundamentally change the world.
Let that soak in.
Let it sink in.
As much as it hurts, let it take root.
As much as it stings, let it linger.
As much as it exposes about our laughably non-Christian professing Christian culture in America over (at least) the past 100 years, let it take hold.
Let it speak.
Then ask the question: What if just 3% of Americans were as committed to Christ in action as the 3% who are at this moment dancing on the grave of our dead culture?
What if only 3% of Americans took seriously the comprehensive life- and culture-defining reality of the Gospel-fueled Great Commission?
What if a mere 3% of Americans we consecrated by the grace of God to the propagation of His Kingdom through loving obedience to His crystal clear command to take every thought captive and make obedient disciples of all nations (including – and starting with – our own)? (See Matthew 28:18-20.) What would our law, politics, economics, art, and culture begin to look like then?
Put another way: What if just 3% of those living in “the Christian nation” of America were actually Christians?

Some good questions there. Well worth pondering prayerfully and carefully.

19 Replies to “So Where Are All the Real Christians?”