In this series I have dealt with not only verses which can be difficult to understand and interpret, but verses which are simply often abused and misused. This verse is one of the latter cases. What it says is not all that hard to grasp, but how it can be applied and used can be problematic.

The verse says this: “Jesus said, ‘Father, forgive them, for they do not know what they are doing.’ And they divided up his clothes by casting lots.” This of course shows us the love of God in action, and divine forgiveness put to the test. Yet often I hear people using the words of Jesus here in a way that may not be all that appropriate.

That is, this phrase is often thrown up when we find an individual or a group engaged in real evil. It might be a Hitler or a Bin Laden, or the IS, or the Nazis. It might be ornery atheists or militant homosexual activists. As these evil agendas are being discussed, a person will say, ‘Yeah, but they know not what they are doing’. 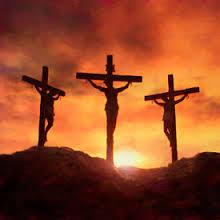 Well, yes and no. It is true that ‘the god of this world has blinded the eyes of those who don’t believe’ as Paul teaches in 2 Corinthians 4:4. So yes, satanic deception is always at work here. But we must guard against the error of assuming therefore that such people are no longer morally accountable.

We tend to think that if they are acting out of ignorance then they are not morally culpable for their actions. Thus if we are not careful here, we may end up making excuses for sinners and their sin, and seek to let them off the hook. It is always dangerous – and unbiblical – to play down sin and evil, make excuses for it, or seek to explain it away.

Evil exists, evil people exist, and evil acts are done every single day. So we must not use this passage in a way it was not intended to be used. Real sin exists because there are real sinners in the world. And they all are morally responsible for their actions, and all stand guilty before a holy God.

And it can also be said that many folks – perhaps most – do in fact know what they are doing. There is nothing helpful about being naïve here, or engaging in wishful thinking. The truth is, many evil people are hatching evil plans, and they know exactly what they are doing.

Furthermore, Jesus talks about forgiving them. Yes, that too is something we are called to do, but again, things are not always so cut and dried. Are we always to forgive anyone anytime, even if they do not repent? Is forgiveness unconditional?

Actually, Jesus himself spoke to this: “If your brother or sister sins against you, rebuke them; and if they repent, forgive them. Even if they sin against you seven times in a day and seven times come back to you saying ‘I repent,’ you must forgive them” (Luke 17:3-4).

So there seems to be the qualification of repentance here. But I have written about this in much more detail elsewhere, so please have a look at this: billmuehlenberg.com/2014/07/11/on-unconditional-forgiveness/

But there is a further reason why care must be used when employing this verse. Once again, considering the context can be of real help in such situations. And that is certainly the case here. Luke 23 is all about the crucifixion and burial of Jesus.

And the immediate context is about the Roman soldiers and how they treated Jesus during the crucifixion. So it could well be that it is to these soldiers that Jesus is speaking. If so, care may be needed in extrapolating these words directed to the soldiers at the crucifixion to everyone else in every other situation. As David Garland comments:

The antecedent of “them” could be limited to the Roman soldiers carrying out orders to execute him. The “they” naturally refers to the soldiers since their actions, crucifying Jesus (v. 33) and casting lots for his clothes (v. 34b), surround the saying. They would not have known the Law and the Prophets and probably lacked any information about his ministry.

And the Jewish leadership as a whole may also be in view here. If so, the counterbalance to forgiving evil is found in Peter’s address at Pentecost when he speaks of their culpability: “Therefore let all Israel be assured of this: God has made this Jesus, whom you crucified, both Lord and Messiah” (Acts 2:36).

Says Darrell Bock, if Jews are in view here, then the “ignorance that Jesus attributes to the nation is not a lack of knowledge, but an erroneous judgment about God’s activity.” The issue of national repentance is not an obstacle, says Bock, “since individuals can still respond. As to the inevitability of national catastrophe, Jesus is not asking for the judgment on the nation to be put off. The national consequences stand.”

In saying all this I am of course not seeking to minimise the power of divine love and forgiveness which Jesus always fully exemplified. Loving our enemies and praying for those who persecute us is a basic Christian duty, as Jesus made clear in the Sermon on the Mount.

And often those involved in great evil know full well what they are doing. So we must not make excuses for evil, or opt out of fighting evil. But we certainly can pray for those who oppose us, attack us, hate us, and resist the gospel. Some will see the light and be gloriously transformed.

Sadly not all will however, and they will face the music big time. They will have no excuses on that day, and will receive the full penalty for their sin and rebellion. In that day ignorance will not be an excuse. But for now, everyone has a chance to repent and turn to Christ.

Let us pray that they do.