Call it what you will, Planned Barrenhood or Banned Parenthood, the last few weeks have been a bit rough for the world’s largest baby killing organisation. Indeed, this is a story that keeps on giving. The group that videoed the diabolical dealings of PP, the Center for Medical Progress, have now released a second – and equally damning – video.

It keeps getting worse and worse. The new video shows a senior PP official haggling over the prices of fetal body parts. Toward the end of the 8-minute video, she even jokes about how she “wants a Lamborghini.” Well, those baby body parts do add up I guess. See it all here: www.youtube.com/watch?v=MjCs_gvImyw

There is no question that PP is right up there with the Nazis. This is a group that has a long history of demonic activities. Just recently they have been caught out on a number of gruesome deeds: 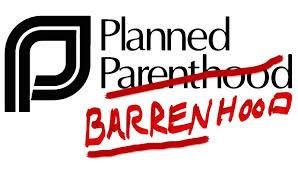 Well, given that PP was founded by the arch-eugenicist Margaret Sanger, what do we expect? You remember her, with such memorable quotes as:
“The handicapped, including the blind, deaf, dumb, mute and epileptics, are the dead weight of human waste.”
“Birth control must lead ultimately to a cleaner race.”
“The most merciful thing that a large family does to one of its infant members is to kill it.”
“Eugenics is … the most adequate and thorough avenue to the solution of racial, political and social problems.”
“The marriage bed is the most degenerating influence in the social order,”
“We do not want word to go out that we want to exterminate the Negro population.”

Nice, real nice. Her callous, heartless and diabolical views were the very basis of PP, and they continue in the same exact mindset today. So why are we surprised at these new revelations? This is simply PP at work. This is what it does for a living. This is its very purpose and function.

But all these new revelations are catching them out big time. If what they deal with (around 350,000 a year in the US alone) are merely clumps of cells one minute, how can they be human body parts (brains, livers, arms, legs, etc) the next minute? When it comes to making money, the misuse and abuse of the English language will do nicely thanks.

Yet in the US they also receive over a half billion dollars a year in taxpayer funding. And on top of that there is plenty of corporate sponsorship as well for these killers. In the US there are 41 corporations and organisations that directly contribute to PP.

This is not only a very well-oiled and efficient killing machine, it is a very lucrative one as well. Indeed, the average salary for a PP regional CEO is just a tad short of $200,000 per year. Killing babies is obviously a lot more profitable than teaching in a school or flipping burgers.

While PP is doing all the sorts of stuff that would make the Nazis proud (and they did learn a lot from Sanger and Co.), one of the more incredible things (but not unexpected) is how the mainstream media has been doing its best to ignore this story.

This is clearly one of the most important stories of the year, yet the lamestream media is doing all it can to avoid it. It is only because the alternative media has made so much of it that they have reluctantly been getting into the act. Mollie Hemingway has just done a piece documenting this despicable dereliction of duty. Compare the beat-up about the Confederate Flag to the PP story:

-The New York Times has run stories and essays on the Confederate flag 149 times since June 17 (and only 39 of those mention Roof), 41 of those in the first six days. That compares to three stories on Planned Parenthood during the same window, just 7 percent of what you’d expect if the New York Times considered those stories merely of equal importance.
-CNN has had 493 mentions of the Confederate flag since June 17 (only 188 of these even mention alleged church shooter Dylann Roof), and managed 167 in the first six days. In the first six days of the Planned Parenthood scandal, they managed 7 mentions, less than 5 percent what you’d expect if you considered those stories only of equal importance.

She mentions other major news outlets, then offers “a few stories that I might have reporters look into” if the MSM is having troubles trying to unearth a story. Here are just some of them:

-We’ve heard about serial murderer/abortionist Kermit Gosnell keeping trophies of his victims, abortion clinics dumping babies in the trash, and now Deborah Nucatola working to do “a little better than break even” in the sales of intact baby organs. What’s the standard procedure for disposal of the unborn children killed in abortion? Are there abortion clinic standards for this? Does it vary state by state? Do states even have regulations? Does Planned Parenthood have uniform regulations? If not, why not? If so, how are they enforced?
-How much money does Planned Parenthood receive via sales of baby organs? Do they keep records? Are those records trustworthy? How do we know? How significant are these funds to the abortion portion of Planned Parenthood’s operation? How does compensation for the children’s lungs, livers, hearts and brains vary by state, if they do vary?
-How far along in a pregnancy must a woman be for her child’s organs to be considered worthwhile for procurement, sale and transfer? How much does the value of a child’s liver, heart, lungs, etc., increase with time? Do the sales of baby organs form a significant enough part of Planned Parenthood’s business model to result in, say, filibustering of protections for late-term unborn children?
-What are the laws on trafficking in human body parts? Who wrote those laws? Was the abortion industry involved in writing those laws?
-How much money is made throughout the organ sale process? How do corporations make their way around laws prohibiting the express sale of human organs? What do ethicists say about these loopholes and workarounds?
-Could expert observers take us through Planned Parenthood’s various responses to the charges levied in the video? They don’t deny the charges. How is that significant?

Good questions indeed. If the MSM were really objective, unbiased, and neutral, they would be all over this story like a rash. But they are not. The overwhelming majority of those in the MSM are secular lefties who fully support abortion on demand. So of course they don’t want to cover this story.

They only want to go after Christians and conservatives. They sure don’t want to go after their own. That is why it is so absolutely essential that the alternative media exists. It is doing the job the MSM refuses to do. And I will also keep hammering away at stories like these.

Pro-life activist Lila Rose had this to say about the new video:

This latest video further illustrates the barbaric reality of business at Planned Parenthood – that after selling an abortion, Planned Parenthood works to improve their bottom line by harvesting the body parts of the child they have just killed. What has our nation come to that we allow the brutality of abortion upon our children, and then sell their broken bodies for profit, all the while, funding the perpetrator? While millions of Americans, on both sides of the political aisle, are expressing their horror at Planned Parenthood’s trafficking of preborn children’s bodies — their tiny lungs, hearts and livers — our taxpayer dollars continue to flow into the organization at the rate of over $500 million per year. Human rights are bipartisan — where is the outcry from presidential hopefuls Hillary Clinton, Donald Trump, Bernie Sanders, and others over sale of the parts of children? Silence in the face of such atrocity is complicity.

Exactly. Just as there was damnable silence from far too many Germans when the Nazis were freely doing their thing, and the concentration camps were filling up, so too we have way too much silence today. And it is not just the MSM who are abdicating their responsibilities here.

Most churches and Christian leaders are not saying a word about any of this. They don’t want to rock the boat, upset their congregations, and lose out on the weekly offering. They have blood on their hands. Their unwillingness to stand up for “the least of these” as Jesus put it will not go unnoticed come judgment day.

At the very least, all government funding of PP should stop immediately. We already have several Congressional investigations and at least seven US state investigations going on over this horrific activity. I hope many more such investigations take place, and I hope all the gory details get out far and wide.

And I hope that as a result of all this, PP closes its deadly doors, for good. If we all celebrated the closing of the doors of the death camps in Germany 70 years ago, we should be looking forward to the same here.

14 Replies to “The Ongoing Implosion of Planned Parenthood”