It took JRR Tolkien well over a decade to write his classic trilogy, The Lord of the Rings, which was released in 1954-1955. It was a follow-up to his 1937 work, The Hobbit. The three volumes soon enjoyed spectacular success, and it remains one of the greatest works of fiction written last century.

It is of course all about the battle between good and evil. There were nine characters who eventually comprised the fellowship of the ring: four hobbits (Frodo, Sam, Merry and Pippin), two men (Aragorn and Boromir), an elf (Legolas), a dwarf (Gimli), and a wizard (Gandalf the Grey).

They were under no illusions as to the nature of the enemy, and what was required of them to defeat this great evil. This was because the creator of these characters was well aware of the perilous days in which he lived. He had served in the First World War and nearly did so again in the Second.

But also as a Christian, he was well aware of the reality of evil, and the need to fight against it. He knew that evil existed and that it must be resisted. The LOTR is a very graphic depiction of these basic realities. Every time I read the books or watch the films I am so powerfully reminded that as a Christian, we are in a real war with real foes and with real casualties.

But I have written often about all this already, as for example here: billmuehlenberg.com/2014/12/30/tolkien-hobbits-warfare-and-realism/

Twenty-five years ago Australian author Hal Colebatch wrote a book entitled Return of the Heroes: The Lord of the Rings, Star Wars and Contemporary Culture. In it he said that these two sets of works contained the following elements:
-conflict between good and evil, with real heroes and real villains;
-the contrast between the ordinariness of the heroes and the destinies to which they are called;
-family and parents viewed as an important, crucial institution;
-the importance of the individual over against the state or the collective;
-emphasis on family heritages of honour and tradition; and
-the immortality of the individual soul and some form of final judgment.

These of course are all very important themes and emphases. And they are often in short supply in the West today. See my review of his book here: billmuehlenberg.com/1991/11/10/431/ 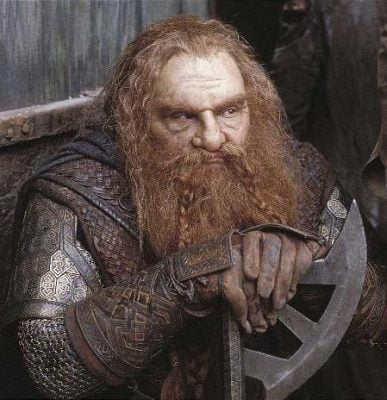 I write all this simply to highlight one character of Tolkien, but also the actor who played him. He has come out recently in true Tolkienesque form, taking on the forces of evil and political correctness. I refer to Welsh actor John Rhys-Davies who played Gimli in the film trilogy.

He has just recently spoken out loud and clear about evil in the world, and the need to confront it. But before I speak to this, let me point out that he is no stranger to challenging political correctness and threats to Western civilisation. A decade ago he had warned about the Islamisation of Europe, and he took a hammering for doing so. He said in January 2004:

There is a demographic catastrophe happening in Europe that nobody wants to talk about, that we daren’t bring up because we are so cagey about not offending people racially. And rightly we should be. But there is a cultural thing as well. By 2020, 50 per cent of the children in Holland under the age of 18 will be of Muslim descent. I think that Tolkien says that some generations will be challenged. And if they do not rise to meet that challenge, they will lose their civilisation. That does have a real resonance with me….
I am for dead, (traditional) white male culture. Many do not understand how precarious Western civilisation is and what a joy it is. From it, we get real democracy. From it, we get the sort of intellectual tolerance that allows me to propound something that may be completely alien to you. I’m burying my career so substantially in these interviews that it’s painful. But I think there are some questions that demand honest answers.

So he is certainly not afraid of speaking out. And he has done so again. In an interview with podcaster Adam Carolla earlier this week he again spoke up for what matters, warning against the forces arrayed against us. I offer part of one write-up on this:

“There is an extraordinary silence in the West,” Rhys-Davies told Carolla. “Basically, Christianity in the Middle East and in Africa is being wiped out – I mean not just ideologically but physically, and people are being enslaved and killed because they are Christians. And your country and my country (Wales) are doing nothing about it.”
“Why is it so evolved not to judge?” Carolla replied, identifying political correctness as the culprit. “This notion that we’ve evolved into a species that’s incapable of judging other groups and what they are doing, especially when it’s beheading people or setting people on fire or throwing acid in the face of schoolgirls… I like that kind of judging. That’s evolved!”
Carolla added that the U.S. “crushing Hitler” in World War II was a “good thing” that would not be possible now because Bill Maher would be “screaming” about tolerance.
“This is a unique age,” Rhys-Davies explained. “We don’t want to be judgmental. Every other age that’s come before us has believed exactly the opposite. I mean, T.S. Eliot referred to ‘the common pursuit of true judgement.’ Yes, that’s what it’s about. Getting our judgments right, getting them accurate.”
“Why can’t we get the same nations on the same page?” Carolla asked. “There’s a lot of nations that are never going to go down this road with us, but your nation, England, they’re sane. Why can’t we get them back toward sanity?”
“I think it’s an age where politicians don’t actually say what they believe,” the actor replied. “They are afraid of being judged as being partisan. Heaven forbid we should criticize people who, after all, share a different ‘value system.’ But ‘it’s all relevant, it’s all equally relative. We’re all the same. And God and the devil, they’re the same, aren’t they, really? Right and wrong? It’s really just two faces of the same coin.’”
“We have lost our moral compass completely, and unless we find it, we’re going to lose our civilization,” Rhys-Davies cautioned. “I think we’re going to lose Western European Christian civilization anyway.”

Now that is an actor I can relate to and take great pride in. Unlike so many Hollywood PC wimps and lefties, Rhys-Davies is well aware of the big picture, and the need to get involved. He is a hero in my books. We need more brave and intelligent men like him today.

Let me close with a fitting quote from the film version of the Return of the King:

Gandalf: “He has suffered a defeat, yes, but behind the walls of Mordor our enemy is regrouping.”
[Gimli sits on the steward’s throne, puffing on a pipe.]
Gimli: “Let him stay there. Let him rot! Why should we care?”
Gandalf: “Because ten thousand Orcs now stand between Frodo and Mount Doom.”
Gandalf: “I’ve sent him to his death.”
Aragorn: “No. There’s still hope for Frodo. He needs time, and safe passage across the Plains of Gorgoroth.”
Aragorn: “We can give him that.”
Gimli: “How?”
Aragorn: “Draw out Sauron’s armies. Empty his lands. Then we gather our full strength and march on the Black Gate.”
Éomer: “We cannot achieve victory through strength of arms.”
Aragorn: “Not for ourselves, but we can give Frodo his chance if we keep Sauron’s Eye fixed upon us.”
Aragorn: “Keep him blind to all else that moves.”
Legolas: “A diversion.”
Gimli: “Certainty of death. Small chance of success. What are we waiting for?”

6 Replies to “Tolkien, Gimli, Rhys-Davies and the Battle against Evil”