When Orwell’s 1984 appeared in 1949, Stalinist Russia provided much of the fodder for his dystopian vision, and for the menacing Big Brother. Well, the Soviet Union is no more, but we can argue that Big Brother totalitarianism is still alive and well in the West today.

And without question the militant homosexual juggernaut is nicely filling in for where the Communists left off. The homosexual militants are using the coercive powers of the state to crack down on all disagreement and opposition. And it gets uglier each passing day.

I recently wrote a book documenting nearly 200 cases of people directly being impacted by the new pink totalitarians. Ordinary men and women who run afoul of the homosexual agenda are losing their jobs, being fined, and even jailed. And this has simply escalated big time since then.

One of the examples I mentioned in Dangerous Relations was that of Jack Phillips, a baker in Colorado. He is another one to face the fury of the activists and the pink Big Brother. My website had featured articles about him several times. I first wrote about Phillips back in July of 2012, when he was being attacked for refusing to make a homosexual wedding cake. As I wrote back then: 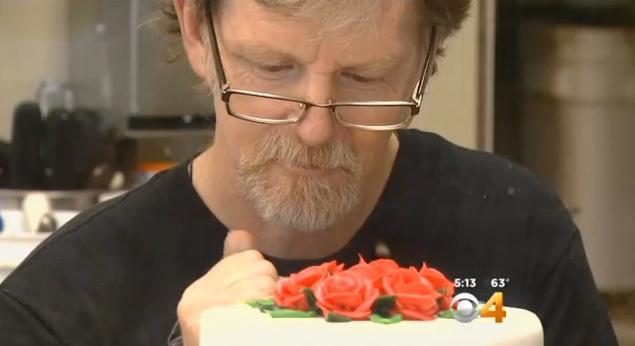 In an interview with CBS, he noted that he has no problem making birthday, graduation or other event cakes for homosexuals, but that wedding cakes are a different story. “If gays come in and want to order birthday cakes or any cakes for any occasion, graduations, or whatever, I have no prejudice against that whatsoever,” he said. “It’s just the wedding cake, not the people, not their lifestyle.”

In December 2013 I wrote this about him and the case:

“On Friday, Denver administrative law judge Robert Spence released a ruling that forces Jack Phillips, the owner of Masterpiece Cakeshop, to either make a wedding cake for two homosexual men who requested one or face fines and possible jail time.” There it is: you will violate your conscience and become a promoter of homosexuality and political correctness, or the State will punish you big time. That is exactly where the West is heading – a homosexualist police state.

Well, he took his case to an appeals court, and the decision has just come in: Phillips must bow to the activists and violate his conscience – end of story. Wow, so does that mean a Jewish baker will be forced to make a cake for a neo-Nazi social function?

Will a Muslim t-shirt company be forced to print t-shirts for Christians with the words “Jesus is God’s Son and Saviour” on it? Will homosexual florists be forced to cater for an anti-homosexual marriage function? Will atheist entertainers be forced to perform at Christian worship services?

As one report states about this latest development:

The Colorado Court of Appeals has upheld a lower court ruling requiring a Christian baker to make cakes for “gay weddings” despite his biblical beliefs not to be a partaker in other men’s sins. (1 Timothy 5:22) “We conclude that the act of same-sex marriage is closely correlated to Craig’s and Mullins’ sexual orientation, and therefore, [the initial arbiter] did not err when he found that Masterpiece’s refusal to create a wedding cake for Craig and Mullins was ‘because of’ their sexual orientation,’” the three-judge panel, consisting of Judges Daniel Taubman, Judge Michael Berger and Judge Alan Loeb, ruled on Thursday….
Phillips, who also declines to make Halloween cookies at his bakery, had told the men that he would be happy to make them any other type of baked goods outside of having to facilitate the ceremony, which he believed was a form of personal participation….
Alliance Defending Freedom (ADF), which is representing Phillips in court, says that it is considering the legal options at this time.
“Americans are guaranteed the freedom to live and work consistent with their faith. Government has a duty to protect people’s freedom to follow their beliefs personally and professionally rather than force them to adopt the government’s views,” said Senior Legal Counsel Jeremy Tedesco in a statement. “Jack simply exercised the long-cherished American freedom to decline to use his artistic talents to promote a message with which he disagrees. The court is wrong to deny Jack his fundamental freedoms.”

This is an utterly shocking case indeed, and already various commentators have weighed into the latest decision. As Peter LaBarbera of Americans for Truth about Homosexuality wrote:

We’re losing these cases at the lower courts (and state supreme courts), while the ACLU, which purports to defend “individual rights,” is celebrating the negation of Phillips’ freedom not to violate his strong Christian beliefs.
Is it just a coincidence that homosexualism and “progressivism” are leading the assault on religious freedom in America? Hardly. This case isn’t about “rights” or “discrimination” or “equality.” It’s about homosexual activists’ resentment of God and biblical truth and their obsessive drive to compel others to honor their sinful sexual behaviour – perhaps to quell their guilty conscience – using the force of law. Apparently many LGBT activists and allied “progressives” are willing to kill liberty itself to accomplish that goal.

Here are a few things Phillips didn’t do: He didn’t query consumers about their sexual preferences. He didn’t bar same-sex couples from purchasing a cake at a place of public accommodation. He didn’t ask consumers traveling in same-sex pairs to leave his shop. He didn’t hang a ‘No Gays Allowed’ sign in his window.
What he could never have known when he first opened his shop was that celebrating gay marriages would be a precondition for making a living. And when you consider that there are at least a few dozen other bakeries within a short drive from Masterpiece Cakeshop that could have accommodated the couple’s celebratory pastry needs, why would he?
Yet instead of exhibiting a basic level of tolerance (or dignity), two priggish bullies decided to call the authorities when Phillips refused to bake them a cake. And the cultural commissars at Colorado’s Civil Rights Commission soon ruled that he had discriminated against the couple.
The shop was not only ordered to alter store policy and start baking cakes for gay weddings–or else face debilitating fines, as is often reported in the media–but it was also forced to provide comprehensive staff training, ensure compliance, and then file quarterly obedience reports with the government for two years describing precisely which remedial measures it had taken to conform and documenting why any other patrons were denied service.
So, you know, I’m sure this is exactly how Jefferson imagined America would turn out when he was writing the Declaration of Independence….
The court has effectively tasked itself with determining for you when religion should matter. If nothing else, it’s comforting to know that Colorado can force an orthodox Islamic butcher to make sausages for a polyamorous bisexual bachelor/bachelorette party, so long as no one asks the butcher to outwardly promote swine and free love.
Not only does the court now apparently hold the power to bore into the souls of shopkeeps to establish that their religious objections aren’t authentic, but it can also decide when their prejudice is. It makes the risible assertion that any theological problem with gay marriage is really just “opposition” to the existence of gay Americans—whatever that means….
A person may have gay friends and relatives–they may even love their fellow gay Americans–but if they decline to participate in a same-sex wedding for theological reasons, the court wants us to assume they could only be motivated by bigotry.

If you admit – and many rational people do, even those who quarrel with the reasoning behind religious obstinacy – that millions of Christians hold some form of a genuine, long-standing religious conviction that prohibits them from celebrating gay marriages, but you still support state coercion against them, then you might as well just concede that religious freedom isn’t compatible with your conception of a contemporary society.
Whereas at one time the state wouldn’t substantially burden religious exercise and would use the least restrictive means to further “compelling interests,” the state today is inclined to substantially burden a Christian by the mere fact that someone’s feelings are hurt.

And if you think that is a bit of a stretch to say people can be severely punished for hurting someone’s feelings, simply recall the recent case of a bakery in Oregon run by a Christian couple. They were fined $135,000 for causing ‘emotional distress’ to a lesbian couple for not making them a wedding cake! I wrote about that mind-numbing decision here: billmuehlenberg.com/2015/06/23/more-islamic-and-homosexual-sharia/

Make no mistake about it: Big Brother is alive and well, and he comes in six colours of the rainbow. Goodbye freedom of conscience, freedom of speech, and freedom of religion. Welcome to the Brave New World of homosexual totalitarianism.

Christians can kiss freedom goodbye – they must bow down and serve their homosexual overlords.