True prophets of God are always very lonely and melancholic people. They deliver a word from the Lord, knowing it will mostly be rejected. Their hearts break as they carry the burden of the Lord, and realise that their words will be rejected and scorned by the very ones who most need them.

I am reading the prophets again, being back in Jeremiah at the moment. What an incredible book. Every chapter is absolutely filled with spiritual riches which are fully appropriate to where we are at today. And of course there is plenty of divine judgment spoken of in this book.

While there is judgment pronounced upon pagan nations, most of it is directed to sinful and hard-hearted Israel. Just today I read about why this judgment must come. As we find in Jeremiah 23:8-11:

My heart is broken within me;
all my bones tremble.
I am like a drunken man,
like a strong man overcome by wine,
because of the Lord
and his holy words.
The land is full of adulterers;
because of the curse the land lies parched
and the pastures in the wilderness are withered.
The prophets follow an evil course
and use their power unjustly.
“Both prophet and priest are godless;
even in my temple I find their wickedness,”
declares the Lord.

False prophets offering words of peace, comfort and ease are a big part of the problem. They are telling the people lies, and they love it so. As we read in 5:31: “The prophets prophesy lies, the priests rule by their own authority, and my people love it this way. But what will you do in the end?”

Jeremiah clearly warns about why all this disaster is happening. Yahweh’s covenant people have become faithless, idolatrous and rebellious, so they are paying the price. As we read in these two passages:

-“When you tell these people all this and they ask you, ‘Why has the Lord decreed such a great disaster against us? What wrong have we done? What sin have we committed against the Lord our God?’ then say to them, ‘It is because your fathers forsook me,’ declares the LORD, ‘and followed other gods and served and worshiped them. They forsook me and did not keep my law.” (Jeremiah 16:10-11)

-“All this happened because you people sinned against the LORD and did not obey him.” (Jeremiah 40:3) 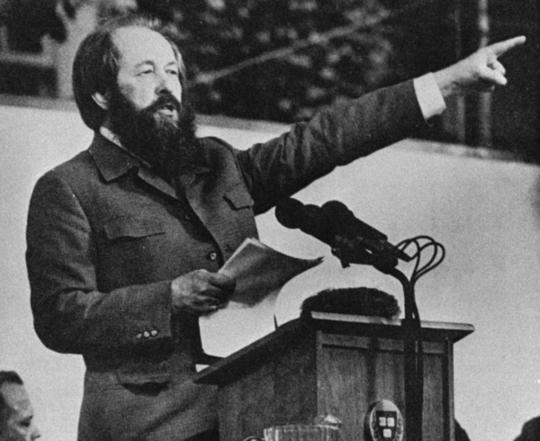 Modern day prophets have said exactly the same thing, and they too have been rejected and despised. The Russian dissident Aleksandr Solzhenitsyn, who spent over a decade in the Soviet Gulag, was one such prophetic voice who was rejected by the West.

Consider his speech, “Godlessness: the First Step to the Gulag”. It was his Templeton Prize Lecture, delivered in London on May 10, 1983. It opens this way:

More than half a century ago, while I was still a child, I recall hearing a number of older people offer the following explanation for the great disasters that had befallen Russia: Men have forgotten God; that’s why all this has happened.
Since then I have spent well-nigh fifty years working on the history of our Revolution; in the process I have read hundreds of books, collected hundreds of personal testimonies, and have already contributed eight volumes of my own toward the effort of clearing away the rubble left by that upheaval. But if I were asked today to formulate as concisely as possible the main cause of the ruinous Revolution that swallowed up some sixty million of our people, I could not put it more accurately than to repeat: Men have forgotten God; that’s why all this has happened.

That last line comes straight out of Jeremiah of course. He concludes his important address as follows:

To the ill-considered hopes of the last two centuries, which have reduced us to insignificance and brought us to the brink of nuclear and non-nuclear death, we can propose only a determined quest for the warm hand of God, which we have so rashly and self-confidently spurned. Only in this way can our eyes be opened to the errors of this unfortunate twentieth century and our bands be directed to setting them right. There is nothing else to cling to in the landslide: the combined vision of all the thinkers of the Enlightenment amounts to nothing.
Our five continents are caught in a whirlwind. But it is during trials such as these that the highest gifts of the human spirit are manifested. If we perish and lose this world, the fault will be ours alone.

This was not the first time he denounced the godless West and warned them that their fate would be the same as Russia’s. He had been giving such prophetic words for years already. One of the most significant of these prophetic talks was the commencement address he gave at Harvard University on June 8, 1978.

Some 20,000 people heard him deliver this speech in Russian, with English translation, on the occasion of the 327th commencement at Harvard. Hopes were high when he began, but the audience soon turned on the speaker. The prophet gave a word they did not want to hear.

He told them their secularism and hedonism would destroy America and the West just as godless communism had destroyed Russia. He warned in the strongest of words that they could avoid this fate only if God was brought back into the picture. For this he was roundly booed by the Harvard intelligentsia.

The speech was printed as A World Split Apart (Harper & Row, 1978). It is a slim paperback of 60 pages (half in Russian and half in English). I pulled this off my shelves today and here offer a few select quotes. He spoke, for example, about the difference between “freedom for good” and “freedom for evil”:

Destructive and irresponsible freedom has been granted boundless space. Society has turned out to have scarce defense against the abyss of human decadence, for example against the misuse of liberty for moral violence against young people, such as motion pictures full of pornography, crime, and horror. This is all considered to be part of freedom.

He also spoke of the loss of will in the West:

No weapons, no matter how powerful, can help the West until it overcomes its loss of willpower. In a state of psychological weakness, weapons become a burden for the capitulating side. To defend oneself, one must also be ready to die; there is little such readiness in a society raised in the cult of material well-being. Nothing is left, then, but concessions, attempts to gain time and betrayal.

He tells us how and why the West has declined so rapidly and so profoundly:

In early democracies, as in American democracy at the time of its birth, all individual human rights were granted because man is God’s creature. That is, freedom was given to the individual conditionally, in the assumption of his constant religious responsibility. Such was the heritage of the preceding thousand years. Two hundred or even fifty years ago, it would have seemed quite impossible, in America, that an individual could be granted boundless freedom simply for the satisfaction of his instincts or whims. Subsequently, however, all such limitations were discarded everywhere in the West; a total liberation occurred from the moral heritage of Christian centuries with their great reserves of mercy and sacrifice. State systems were becoming increasingly and totally materialistic. The West ended up by truly enforcing human rights, sometimes even excessively, but man’s sense of responsibility to God and society grew dimmer and dimmer. In the past decades, the legalistically selfish aspect of Western approach and thinking has reached its final dimension and the world wound up in a harsh spiritual crisis and a political impasse. All the glorified technological achievements of Progress, including the conquest of outer space, do not redeem the Twentieth century’s moral poverty which no one could imagine even as late as in the Nineteenth Century.

As mentioned, the elites at Harvard were not interested in such talk. His speech caused a huge controversy, and it became clear that this was another prophet being rejected by the people. But of course he has been found to be proven right.

The West is on its last legs, and this is because we have vainly thought we could progress, be free, and be strong, while telling God to get lost. That cannot work. Now we are paying the price big time. As Jeremiah and Solzhenitsyn both said:

Men have forgotten God; that’s why all this has happened.