All Christians say they believe in prayer but…. I wonder how much we really believe in the efficacy and vital importance of prayer. If we really did, I suspect we would be praying a whole lot more than we now are. The battles behind the scenes in the spiritual realms are where the real action is.

But because it is in the invisible realm, we so easily ignore or overlook the huge significance of prayer and spiritual warfare. But it underlays everything we successfully do for the Kingdom. Sure, at the end of the day it is the grace of God that brings about such victory, but he works through his people.

And when his people pray like mad – and work like mad – things get accomplished. This is the only real explanation I can give when people ask me why Australia so far has managed to resist homosexual marriage. After all, there have been some 16 different pro-homosexual marriage bills introduced over the past 12 years or so.

Yet thus far every single one of them has been defeated! Why is this? Why are we holding the line while so many other nations have succumbed? I am not sure if we are all that different from many other Western nations that have fallen in this way.

But I do know that prayer and fasting – at least by a small percentage of dedicated Christians – has been a big part of the action taking place here for some years now. Sure there has been plenty of lobbying and letter writing and public meetings and so on.

I have been involved in much of this, as have some others. And all this must be done. But without serious, concentrated prayer, I do not think we could have prevailed. Yet we sell ourselves short so often as believers by failing to pray, and failing to appreciate the power of prayer.

As Alfred Lord Tennyson once put it, “More things are wrought by prayer than this world dreams of.” That is quite right. All these battles – be they over marriage and family, the sanctity of life, the onslaught of creeping sharia – are ultimately spiritual battles.

There are real fights taking place in the heavenlies over all these issues, so we must engage in the spiritual realm. Now, as I keep having to remind people, these spiritual battles are also fought out on so many other levels: the political, the social, the cultural, the judicial, the ideological, and so on.

Thus we must fight on every level if we expect to win these battles. We must pray like we have never prayed before. But we must also enter into the social and political debates. We must visit MPs, we must write letters, we must get involved in political parties, and of course we must carefully inform ourselves about the issues.

There have been some great pro-marriage champs in Australia fighting the good fight. We need every single one of them. But there have also been mighty prayer warriors who have interceded and fasted and prayed often – we need these warriors as well.

I was speaking recently to one champion who embodies both callings. Warwick Marsh and I were both amazed at how things are happening – miraculous things really – in the marriage debate. The simple truth is, everything’s going against us, as usual.

The other side has all the money, all the influence, all the political muscle, all the attention of the media, all the activists with plenty of time on their hands, etc. We have none of this. But we do have one thing the other side does not have: the ability to pray to and call upon the God of heaven to come to our aid, to glorify his name, and to protect his valued institutions like marriage.

We do not have the numbers, the money or the political and media clout, but we do have the King of Kings and Lord of Lords. That is enough for me. As I have often said, if I end up being the last man in Australia to fight for marriage and family, I will do so, knowing that I am not alone. God will never abandon his own, so that gives me courage to keep on keeping on.

In our chat we discussed the many miraculous events of the past few weeks, and we agreed that all this can only be put down to prayer and fasting. Of course, plenty of hard work has gone into it, but at the end of the day, it is spiritual fire power that has swung things around.

Consider all the heavy duty things happening in the past week or two. Most amazing was the very solid stance by Prime Minister Abbott on the conscience vote, and getting a clear majority of his own side to hold the line there. That was a small miracle – no question about it. 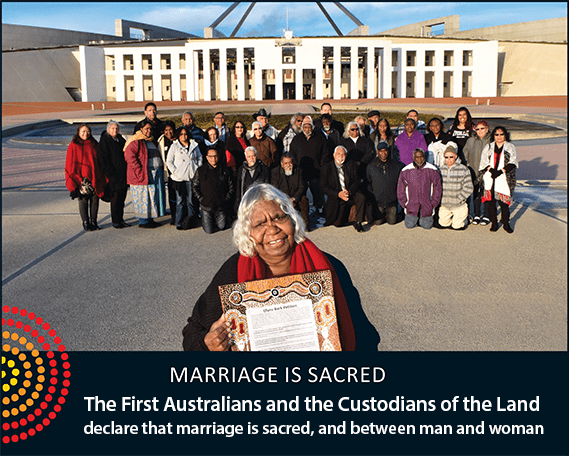 And think of all the other amazing things happening of late:

-The pro-marriage display of flowers at Parliament House, Canberra, nicely ignored by the media, but a powerful gesture nonetheless. As Ros Phillips of FamilyVoice Australia said, “We saw the rainbow, but where were the flowers?”

“Canberra Airport, lit up with the colours of the spectrum, was beamed across the nation to promote same-sex marriage yesterday. But the display of thousands of flowers on Capital Hill, thanking the PM for standing firm for marriage’s time-honoured complementary meaning, was effectively invisible.”

-The powerful and moving marriage declaration by members of the Aboriginal community was also an amazing activity witnessed at Parliament House. While much of the media ignored this as well, it was a terrific stance for marriage. See their site here: ulurubarkpetition.com/

-A host of expert speakers from North America have also graced our shores of late. We just had Dawn Stefanowicz for example. She has an incredible story of being raised in a homosexual household. I have discussed her earlier: billmuehlenberg.com/2009/10/25/a-review-of-out-from-under-the-impact-of-homosexual-parenting-by-dawn-stefanowicz/

-We also had Katy Faust from America sharing her moving story of being raised by lesbians, but being fully against homosexual marriage. Not only did she make it on to Lateline last week, but various other media outlets as well. I discuss her time on the ABC here: billmuehlenberg.com/2015/08/13/speaking-truth-on-homosexual-marriage-and-parenting/

-And Dr Ryan Anderson is here this week, speaking in Canberra and Melbourne. He is one of America’s leading defenders of marriage and family. With a new book out, he has so much of help to offer. I reviewed his previous volume here: billmuehlenberg.com/2013/01/07/a-review-of-what-is-marriage-by-sherif-girgis-ryan-anderson-and-robert-george/

-In addition to the rather established pro-family groups like the AFA, ACL, FV, Salt Shakers, and Life Ministries, there are also exciting new groups emerging such as the Marriage Alliance and the Australian Marriage Forum. So fresh blood is entering into the fray. That is great news for some of us old guys.

As I mentioned to Warwick, some years ago when a disastrous political outcome occurred in Australia, I was on my face before God praying all this through, asking why it happened. The answer I seemed to get was from 1 Kings 18:1-4.

This has to do with Elijah’s confrontation with the wicked King Ahab, and the fact that Yahweh had hid two groups of fifty prophets in caves during this time. I really was not sure what that all meant at the time. But now I am beginning to see, with the advantage of hindsight.

God has reserved for himself his prophets, his warriors, his champions. And at the right time they will emerge from where they are, and enter into these public battles. Not only are new organisations springing up around Australia to champion the causes of God and righteousness, but many individuals as well – even young ones.

I have been meeting so many new young Christian warriors who are gung-ho, ready to enter the battles. Five years ago none of them seemed to exist, but now they are emerging all over the place. That is very encouraging!

Speaking of Katy Faust, she will be on tonight’s Q&A. This is an interesting outcome of both prayer and activism. After many complaints about the extreme leftist bias of the ABC and Q&A, they have been forced to move ever slightly in the direction of fairness and having all sides given a say.

Thus those on the show tonight can be broken down politically and ideologically as follows:
-Host Tony Jones is a lefty pro-homosexual.
-The two Greens and Labor Senators are lefties and pro-homosexual.
-The Liberal MP Kelly O’Dwyer is not exactly conservative, and favours homosexual marriage.
-That leaves two who are opposed to homosexual marriage, and they are an odd couple indeed: atheist and Marxist Brendan O’Neil from the UK and Katy Faust from the US.

So the fact that two voices at the same time opposed to homosexual marriage are allowed on to Q&A is itself a minor miracle. So please pray for that debate and please tune in. As I told Katy just recently, we are praying much for her, and our real rest will come in eternity – in the meantime we have a lot of work to do!

So much has already been done with terrific outcomes. But many things remain. Please pray for Katy tonight. And try to get to see Ryan Anderson Tuesday night in Canberra and Thursday night in Melbourne, Also make sure to grab his important new book.

Plenty has been happening in the marriage wars. The other side as always has been extremely active. But thankfully some on our side are working, and hopefully even more are praying. And those prayers are bearing fruit. We have seen a few nice victories these past few weeks, and I believe we will see more to come.

All this because God’s people are praying, fasting, interceding and engaging in much-needed spiritual warfare. Thank you saints for praying. We need many more like you. And thanks to the various prayer and intercession groups which have been so active here.

We must pray even harder and more often in the days ahead – and work even more as well. Who will join with me in this? Remember what D.L. Moody said: “Every great movement of God can be traced to a kneeling figure.”

26 Replies to “Prayer and the Transformation of Nations”