The West is in a war. It has enemies aplenty but most of them are in the West itself. Those most eager to destroy the West are not hostile forces from without, but enemies from within. And the mainstream media is now fully involved in this war against the West.

Western media is leftist media, and it is hostile to what most folks in the West believe in and value. Many social commentators have made this case. Early on in his 2011 volume Righteous Indignation Andrew Breitbart put it this way:

Make no mistake: America is in a media war. It is an extension of the Cold War that never ended but shifted to an electronic front. The war between freedom and statism ended geographically when the Berlin Wall fell. But the existential battle never ceased. When the Soviet Union disintegrated, the battle simply took a different form. Instead of missiles the new weapon was language and education, and the international left had successfully constructed a global infrastructure to get its message out. 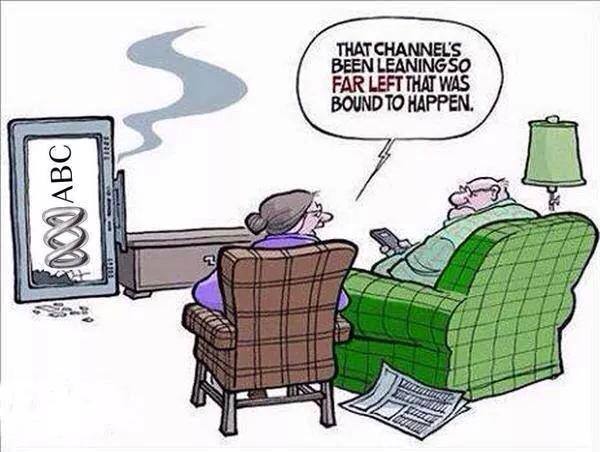 Exactly right. To understand the Australian media in general, and the ABC in particular, one simply has to be aware of this larger ideological framework. Then all the daily outrages perpetrated by groups like “our” ABC will all make sense. I have documented dozens of cases of outrageous bias, anti-Christian bigotry, and extreme left nonsense pouring forth on a regular basis from the national broadcaster.

Consider the most recent outrage – another “accident” which the ABC head honcho had to again “apologize” for. This despicable network is so utterly consumed in its diabolical hatred of all things conservative, Christian and especially Tony Abbott, that it just cannot stop venting its darkened spleen.

The devils there thought it would be fun to allow through yet another anti-Abbott tweet, with an account called “AbbotLovesAnal”. Gotta love the classy, professional folks who work at “our” ABC. So hate-filled are they, that any gutter crap will be given free run – as long as Abbott is crucified no matter what. Rita Panahi was spot on when she wrote:

Here we go again. The genius crew at the helm of the ABC’s flagship program, Q&A, have yet again covered themselves in ignominy. The decision to broadcast a tweet from an account with a highly offensive handle was either a malicious act of bastardry designed to embarrass Prime Minister Tony Abbott or simply due to gross ineptitude.
You can never be sure with the ABC but it’s remarkable that the lapses, factual errors and unfortunate “accidents” that occur with regular monotony on the behemoth’s many platforms tend to vilify only one side of politics.
Less than three weeks since the Prime Minister lifted a ban on government front benchers appearing on the program, the ideologues at the helm of Q&A have shown they’ve learnt nothing from the Zaky Mallah saga. Hapless CEO Mark Scott was once more left to apologise for the conduct of an organisation that has become a law unto itself.

The simple truth is the ABC is absolutely crawling with Abbott-haters, and they will seek to get away with any vile attack they can, all the while living the good life off our tax dollars. And that the ABC is crawling with lefties, Labor supporters, and anti-Abbott nut jobs is not mere speculation.

A recent piece posted at the Larry Pickering site is most revealing in this regard. It points out the uber-incestuous relationship between the Labor Party and ABC heavyweight:

Hmm, why is all this not one bit surprising? These clowns deny their bias every day of the week, but they are up to their ears in political leftism, and proud of it. Indeed, were we able to do a poll of the voting record of the ABC leadership, I do not doubt for a moment we would find that Labor and the Greens would get 90 per cent of their vote.

American studies have found just that: folks in the media there overwhelmingly vote Democrat, are pro-abortion, pro-homosexuality, pro-big government, and so on. It is obvious in everything we find coming from these media outlets. It is a shameless control of the narrative, to push leftist agendas.

Some years ago now Chris Kenny wrote an article on “Whose ABC?” It is well worth repeating parts of it here. Writing in 2011 he said:

The ABC is certainly the most influential cultural institution in the nation, increasing its complexity and reach almost by the day. The corporation consists of six national and international radio stations, five television stations, online services, publishing and retailing, with annual public funding topping $1 billion, and more than 5000 staff in more than 70 locations in Australia and overseas. Yet as it has expanded there has been no commensurate increase in accountability or responsiveness to the public who fund it.

Insiders talk about recruitment policies fuelling a political culture, particular in the Sydney and Melbourne city headquarters, at Ultimo and Southbank, where about half of all ABC staff members are based. There is a relatively low staff turnover so many employees have spent most of their working lives in the ABC, in the main cities. One former board member says recruiting people from a greater variety of backgrounds should be a high priority.
A very different ABC culture exists in the regions, but it has little influence outside of those regions. The ABC is still a heavily centralised beast, with all its operations outside the Sydney-Melbourne-Canberra axis referred to disparagingly as the BAPH states (Brisbane, Adelaide, Perth, Hobart). Each capital has a state director, but because the operations are divided into national silos of television, radio, news and the like, board members believe state directors find it difficult to have any real impact. All big decisions are made in Ultimo. Staff outside NSW jokingly refer to their employer as the SBS: Sydney Broadcasting Service.
There are no easy answers to this Sydney-centric reality except to be aware of it.

But there is no end to the ways the ABC can keep pushing bias. As Kenny wrote just recently:

The ABC seems to have found a novel way to guard against the Green Left bias shown by so many of its leading presenters. Instead of having them conduct their own interviews, Auntie can simply have them read out questions from audiences.
On Lateline last week Tony Jones was interviewing former Labor environment minister Greg Combet. “Let’s go to a Facebook question,” said Jones. “This is from Linda Mae Reeb and it’s on this subject, she asks, ‘Can you estimate the investment required in the Australian renewable market to achieve a 50 per cent reduction in emissions?’ ”
Combet nodded as Jones read it out. Why wouldn’t he? What a pleasant break from the rigours of a forensic television interrogation.
We look forward to similar intermezzos when government ministers are grilled. “I know you’re on the back foot now, Treasurer, and my questioning is getting just a little snide,” Sarah Ferguson might say, “so let’s go to a Facebook question on taxation reform”.
Given revelations about high ABC salaries, perhaps this is also a way to save the public broadcaster some money. There are plenty of presentable and relatively cut-price juniors who could sit in the chair and read out the online questions.
No doubt government staffers are busy setting up fake Facebook accounts so they can post their curly queries. “Prime Minister, if we could just leave the Speaker’s woes and budget difficulties there for a moment we have a Facebook question,” Leigh Sales might say. “This one is from Jenny at Mt Druitt and she asks, ‘To what do you attribute your greatness?’”
Next, no doubt, we’ll have to commission an investigation into question selection. Perhaps a committee could be formed to devise an ABC code of conduct for social media question selection and presentation. A strong tip for rule No 1 would be to ignore Zaky Mallah’s Facebook questions until further notice.

There is no reason in the world why taxpayers must subsidise this gross and appalling bias. De-fund now.

7 Replies to “The Media, the ABC, and Leftist Propaganda”