Islam has a game plan. The West just plays games. That is why, unless things change drastically, the West will lose and Islam will triumph. The 1400-year old dream of a global caliphate established by aggressive Islamic imperialism remains on the table, while the West dithers about with more important matters like Bruce Jenner and Miley Cyrus. 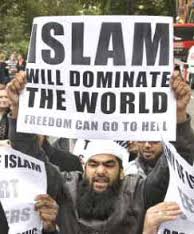 The decline of the West has been documented time and time again. America, once the light on the hill, and the leader of the free world, is now but a shadow of its former shelf, with Obama doing all he can to relegate it to the trash heap of history.

In the recent past when the world was threatened by godless Communism, we had Reagan, Thatcher and Pope John Paul II to help defeat this horrific enemy. Today we have a guy in the White house who prefers to spend all his spare time on the golf course.

And in the meanwhile IS is steadily advancing. As one wag quipped, if Reagan were still around, ISIS would be WASWAS. But not under the girly man and dhimmi we now have in office. So Islam advances while the West recedes.

And into the vacuum steps someone like Putin, who seems a lot more concerned lately with defending Christian values and Christian civilisation than Obama ever has. He is even doing what America should have done long ago: “bombing the crap out of” IS in Syria, as one commentator put it. He continues:

“Putin has now made it official and uncontestable that the United States is no longer in the superpower business. We have lost our place in the world order thanks to the massive incompetence (not to mention intentional malfeasance) of the Obama administration – including former Secretary of Scapegoating Hillary ‘reset button’ Clinton.”

Two recent articles on the nefarious spread of Islam in the West just caught my eye, so let me quote from each. Islam expert Raymond Ibrahim writes about “Europe’s Migrant Crisis, Islamic History, and Western Fantasy”. The West does just not understand Islam he argues. He states:

This dichotomy of Muslim and Western thinking is evident everywhere. When the Islamic State declared that it will “conquer Rome” and “break its crosses,” few in the West realized that those are the verbatim words and goals of Islam’s founder and his companions as recorded in Muslim sources — words and goals that prompted over a thousand years of jihad on Europe.
Most recently, the Islamic State released a map of the areas it plans on expanding into over the next five years. Not only are Mideast and Asian regions included, but the map includes European lands: Portugal, Spain, Hungary, the Czech Republic, Slovakia, Greece, parts of Russia, Bulgaria, Ukraine, Romania, Armenia, Georgia, Crete, and Cyprus.
The reason for this is simple. According to Islamic law, once a country has been conquered (or “opened,” as the euphemistic Arabic words it), it becomes Islamic in perpetuity….
All of the aforementioned European nations are seen as being currently “occupied” by Christian “infidels” and in need of “liberation.” This is why jihadi organizations refer to terrorist attacks on such countries as “defensive jihads.” One rarely hears about Islamic designs on European nations because they are large and blocked together, altogether distant from the Muslim world. Conversely, tiny Israel is in the heart of the Islamic world, hence it has received most of the jihadi attention: it was a more realistic conquest. But now that the “caliphate” has been reborn and is expanding before a paralytic West, dreams of reconquering portions of Europe — if not through jihad, then through migration — are becoming more plausible, perhaps more so than conquering Israel….
Meanwhile, in schools across much of the Muslim world, children are being indoctrinated into glorifying and reminiscing about the jihadi conquests of yore — conquests by the sword and in the name of Allah. While the progressive West demonizes European/Christian history (when I was in elementary school, Christopher Columbus was a hero; when I got into college, he became a villain), Mehmet the Conqueror, whose atrocities against Christian Europeans make the Islamic State look like boy scouts, is praised every year in “secular” Turkey on the anniversary of the savage sack of Constantinople.

The current Syrian refugee crisis is another thing the West just does not properly understand – nor most gullible Christians for that matter:

The result of Western fantasies and Islamic history is that today Muslims are entering the West unfettered in the guise of refugees. They refuse to assimilate with the “infidels,” and form enclaves — in Islamic terminology, ribats — that serve as frontier posts to wage jihad against the infidel one way or another.
This is not conjecture. The Islamic State is intentionally driving the refugee phenomenon and has promised to send half a million people — mostly Muslims — into Europe. It claims that 4,000 of these refugees are its own operatives:
Just wait. … It’s our dream that there should be a caliphate not only in Syria but in all the world, and we will have it soon, inshallah.
It is often said that those who ignore history are destined to repeat it. What happens to those who rewrite history in a way to demonize their ancestors while whitewashing the crimes of their ancestors’ enemies? The result is before us. History is not repeating itself; sword-waving Muslims are not militarily conquering Europe. Rather, they are being allowed to walk right in.

Also, consider the role of the mosque in Islamic thought and practice. Most Westerners – including Western leaders – are utterly clueless as to what goes on in the Islamic mosque. Thus we have leaders like Turnbull and others here in Australia making excuses for Islamic jihadists who are killing our people on our streets.

They speak about “radicalised youth” when they should be speaking about the radical political ideology known as Islam. And the mosque plays a key role in all of this, as we just saw once again when the 15yo Muslim youth did his shooting spree just after leaving a Sydney mosque.

I have written before on the sinister nature of the mosque, eg: billmuehlenberg.com/2014/03/28/the-significance-of-the-mosque/

But a helpful piece on this by Harry Richardson has just appeared, entitled “So you thought mosques were just places of worship?” He begins:

In local councils across Australia, and indeed most of the Western World, applications are pending for the building of new Mosques. Until recently, these applications would have been approved with little more than a rubber stamp and a few suggestions as to local planning. Today however, things have changed. Mosque applications have become rallying points for community anger and hostility. Demonstrations and campaigns are becoming commonplace.

He goes on to ask, what is a mosque?

It is vitally important to understand what a mosque represents in Islam. A mosque is not like a church or a temple, it is much more than a place for Muslims to simply worship their God (Allah). Mosques are modelled on the first mosque established by Mohammed in Medina which was a seat of government, a command centre, a court, a military training centre and an arms depot. Mosque leaders today raise religious decrees, enforce Islamic doctrine, monitor conduct, punish transgressors and command actions including requirements to conduct Jihad. A mosque is much more than a church.

He looks at how various Islamic lands see all this, such as Turkey:

The Prime Minister of Turkey, Recep Tayyip Erdogan, understood the military nature of a mosque when he stated: “A mosque is our barracks, the domes our helmets, minarets our bayonets and the faithful are our soldiers.” Islam’s founder, the Prophet Mohammed, was not just a religious leader but a political and military one too. He raised armies and fought and killed people until he was the King of the whole of Arabia. The religion of Islam is entirely based on the example and teachings of Mohammed. Unlike any other major religion therefore, Islam is also a political and military force.

He finishes by looking again at mosque building in Australia:

Question: Why are so many mosques being built?
Answer: Muslims currently have over 370 mosques in Australia which, per capita, is more than six times the number of Buddhist and Hindu temples. This could well be because the mosque is intended as a beachhead for Islam, a place to plan Jihad and to implement Sharia law.
Question: Why do mosques have capacities that cater for far greater numbers than those in local Muslim communities?
Answer: The mosque is deliberately built to dominate the neighbourhood to show the supremacy of Islam over Christianity and all other faiths.
Mosque teachings in Australia
What is taught in the mosque comes directly from the Qur’an, the Hadith and Sira, and the ‘Reliance of the Traveller’, which is the Manual of Islamic Law. The Manual of Islamic Law teaches in Law O9.0 that it is a communal obligation for Muslims to wage Jihad to establish Islam as the religion and the law. In the Hadith of Muslim, book 41 No. 6985, Muslims are told to slaughter the Jews.
There are many examples of these teachings being delivered in mosques which give cause for alarm.
1. On April 27 in the Preston mosque in Melbourne, an audio tape exists of brother Baha delivering a speech calling on Muslims to engage in Jihad against Australians (in line with Islamic Law O9.0)
2. Sheik Feiz Mohammed who teaches at a mosque in Auburn in Western Sydney, is on video calling for the mass slaughter of all Jews, while making pig noises. (This is perhaps inspired by the Hadith of Muslim book 41 No. 6985)
3. Sheik Hilaly of the Lakemba mosque, a former Grand Mufti of Australia, defended the rape of women who were not covered in acceptable Islamic dress. There is now evidence of a rape epidemic in Europe by Muslims because Islamic Sharia law does not penalise a Muslim for raping a non-Muslim woman.

We need to learn about Islam. We need to understand that it is an expansionist, imperialistic political ideology which brooks no rivals. We also need a revitalised and reenergised West. While the march of Islam will continue apace, one can rightly ask if the West will wake up, learn to discern what is happening, and stand up for its values once again.

Or will it continue to roll over and play dead.

10 Replies to “Islam Advances While the West Sleeps”