As I have often said, sin and rebellion, if left unchecked, will simply produce more sin and rebellion. It all just spins out of control and compounds, accelerates and multiplies. This is of course true of the individual, but it is also true of a culture or even a church.

When known error and sin is embraced and excused, then more sin and error will be run with. Pretty soon we have full blown apostasy, if we are talking about a believer or a church or a denomination. As sin goes by un-repented of, and even condoned and justified, then we have what Scripture refers to as apostasy.

Various passages speak to this, and offer strong warnings about falling away and hardening one’s heart and being deceived by sin. Let me just offer a few of these here:

Acts 20:29-31 I know that after I leave, savage wolves will come in among you and will not spare the flock. Even from your own number men will arise and distort the truth in order to draw away disciples after them. So be on your guard!

1 Timothy 4:1-2 The Spirit clearly says that in later times some will abandon the faith and follow deceiving spirits and things taught by demons. Such teachings come through hypocritical liars, whose consciences have been seared as with a hot iron.

2 Timothy 3:1-9 But mark this: There will be terrible times in the last days. People will be lovers of themselves, lovers of money, boastful, proud, abusive, disobedient to their parents, ungrateful, unholy, without love, unforgiving, slanderous, without self-control, brutal, not lovers of the good, treacherous, rash, conceited, lovers of pleasure rather than lovers of God – having a form of godliness but denying its power. Have nothing to do with such people. They are the kind who worm their way into homes and gain control over gullible women, who are loaded down with sins and are swayed by all kinds of evil desires, always learning but never able to come to a knowledge of the truth. Just as Jannes and Jambres opposed Moses, so also these teachers oppose the truth. They are men of depraved minds, who, as far as the faith is concerned, are rejected. But they will not get very far because, as in the case of those men, their folly will be clear to everyone.

2 Timothy 3:13 Evildoers and impostors will go from bad to worse, deceiving and being deceived.

2 Peter 2:20-22 If they have escaped the corruption of the world by knowing our Lord and Savior Jesus Christ and are again entangled in it and are overcome, they are worse off at the end than they were at the beginning. It would have been better for them not to have known the way of righteousness, than to have known it and then to turn their backs on the sacred command that was passed on to them. Of them the proverbs are true: “A dog returns to its vomit,” and, “A sow that is washed returns to her wallowing in the mud.”

Strong words and strong warnings. But for many folks they seem to be falling on deaf ears. And one of the clearest ways to discern if apostasy is breaking out in a church or Christian group is to simply note if the reigning sins of the age are being committed or defended by them.

If the sins being most championed by the world at a given time are also being celebrated, affirmed and promoted by a church body, then you likely have a major case of apostasy going on. And usually in such a situation, the best advice that can be given is to run for your lives. Leave that hell hole and have nothing to do with their iniquity and perversion.

Today the two sins most being pushed in the secular culture are homosexuality and abortion. Both have almost become sacred activities which must always be promoted and never spoken ill against. Yet we find some pastors, churches and denominations also fully promoting these abominable sins. 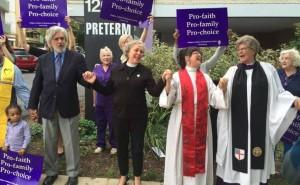 Consider this utterly mind-boggling story out of the US:

More than a dozen religious leaders from a variety of denominations gathered last week to support abortion and “bless” a Cleveland abortion facility. The “blessing” of the Preterm facility was initiated and coordinated by Rev. Laura Young, a Methodist priestess and the executive director of The Religious Coalition for Reproductive Choice’s (RCRC) Ohio chapter.
“Bless this building,” prayed Rev. Tracey Lind, Dean of Cleveland’s Trinity Episcopal Cathedral, at the abortion facility. “May its walls stand strong against the onslaught of shame thrown at it. May it be a beacon of hope for those who need its services.”
RCRC is based in Washington, D.C. Its national president, Rev. Harry Knox, participated in the Cleveland demonstration as well, and told the Columbus Dispatch, “I’m here today standing alongside my fellow clergymen and clergywomen to say, thank God for abortion providers.”
Knox is a “married” homosexual who has also spearheaded same-sex “marriage” efforts in Georgia and Florida.
The group held signs that said to be pro-abortion is to be “pro-family” and “pro-faith.” Other signs read, “Good women have abortions.”
One demonstration participant, Molly Marvar, had positive things to say about her abortion at the Cleveland Preterm clinic, calling her abortion a great, caring experience, and a privilege. “It was a defining moment for me,” she said. “It’s really important to me that I speak up about my abortion to help other women.”
“There is a reverence for life that happens in this clinic,” Marvar told Think Progress. “And the decision to get an abortion is often a really, really, spiritual decision.” In an interview with Think Progress, Young explained that she believes God supports abortion. “Women who have had abortions are being attacked at a religious level, and the faith community has a moral obligation to heal these spiritual wounds,” she said.
Young, a self-described “progressive theological thinker and a feminist,” said if her demonstration and “blessing” is successful, her group will bless other state clinics as well. She recently testified against a pro-life bill in the Ohio senate, along with Unitarian, Universalist, United Church of Christ and Episcopalian clergy.

Wow, this is such a monstrous, demonic and ungodly situation that I am almost left speechless. These folks stand completely condemned by their own mouths, and of course by the word of God. We know that God never blesses that which is evil. He can only curse it.

And these people are simply bringing curses and the just judgment of God down upon themselves. They are the perfect illustration of just what wholesale apostasy looks like. They perfectly reflect the Isaiah 5:20 which pronounces God’s judgment on those who call good evil and evil good.

Unless these folks repent, they are in a real bad way. We can pray that the satanic blinders will be removed from their eyes, and that they will see the gross error of their ways. And we can also pray that their wilful deception and promotion of all things satanic is stopped dead in its tracks.

Satan is alive and well on planet earth and we see the clearest of illustrations of this with this group. While they might be on the extreme end of deception, perversion and apostasy, bear in mind that plenty of other churches and church leaders are quickly moving down this very same path.

How many even so-called evangelical leaders and churches are pushing all things homosexual, including homosexual marriage? How many are making excuses for baby killing and attacking prolifers who seek to keep the innocent from being led to the slaughter?

While some of these Christians may not have fully gone down the path of apostasy and rebellion against God, they are certainly well on the way. And my same advice applies to them as well: we can pray for them and ask God to help free them from their deception and blindness before it is too late.

And if need be, we can pray that if they cannot or will not be improved, that they will be removed. Things are that serious: when church leaders actually lead their flock astray, then they are quickly heading into a most dangerous place indeed, where only the righteous judgment of God is the proper answer, if repentance is not forthcoming.

As Jesus said so plainly and powerfully: “If anyone causes one of these little ones–those who believe in me–to stumble, it would be better for them if a large millstone were hung around their neck and they were thrown into the sea.” (Mark 9:42)