That there would be heaps of lessons to be learned from the book of Acts should be obvious – this is after all the brand new, pristine body of believers closest to Christ and closest to the original vision of what the church should look like. If anyone knew what church should be all about, it would be these early believers.

Entire books would be needed of course to draw out all the lessons the contemporary church could/should glean from Acts. I can only offer several here, taken from my daily reading, which now obviously is in Acts. What stuck out in the early chapters were several things. 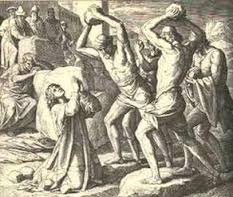 Let me mention just three of them. In Acts 7 we read about Stephen. Chapter 6 informs us of his arrest, and the next chapter features his lengthy speech and his stoning. The end part of his speech, and the furious reaction to it, are worth noting here:

“You stiff-necked people! Your hearts and ears are still uncircumcised. You are just like your ancestors: You always resist the Holy Spirit! Was there ever a prophet your ancestors did not persecute? They even killed those who predicted the coming of the Righteous One. And now you have betrayed and murdered him – you who have received the law that was given through angels but have not obeyed it.” When the members of the Sanhedrin heard this, they were furious and gnashed their teeth at him.

The notable thing here is how in the very early church there was no timidity, no men-pleasing, no attempts at seeker-sensitivity. There were just very strong, very bold, and very forceful words spoken by fearless disciples. These guys didn’t mess around. They spoke truth boldly, even if it meant getting an instant hostile reaction.

By contrast, today’s church is full of cowardly types who would never dare confront anyone, rock any boat, or speak forthrightly in the public arena. We instead have plenty of pulpits full of men pleasers who want to be known for how tolerant and accepting they are. They would never be like Stephen, and they would even condemn him if he were speaking in our churches today.

We find another example of this in Acts 8:9-25 which records the story of Simon the Sorcerer. He had just become a believer, but still was pushing his old ways, as we read in verses 18-24:

When Simon saw that the Spirit was given at the laying on of the apostles’ hands, he offered them money and said, “Give me also this ability so that everyone on whom I lay my hands may receive the Holy Spirit.” Peter answered: “May your money perish with you, because you thought you could buy the gift of God with money! You have no part or share in this ministry, because your heart is not right before God. Repent of this wickedness and pray to the Lord in the hope that he may forgive you for having such a thought in your heart. For I see that you are full of bitterness and captive to sin.” Then Simon answered, “Pray to the Lord for me so that nothing you have said may happen to me.”

Another extremely strong and confronting rebuke. No Mr Nice Guy here. No PC tolerance. No ‘we just have to love everybody’ nonsense. Very strong words were used in a very strong rebuke. This was serious business. Such sinful actions had to be dealt with firmly and immediately. And repentance was insisted upon.

But most church leaders today would also do some rebuking. Rebuking Peter that is, not Simon. They would blast him for being so unloving and unChristlike and so intolerant. They would condemn him for his harsh and judgmental attitude.

They would carry on about Simon being a new believer and how we must be so gentle and patient with him, and not rebuke him like that. They would do this because they have little or no understanding of the seriousness of sin, and the holiness of God.

Indeed, they would absolutely flip out over what took place a few chapters earlier. The instant and dire judgment of God on Ananias and Sapphira as recorded in Acts 5 would absolutely appal these contemporary Christians. Indeed, I am sure most would never even mention the episode, let alone preach on it.

But there is so much more found in the book of Acts which differs so radically from what we find in most churches today. Let me offer one final clear example of this. In Acts 9 we read about Saul’s conversion. God tells Ananias to go to where he is and lay hands on him to restore his sight.

Ananias knows all about Saul the persecutor of the church and is not too thrilled with this idea. But God insists, as we read in verses 15-16: “But the Lord said to Ananias, ‘Go! This man is my chosen instrument to proclaim my name to the Gentiles and their kings and to the people of Israel. I will show him how much he must suffer for my name’.”

You talk about having “your best life now”. You tell ’em about all the neat stuff you get when you come to Christ: a new car, a new home, a new job, a new self-image, a new outlook on life. You tell the new believer that they can be whatever they want to be, claim any promise, and even lose weight for Jesus.

But you certainly never say anything about suffering. Indeed, that is not how you fill the church and keep the money pouring in. You never discuss anything “negative” like suffering, persecution, the costs of discipleship, the need to die to self and take up your cross, and so on.

This is all wrong, and goes against all the proven church growth techniques and contemporary Christian marketing trends. Avoid difficult subjects at all cost. Never mention the hard stuff of Scripture, and simply give your people what they want to hear.

That is how “successful” churches operate. None of this old fashioned religion stuff that will turn away many. None of this legalistic stuff about holiness, obedience, discipleship, denial of self, and carrying the cross. Just give ’em what they want, and they will keep coming back for more.

Why is it that the book of Acts seems to belong to another planet? It seems to have nothing in common with so much of Western churchianity today. It looks totally alien and out of place. It is just so extreme, so radical. Can’t we just water it down a bit and keep everyone happy?

We all need to go back to the book of Acts and let it speak to us afresh today. Pastors and church leaders especially need to revisit the book, immerse themselves in it, and not leave until it produces some radical changes in their thinking and practice.

If we fail to learn about what real Christianity is from the book of Acts, we will just keep on playing church, pleasing men, and displeasing God.