This is another instalment in my irregular series on the attributes of God. I can think of no grander topic to write about than God and what he is like. Indeed, as a 20-year-old Spurgeon put it in a sermon, “The highest science, the loftiest speculation, the mightiest philosophy, which can ever engage the attention of a child of God, is the name, the nature, the person, the work, the doings, and the existence of the great God whom he calls his Father.”

By the omnipotence of God we mean this: God is all powerful. He can do all things. There is no limit to his power. His power neither increases nor diminishes. He is absolute in his reign, and without limit in his supremacy. He is God, and no one else is like him.

Wayne Grudem puts it like this: “God’s omnipotence means that God is able to do all his holy will. The word omnipotence is derived from two Latin words, omni, ‘all,’ and potens, ‘powerful,’ and means ‘all-powerful.’ Whereas God’s freedom referred to the fact that there are no external constraints on God’s decisions, God’s omnipotence has reference to his own power to do what he decides to do.” 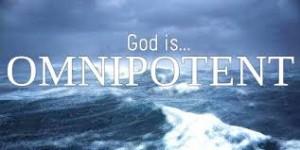 Thomas Oden puts it like this: “God’s influence on the world is unlike any other mode of influence – unlimited in capacity. Omnipotence may be defined as the perfect ability of God to do all things that are consistent with the divine character. . . . God is not limited in any of his attributes by anything external to himself. No power has any other source than God.”

The passages on this would be numerous, in addition to all the narrative portions of Scripture, be they about creation, resurrection, the miraculous, etc. Consider just a few passages on this:

-Genesis 17:1 I am God Almighty.
-Genesis 18:14 Is anything too hard for the LORD?
-1 Kings 8:27 “But will God really dwell on earth? The heavens, even the highest heaven, cannot contain you. How much less this temple I have built!
-1 Chronicles 29:11-12 Yours, Lord, is the greatness and the power
and the glory and the majesty and the splendor,
for everything in heaven and earth is yours.
Yours, Lord, is the kingdom;
you are exalted as head over all.
Wealth and honor come from you;
you are the ruler of all things.
In your hands are strength and power
to exalt and give strength to all.
-Job 23:13-14 But he stands alone, and who can oppose him?
He does whatever he pleases.
He carries out his decree against me.
-Job 42:2 I know that you can do all things;
no purpose of yours can be thwarted.
-Psalm 115:3 Our God is in heaven; he does whatever pleases him.
-Psalm 147:5 Great is our Lord, and abundant in power; his understanding is beyond measure.
-Proverbs 21:30 There is no wisdom, no insight, no plan that can succeed against the Lord.
-Isaiah 40:28 Have you not known? Have you not heard? The Lord is the everlasting God, the Creator of the ends of the earth. He does not faint or grow weary; his understanding is unsearchable.
-Jeremiah 32:27 Behold, I am the Lord, the God of all flesh. Is anything too hard for me?
-Mark 14:36 “Abba, Father,” he said, “everything is possible for you”.
-Luke 1:37 For nothing is impossible with God.
-Romans 1:20 For his invisible attributes, namely, his eternal power and divine nature, have been clearly perceived, ever since the creation of the world, in the things that have been made. So they are without excuse.

But, can God really do all things?

We need to say a bit more here, and discuss some further biblical data, as well as enter into a bit of philosophy of religion discussion. Let me look at the logical considerations first, then the biblical material on this. It is often asked in this regard, “Can God create a rock so large that even He cannot lift it?”

As Geisler and Feinberg put it, “God cannot do something which is impossible by definition. As it is impossible to make a circle square or to create another uncreated God, theists hold that it is impossible for God to make a stone that He cannot lift. Other theists explain that the problem begins with the use of a double negative: ‘If God cannot make a stone that He cannot lift, then He is not omnipotent.’ If we were to put this into logical notation, however, the statement would read: ‘Any stone which God can make, He can lift.’ Worded this way, the statement does not present any limitation to God’s power.”

Or as C.S. Lewis put it in The Problem of Pain when discussing the relationship between human free will and divine sovereignty:

His Omnipotence means power to do all that is intrinsically possible, not to do the intrinsically impossible. You may attribute miracles to Him, but not nonsense. There is no limit to His power. If you choose to say, ‘God can give a creature free will and at the same time withhold free will from it,’ you have not succeeded in saying anything about God: meaningless combinations of words do not suddenly acquire meaning simply because we prefix to them the two other words, ‘God can.’ It remains true that all things are possible with God: the intrinsic impossibilities are not things but nonentities. It is no more possible for God than for the weakest of His creatures to carry out both of two mutually exclusive alternatives; not because His power meets an obstacle, but because nonsense remains nonsense even when we talk it about God.

John Frame adds a few more such “restrictions” to what God can do. For example, another thing that God can’t do is:

Actions appropriate only to finite creatures, such as buying shoes, celebrating his birthday, or taking medicine for a cough. Again, God’s inability to do these things is not due to any lack of power. Remember, however, that God is quite capable of taking on human form and doing all these things. His “inability” exists only in his disincarnate existence.

So God cannot do that which is logically impossible. No one can. He cannot make 2 + 2 = 5. He cannot make true that which is false. That is because God’s character and moral nature are unchangeable. So he can never lie, tell a falsehood, or engage in logical absurdities or contradictions.

But let me now turn to some biblical evidence on this. The Bible very clearly states that there are certain things which God cannot do. Consider some of these:

-Numbers 23:19 God is not a man, that he should lie, nor a son of man, that he should change his mind. Does he speak and then not act? Does he promise and not fulfill?
-1 Samuel 15:29 He who is the Glory of Israel does not lie or change his mind; for he is not a man, that he should change his mind.”
-2 Timothy 2:13 If we are faithless, he will remain faithful, for he cannot disown himself.
-Hebrews 6:18 God did this so that, by two unchangeable things in which it is impossible for God to lie, we who have fled to take hold of the hope offered to us may be greatly encouraged.
-James 1:13 When tempted, no one should say, “God is tempting me.” For God cannot be tempted by evil, nor does he tempt anyone;
-James 1:17 Every good and perfect gift is from above, coming down from the Father of the heavenly lights, who does not change like shifting shadows.

As can be seen, these mainly have to do with his character. So are these real limitations? Do they mean God is not omnipotent? Not really – it just depends on how we define the terms. If we mean that God can do all things that are doable (that is, are not logically contradictory, etc.), then we can say yes, he is all powerful.

2 Replies to “The Omnipotence of God”