What happened in Cologne and other European cities recently was not accidental, was not unique, and was not unexpected. As I wrote earlier, this is all about rape jihad, a quite acceptable modus operandi for the political ideology known as Islam: https://billmuehlenberg.com/2016/01/11/islam-and-rape-jihad/

And now as more details emerge about these horrific sexual assaults on Western women by mass gangs of foreigners, we have to add another Arabic word to our vocabulary: taharrush. It is even seen as a bit of a game by those doing it, so a related term is needed here: taharrush gamea.

Both have to do with large groups of men encircling women and sexually assaulting them. While this had happened in Islamic countries previously, it seems it is now being imported into Europe and the West thanks to appallingly bad immigration policies and Western cluelessness as to the real nature of Islam and its views about women.

So bad is it that even some of the mainstream media is being forced to report on this. Consider one newspaper article on this issue: 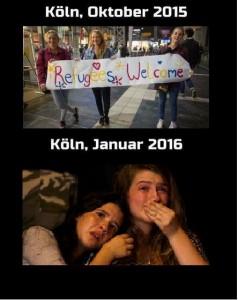 Police fear a gang-rape phenomenon known as ‘taharrush gamea’ in the Arab world and seen in attacks on women across German cities at the New Year has now spread to Europe. The name of the practice translates to ‘collective harassment’ and is carried out by large groups of men who sexually assault lone women, either by groping, or in some instances, raping them.
The men first surround their victim in circles. Some then sexually assault her, while others not directly involved watch or divert outsiders’ attention to what is occurring. Sometimes the terrified victim – in a state of shock and unable to respond – is also robbed during the ordeal. And the attack usually goes unpunished because the large number of perpetrators and chaos of the attack means authorities are unable to identify those involved.
There remains debate about what defines ‘taharrush’ – some still insist it is a reference to flirting – though scholars argue its definition changed after the attacks seen in Egypt from 2011 onwards. German authorities have stated this was the phenomenon seen in Cologne city centre on New Year, when hundreds of women reported they were sexually assaulted.
The practice is only carried out in public and almost always at demonstrations or large public gatherings where the attackers find safety in numbers and disorder. The Arab phenomenon first came to the attention of the Western world when South African reporter Lara Logan, working for CBS, was set upon by a large group of men while reporting on celebrations in Tahrir Square, Egypt, in 2011.
Logan recounted her ordeal in Egypt several months later on a 60 Minutes broadcast, describing how the baying crowd ‘raped me with their hands’. The 44-year-old revealed terrifying details of the 40 minute-long February attack in Cairo’s Tahrir Square, including how she became separated from members of her crew after someone in the frenzied 200-strong crowd shouted ‘Let’s take her pants off.’
She said: ‘Suddenly, before I even know what’s happening, I feel hands grabbing my breasts, grabbing my crotch, grabbing me from behind. I mean, and it’s not one person and then it stops, it’s like one person and another person and another person. And I know Ray is right there, and he’s grabbing at me and screaming, “Lara hold onto me, hold onto me”.’

Another article adds more detail to this grisly new “sport”:

Following the mass sexual assault in Cologne on New Year’s Eve, German authorities are talking about the phenomenon of ‘Taharrush‘ — where large gangs of men attack and even rape women during major events.
Taharrush has so far been confined to the Arab world, but with the huge migrant influx last year, authorities are now concerned the Cologne attacks could be the first example in Europe.
The Federal Criminal Police (BKA) told Welt am Sonntag that they are looking at how some Arab countries deal with mass sexual assaults amid fears similar attacks could happen again at other large gatherings in the country.
“Such crimes, committed by groups of young men, are of particular concern to local police during large gatherings of people such as demonstrations,” a BKA spokesman said. “The attacks range from sexual harassment to rape.”
Many of the men arrested so far have been described as of North African origin. Online journal Jadaliyya writes that taharrush is a particular problem in one North African nation, Egypt: “In Egypt, sexual harassment is widespread and touches the lives of the majority of women whether on the streets, in public transportation, or at the work place, the super market, or political protests,” the journal writes.
It adds that the word taharrush is a relatively new term, with sexual assault previously being known simply as mu’aksa, or ‘flirtation’. Wearing a veil also seems to offer no protection for women, with Jadaliyya reporting that large groups of men attacked both veiled and unveiled women during holiday festivities following Ramadan in 2006.

And of course because of damnable political correctness, increasing Islamophilia, moronic multiculturalism, and a dhimmified Western leadership, police are basically hamstrung from doing anything about all this. Consider these absolutely shocking words from one German officer willing to spill the beans:

A German police officer told media that law enforcement cannot efficiently tackle crime among refugees without being accused of excessive violence or racism, while many dangerous incidents are played down or kept secret to maintain desirable statistics. The federal police officer, referred to as Bernd K., has shared his experiences with Bild newspaper, having worked for six months at Munich train station and also in the “refugee hotspots” of Passau and Freilassing in Bavaria.
“At first, mostly families with children – who looked educated and spoke English – were coming here,” the officer told. “Meanwhile, 95 percent of refugees are now single men.” People do not know what happens in reality, even when it comes to violence or physical abuse, as the general picture looks softened, he continued.
“One asylum seeker wanted to cut his fellow’s throat. But the crime scene report included only severe injuries rather than murder attempt. This looks better for the statistics” Bernd K. explained. In his view, the crime rate among refugees far exceeds that of the local population: “For the last couple of months, I had only one criminal charge against a German, the rest [of suspects] were only refugees.”
Referring to abuse and harassment against women, similar to those that took place in Cologne on New Year’s Eve, the officer said such cases are widespread in Bavaria as well. “At the train station, women are sexually harassed and offended on regular basis. When we speak of an entry ban [to the area], they would shout on us: ‘You are not my police. You are a racist’.”
However, when a refugee needs to be controlled, the police cannot arrest him even for a while, the officer said, citing “superior orders” prescribing not to use coercive actions. “Our domestic rule is – better to let him run away.”
German law enforcement needs to impose stricter control on perpetrators as well as more police officers and more independence from political agenda, the officer went on. “Otherwise it will turn into a big bang someday, if it’s not there already,” he concluded.

Yep, this is a terrific way to commit national suicide. The white flag of surrender has already gone up, and far too many of our Western leaders have decided that they prefer siding with our enemies instead of protecting their own citizens. Gotta love how the lefties operate.

Let me finish with the wise words of Dennis Prager:

Since the scores of New Year’s Eve sexual attacks on German women by hundreds of men identified as Arab or North African, the left in Germany has faced a dilemma: which to fight for first — women’s human rights or multiculturalism?
This was the same dilemma that faced British authorities between 1997 and 2013. During those six years at least 1,400 girls from the age of 11 in just one English city (Rotherham, population 275,000) were raped by gangs of men, nearly all of whom were immigrants (mostly from Pakistan) or their sons.
But British authorities kept silent. Why? In 2014, the reason finally was revealed: The perpetrators were Muslim, and British authorities were therefore afraid to publicize — or often even investigate — the crimes. They feared being branded Islamophobic and racist. Politicians on the left and right acknowledged this fact….
All the isms of the left — multiculturalism, feminism, environmentalism, socialism, Marxism, egalitarianism — distort the individual’s and society’s moral compass. But, as the minister’s comments make clear, none do so more than the left’s loathing of conservatives and conservative values.
As with multiculturalism, a left-wing priority — in this case destroying the right — has distorted the left’s moral compass. How could anyone in his right mind write that right-wing platforms and chat rooms are “at least as awful” as women being sexually attacked and even raped by gangs of men? The answer is that you cannot be in your right mind; you have to be in your left mind.

7 Replies to “Taharrush, Refugees, and the Rape of the West”