The omnipresence, or immensity, of God is another amazing divine attribute worth considering. On the one hand it can be rather straightforward to understand. Simply put, God is unlimited in relation to space. He is present everywhere and in all things (we sometimes use the term ubiquitous, meaning everywhere simultaneously). God is not circumscribed or bound by place.

Some of the biblical passages we can mention here include:

1 Kings 8:27 But will God really dwell on earth? The heavens, even the highest heaven, cannot contain you. How much less this temple I have built!

Psalm 139:7-10 Where can I go from your Spirit? Where can I flee from your presence? If I go up to the heavens, you are there; if I make my bed in the depths, you are there. If I rise on the wings of the dawn, if I settle on the far side of the sea, even there your hand will guide me, your right hand will hold me fast.

Proverbs 15:3 The eyes of the LORD are everywhere, keeping watch on the wicked and the good. 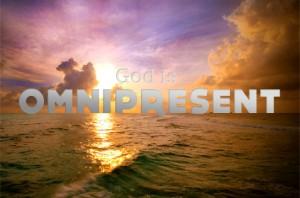 Yet we need to tease all this out a bit further. We are not to think of God purely in spatial terms. God is a spirit, not a corporal being, and he is not bound to, or contained in, any one place. God is not to be identified with the universe, as in pantheism and Eastern thought. The universe is not God’s body nor an extension of it. Indeed, God has no body (apart from the incarnation).

As Michael Bird puts it, “Unlike pantheism, which proposes that God lives in everything, the biblical testimony is that God exists everywhere in creation while remaining distinct from creation.” God transcends space. He is the creator of space, as he is the creator of time.

Indeed, this can be a difficult doctrine in other related ways. If God is immaterial, how can he dwell in any space? And how can it be said he does not reside with the wicked, if he is everywhere? And if God created both time and space, was he omnipresent prior to creation?

Consider for example a passage such as Genesis 4:16: “So Cain went out from the Lord’s presence and lived in the land of Nod, east of Eden.” And what about hell? Is hell a place? Does God dwell there? The way to seek to deal with this is to assert that God is always present, but in different ways, eg., ontologically, morally, relationally, etc.

Genesis 39:20-21 Joseph’s master took him and put him in prison, the place where the king’s prisoners were confined. But while Joseph was there in the prison, the Lord was with him; he showed him kindness and granted him favor in the eyes of the prison warden.

Psalm 34:18 The LORD is close to the brokenhearted and saves those who are crushed in spirit.

Isaiah 57:15 For this is what the high and exalted One says –
he who lives forever, whose name is holy:
“I live in a high and holy place,
but also with the one who is contrite and lowly in spirit,
to revive the spirit of the lowly
and to revive the heart of the contrite.”

But the wicked and those who do not love God are said to be outside of God’s presence, or far from his presence, and hell is sometimes described as being outside of the presence of God. Plenty of passages speak to his farness from sinners and unbelievers:

Leviticus 22:3 Say to them: ‘For the generations to come, if any of your descendants is ceremonially unclean and yet comes near the sacred offerings that the Israelites consecrate to the LORD, that person must be cut off from my presence. I am the LORD.’

Numbers 14:42-43 Do not go up, because the LORD is not with you. You will be defeated by your enemies, for the Amalekites and Canaanites will face you there. Because you have turned away from the LORD, he will not be with you and you will fall by the sword.

Deuteronomy 31:17-18 On that day I will become angry with them and forsake them; I will hide my face from them, and they will be destroyed. Many disasters and difficulties will come upon them, and on that day they will ask, ‘Have not these disasters come upon us because our God is not with us?’ And I will certainly hide my face on that day because of all their wickedness in turning to other gods.

Psalm 5:5 The arrogant cannot stand in your presence; you hate all who do wrong.

Psalm 101:7 No one who practices deceit will dwell in my house; no one who speaks falsely will stand in my presence.

Proverbs 15:29 The LORD is far from the wicked: but he hears the prayer of the righteous.

Isaiah 55:6 Seek the Lord while he may be found; call on him while he is near.

Jeremiah 23:39 Therefore, behold, I, even I, will utterly forget you, and I will forsake you, and the city that I gave you and your fathers, and cast you out of my presence.

So how are we to reconcile all this? As I mentioned, we must speak of the presence of God in more than one way. Yes, God is everywhere, but he is near to his own in a special way, and far from those who are not his own. Let me try to tackle this in a bit more detail.

Many of the passages just cited above refer to a relational and/or redemptive presence of God. Our moral and spiritual condition in a sense determines to what extent God is present with us – or absent from us. A new book by J. Ryan Lister, The Presence of God (Crossway, 2015), is quite helpful here, so let me draw upon it for a moment. Concerning God’s relational presence with people, the Fall of course broke that close and continuous presence and now we have a mediated and indirect access to God at best:

God’s presence after Adam’s transgression is best understood as an agent of redemption rather than pure relationship. With this shift in function, there is a shift in the overall experience of God’s presence. Sin separates the unrighteous from the righteous, and the relationship that was once free and unrestricted prior to the fall now demands mediation. We see repeatedly in Scripture that the Lord shrouds his presence in symbol, image, and/or physical barriers because of his holiness and for the protection of humanity. Bavinck explains that the mediated presence of God, particularly in the Old Testament,

“does not exhaustively coincide with his being. It does indeed furnish true and reliable knowledge of God, but not a knowledge that exhaustively corresponds to his being. The stone at Bethel, the pillar of cloud and the pillar of fire in the wilderness, the thunder on Mount Sinai, the clouds in the tabernacle, the ark of the covenant (etc.) are signs and pledges of his presence, but do not encompass and confine him. Moses, with whom God spoke as with a friend, only saw God after he had passed by him (Ex. 33:23). One cannot see God and live (Ex. 33:20; Lev. 16:2). He is without form (Deut. 4:12, 15). One cannot make an image of him (Ex. 20:4). He dwells in darkness: clouds and darkness are the signs of his presence (Ex. 20:21; Deut. 4:11; 5:22; 1 Kings 8:12; 2 Chron. 6:1).”

Much more of course should be said about this aspect of the discussion, but let me close with the puzzling notion of God and hell. Is he there or is he not there? Two verses seem to cancel each other out on this matter:

-2 Thessalonians 1:9 They will suffer the punishment of eternal destruction, away from the presence of the Lord and from the glory of his might.

John Piper has a helpful discussion on all this:

These are not contradictory descriptions. The first text describes the presence and power of the Lord as glorious in the sense of being thrilling to the souls of the saints. As the next verse says, “He comes on that day to be glorified in his saints, and to be marveled at among all who have believed” (2 Thessalonians 1:10). Unbelievers will be excluded from this experience. Christ will not be beautiful or marvelous to them.
The second text simply says the angels and the Lamb will be attending this punishment. They will be present. They “will be tormented in the presence of the holy angels and in the presence of the Lamb” (Revelation 14:10). Their presence is not for enjoyment but for vindication.
God considers it right and suitable that those who rejected Christ see him triumphant, pure, and justified over all who considered him unworthy of their trust. The focus in Revelation 14:10 is not that those in hell have the privilege of seeing what they enjoy, but that they have the remorse of seeing what they rejected.
And – perhaps the deepest sting – they know he sees them.
“Christians who suffered for their faith did so in the presence of crowds of onlookers. Ultimately their tormentors will be punished in the presence of more august spectators ‘in keeping with many other scenes of this book where the deepest sting that bitter conscience is dealt is that it must suffer while utter purity is looking on.” (R. V. G. Tasker, Revelation, p. 181)

And if we take some different translations of Psalm 139 mentioned above, we find a quick answer to this question anyway, as in the ESV rendering of verse 8: “If I ascend to heaven, you are there! If I make my bed in Sheol, you are there!”

So much more needs to be said on this broad topic of God’s omnipresence. But let me finish with a pastoral application of all this, as expressed so very well by Michael Horton:

The question of God’s presence and absence in the covenantal drama is equivalent to the question of salvation and judgment. In other words, we meet in Scripture both an ontological omnipresence and a covenantal-judicial presence in blessing or wrath. Of course, God is omnipresent in his essence, but the primary question in the covenantal drama is whether God is present for us, and if so, where, as well as whether he is present in judgment or in grace. Can we stand in his presence? Can we withstand his appearing?