We are seeing a lot of death, carnage and destruction in Europe and other parts of the West at the moment. You can put this down to two main causes: a resurgent and demonic Islam, and a demoralised and PC West. Both feed off each other. When Western nations play down their Judeo-Christian past and values, and pretend that all cultures are equal, they quickly find that at least one culture (political Islam) is far more equal.

A West that no longer believes in itself and in anything worthwhile, implementing failed multiculturalism policies, is simply no match for a hard-core belief system that sees the West as the enemy, relativism as a joke, and accommodation as weakness. 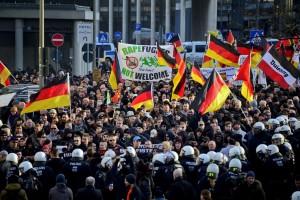 Thus each new day we are witnessing more horrific outrages, such as the recent mass sexual assaults in Cologne and elsewhere. Whether we find bloodied bodies on the streets of London, Paris or Madrid, the West in its current demoralised and relativised condition is just no match for Islam’s true believers.

Even if Islam did not exist, we would have to question the feasibility of multi culti principles and policies. But with IS and other devout Muslim groups increasingly doing their thing unhindered in Europe and beyond, we now have to shake off our ideological stupor and face reality.

And that reality is this: multiculturalism kills. Almost daily we see people being killed on our streets because of this flawed and reckless policy, one which is fully being taken advantage of by the religion of peace. Indeed, around five years ago it looked like Europe might be waking up to this reality.

Back then various leaders, even including Germany’s Angela Merkel, spoke about the failure of multiculturalism. I wrote about that here at the time: billmuehlenberg.com/2011/02/13/the-death-of-multiculturalism/

But it seems these leaders have not learned their lessons, nor heeded their own advice, as things have simply spiralled out of control in the last half decade, with Merkel being among the biggest culprits here. Many voices have been warning, and continue to warn, about the failure and the dangers of multiculturalism. Let me share a few of them, both past and present.

English conservative Roger Scruton wrote about this when the leaders seemed to be waking up five, six years ago:

So what happens when people whose identity is fixed by creed or kinship immigrate into places settled by Western culture? The multiculturalists say that we must make room for them, and that we do this by relinquishing the space in which their culture can flourish. Our political class has at last recognized that this is a recipe for disaster, and that we can welcome immigrants only if we welcome them into our culture, and not beside and against it. But that means telling them to accept rules, customs, and procedures that may be alien to their old way of life. Is this an injustice? Surely not. If immigrants come it is because they gain by doing so. It is therefore reasonable to remind them that there is also a cost. Only now, however, is our political class prepared to say so, and to insist that the cost be paid. And it may be that this change of heart comes too late.

What is being brought home to us, through painful experiences that we might have avoided had it been permitted before now to say the truth, is that we, like everyone else, depend upon a shared culture for our security, our prosperity and our freedom to be. We don’t require everyone to have the same faith, to lead the same kind of family life or to participate in the same festivals. But we have a shared civic culture, a shared language and a shared public sphere. Our societies are built upon the Judeo-Christian ideal of neighbour-love, according to which strangers and intimates deserve equal concern.

In his very important 2012 volume Christianity, Islam and Atheism, William Kilpatrick put it this way:

In America, multiculturalism is a widely held creed, whose promotion has become the chief mission of our schools. In most European countries, multiculturalism is an official state policy, and deviation from it might land you in jail….
Why doesn’t multiculturalism work? The answer is that multiculturalism is essentially a form of relativism in which morality is relative to culture. The corresponding belief is that the members of one culture have no right to make judgments about the rightness or wrongness of another culture’s traditions or practices….
Because of its inherent divisiveness, the multiculturalist model would eventually fail in any society. But it is particularly fatal to a society that has in its midst an aggressive cultural group that refuses to subscribe to relativism. By neglecting to stand up for their own values, traditions, and religious heritage – indeed, by denigrating them – European countries left themselves almost defenceless against a resurgent Islam. Islam’s success in Europe has been built in large part on European self-doubt.

Two days ago Jennifer Oriel wrote about Cologne and the tragedy of multiculturalism. She said in part:

The horrific assaults of women across Europe on New Year’s Eve are a consequence of malformed multicultural policy that promotes cultural relativism over empirical reality, the denigration of Western culture in favour of all others and the disavowal of differences between world civilisations. The solution to cultural differences is posited as political; open the borders and they will come, offer social democracy and they will -integrate, teach Enlightenment and liberalism will flourish. Never have idealists set so much stock in a single policy than socialist and liberal internationalists have placed in the promise of multiculturalism to enlighten humanity.
The rise of jihadism as a European condition threatened the multicultural ideal, but the mass violence on New Year’s Eve committed by asylum-seekers welcomed through open borders has shattered the dream. Political leaders must reckon with reality if cultural plurality is to survive the aftershock….
German Chancellor Angela Merkel counts among Europe’s most outspoken advocates of multicultural and open border policy. She refused to correct her stance on porous borders despite evidence that Islamic State was exploiting it to import jihadists into Europe, some of whom were implicated in the Black Friday terrorist attacks on Paris. Along with other European Union elites, Merkel has reprimanded heads of state who reject open border policy such as Hungary’s Viktor Orban. It is not the first time Merkel has conducted a high risk experiment in social policy and failed. In 2010, she was forced to admit error in her uncritical acceptance of multiculturalism as an ideal and policy of the state. Yet her pragmatic correction soon gave way to unbridled optimism on open borders….
The ideological origin of multicultural policy in Marxism and cultural relativism makes open borders seem a natural corollary of social progress. It has taken a decade of conservative criticism to burst the bubble. Former prime minister John Howard stated in 2005 that “if people are not willing to give their first loyalty to this country, they obviously must understand that that will arouse enormous concern within the rest of the Australian community”. Tony Abbott echoed the theme, encouraging social integration by educating Australians about the social, cultural and economic benefits of Western civilisation’s core values. But it was British Prime Minister David Cameron who made the critical distinction required to salvage open societies from the wreckage of cultural relativism, criticising continued advocacy of “state multiculturalism” in the context of Islamism and terrorism.
Only a few months ago, EU leaders were defending open border policy as the zenith of multiculturalism. Blinded by faith, they ignored reality as Islamists made their way into Europe, unleashing jihadism against its citizens.

And just today Brendan O’Neill had a terrific article looking at recent events and the abysmal failure of multiculturalism. He begins:

In the fallout from the New Year’s Eve crime spree in Cologne, when numerous women were allegedly robbed and molested by men recently arrived from Syria and other Arab countries, most of the political focus and media fury have been aimed at ‘their culture’. At the problem of Muslim men’s allegedly ingrained disrespect for women. At the fundamental conflict between their Koran-derived way of thinking and Europe’s women-friendly, gay-friendly, largely liberal outlook. As one observer put it, Cologne shows that the culture of these men is simply ‘not compatible with European norms’.
All this handwringing over ‘their culture’ is strange. Not because we shouldn’t criticise other cultures – I’m all in favour of that – or because we shouldn’t chastise and punish the men accused of committing crimes in Cologne. No, it’s weird because what the Cologne fallout most graphically exposes is the rot and disarray and dishonesty of our culture. Of 21st-century Europe. Of nations, like Germany, which claim to be liberal and enlightened but which in fact now exist under a creed of sheepish, silencing multiculturalism which puts more store by lies that might help to pacify mass society than by truths that might open up real and, yes, difficult debate.

He concludes his piece with these words:

But more fundamentally, the moral silencing wrought by multiculturalism is about suppressing politics itself, in politics’ truest sense of being a free, frank, conflictual discussion about values and the future. Multiculturalism is best understood as the sacralisation of moral and cultural relativism. It makes a virtue of the vacuum in the heart of the modern West, through dressing up the West’s inability to articulate what it is for and its failure to stand up for the values of Enlightenment by instead saying, ‘All cultures are equally valid’. Multiculturalism is the PC sexing-up of modern Western society’s profound alienation from its own culture, from its 300-year-old traditions of democracy, reason, growth and an aspiration, at least, to freedom, though that has been frequently thwarted. As such, the core instinct of multiculturalism, its driving force in fact, is to shush and stifle, to elevate self-censorship and denial of difficult reality over the volatility of allowing open discussion and, worse, a judgement of and between values.

Exactly right. We have seen plenty of denial and delusion here. And when that results in people being raped and killed then it is time to wake up and start challenging the failed status quo.