You know the pro-aborts are getting pretty desperate when they start launching lawsuits against prolifers. But any group that kills babies for a living and makes money off it has got to be fairly desperate to begin with. The guilt alone that these guys have to deal with must be off the charts.

So to try to justify the horrendous evil they are involved in, they lash out at all those who dare to shed some light on their sinister activities. As part of the ugly secular left, they specialise in bullying and intimidation, seeking to shut down and shut up anyone who dares to challenge their demonic agenda.

So if a group gets a bit too close to the truth, and lets the whole world know about it, the baby killers will spring into action and seek to sue the pants off them. This just happened with the world’s largest abortion provider, Planned Parenthood. 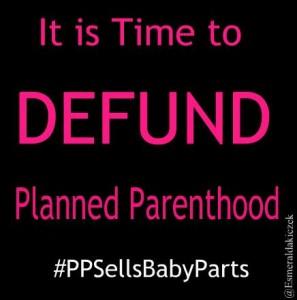 The very successful video sting of this sordid outfit that emerged last year, which revealed a roaring trade in dead baby parts – among other things – has obviously got them all shook up. So now they have taken the prolife group to the courts. As one write-up tells the story:

Planned Parenthood has been threatening this for months, but today they made it official by filing suit against the Center for Medical Progress, the group that caught them on video repeatedly admitting that they sold aborted baby parts. Democrats responded to the videos by pretending shock at the idea that video could be edited, even though CMP also released the full, unedited video concurrent with each release of a produced video.
They have since resorted to calling the videos “discredited” even though no one has discredited them at all, and even though they clearly show Planned Parenthood employees in their own words discussing the sale of aborted fetal tissue.
What’s interesting is that Planned Parenthood has NOT sued CMP for slander or libel, which is to say, they are not claiming (as far as I can tell) that anything in the videos is actually false. They are merely claiming that the recordings were obtained in violation of applicable State and Federal privacy laws. In other words, Planned Parenthood does not deny that they sold (and continue to sell) baby parts, they just object to how CMP went about proving that fact.

The videos have been out for a while. So why the action now? This is all about money of course. PP is worried sick that if Hillary Clinton does not get in as President, but a conservative Republican does instead, it will lose all those kazillions of tax dollars. As Lila Rose, President of Live Action, said:

Funded with billions of our tax dollars, Planned Parenthood has shamelessly announced today that it is suing a brave young activist and some of his friends. Today’s announcement shows that Planned Parenthood is desperate, knowing that its taxpayer funding may disappear with a new president. Just as it crushes the bodies of preborn children in its facilities, Planned Parenthood is now seeking to crush any dissent towards its crimes against humanity.

Getting Hillary into the White House is exactly what PP wants. As she said recently, “I’m obviously not only against defunding Planned Parenthood, but I would like to see Planned Parenthood even get more funding because oftentimes it is both the first and the last resort for healthcare.”

Yeah right, killing babies is healthcare. But it is all quid pro quo tuff. Hil wants to give PP more taxpayer money, and PP endorses Hil for POTUS. But that may backfire, as one report writes:

And the PP lawsuit may not go over so well either, as the Alliance Defending Freedom has just come out and said. The ADF offer five main problems with the PP lawsuit:

1. The videos have been authenticated and are available in their entirety online.
2. Taking hours of video and condensing it into digestible snippets is not illegal.
3. Planned Parenthood has admitted to taking money for “fetal tissue.”
4. The undercover videos focus on the apparent illegal sale of baby parts and illegal abortion practices, not abortion access.
5. The last time the abortion industry went after pro-lifers under RICO, it lost two Supreme Court cases.

Planned Parenthood claims that they filed this lawsuit to protect women, but they are only concerned with their own image and their bottom line. And for good reason. Just this week, Kansas became the 8th state to defund the abortion giant, and this month we were the closest we’ve ever been to defunding them at the federal level after an historic vote by Congress.
The momentum is staunchly in the pro-life corner, and with the March for Life next week, the lawsuit is likely a last-ditch attempt to turn the tide. Unfortunately for them, millions of Americans have viewed the undercover footage. And such grotesque disregard for life simply can’t be unseen.

Gary DeMar cuts to the chase in this whole sordid affair by reminding us of what is really going on here:

The Nazis had been threatening to file suit against clandestine Jews who filmed what was going on in the Nazi death camps. They resorted to calling the films “discredited” even though no one has discredited them at all, and even though they clearly show the Nazi regime discussing how Jews were being systematically exterminated as part of a “final solution.”

DeMar of course simply slightly edited the first article I quoted from, and that is exactly the sort of thing going on here. Says DeMar, “Don’t say ‘It can’t happen here’ and ‘Never Again.’ It’s happening here and now. Only the subjects, perpetrators, and enablers have changed.”

Yep, there is plenty of common ground between the Nazis and PP. Both are diabolically evil killing machines. Indeed, in addition to all its wickedness on the abortion front, PP is evil on so many other fronts, including its recent claim that hiding HIV from sexual partners is your ‘right’.

PP should have been put out of its misery long ago. It certainly does not deserve a penny of taxpayer funding. Let it sue everyone – that will simply expose more ugly truth about this really ugly group.