In an age of rampant biblical illiteracy (especially among Christians) the restatement of basic biblical truths becomes imperative. And if you happen to be in the book of Exodus right now (as part of reading through the entire Bible in a year) you will find many such themes: the salvation of God, the justice of God, the wrath of God, and so on.

We certainly find all this aplenty in the amazing Exodus narrative which occupies the first 15 chapters of the book. God’s people are oppressed but not forgotten by God, and are miraculously delivered out of Egyptian bondage, with their enemies getting their just deserts. 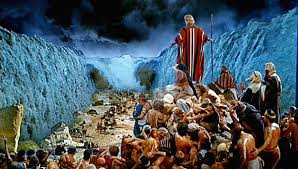 And all this is climaxed by songs of praise in chapter 15. The song of Moses exalts Yahweh for both rescuing Israel as well as defeating their (and his) enemies. The people rejoice and sing praise to God for his mighty acts of deliverance, which are simultaneously acts of glorious salvation (for Israel) and acts of wholesale judgment (on Egypt).

This is all done – as all things should be done – for the glory of God. Indeed twice in Ex. 14 (the chapter detailing the Red Sea crossing), we read this very thing:

Ex. 14:4 And I will harden Pharaoh’s heart, and he will pursue them. But I will gain glory for myself through Pharaoh and all his army, and the Egyptians will know that I am the LORD.” So the Israelites did this.

Something similar will happen at the final judgment. Evil men will be destroyed, and God will be glorified. Revelation 18 tells how the city of Satan will be cast into the sea (v. 21a). This will be for the glory of God, because immediately afterward, the saints will sing a hallelujah chorus: “Hallelujah! Salvation and glory and power belong to our God, for true and just are his judgments” (Rev. 19:1b, 2a). God deserves our praise because he will do justice in the end.
God was doing something more than judging the Egyptians, however, he was also saving the Israelites, and this too was for his glory….

The real climax to this amazing story comes in Ex. 15 with the Song of Moses (along with the Song of Miriam). This is one long praise and worship session, directed at Yahweh specifically because of the Red Sea miracle. Both deliverance and judgment are the objects of praise to God. Let me offer just the first six verses:

“I will sing to the Lord,
for he is highly exalted.
Both horse and driver
he has hurled into the sea.
“The Lord is my strength and my defense;
he has become my salvation.
He is my God, and I will praise him,
my father’s God, and I will exalt him.
The Lord is a warrior;
the Lord is his name.
Pharaoh’s chariots and his army
he has hurled into the sea.
The best of Pharaoh’s officers
are drowned in the Red Sea.
The deep waters have covered them;
they sank to the depths like a stone.
Your right hand, Lord,
was majestic in power.
Your right hand, Lord,
shattered the enemy.

Can God’s people rejoice in the destruction of evil and the judgment on the wicked? You bet they can. They do it here with divine gusto. Indeed, it becomes the stuff of later biblical praise. Consider Psalm 106:7-12 for example:

When our ancestors were in Egypt,
they gave no thought to your miracles;
they did not remember your many kindnesses,
and they rebelled by the sea, the Red Sea.
Yet he saved them for his name’s sake,
to make his mighty power known.
He rebuked the Red Sea, and it dried up;
he led them through the depths as through a desert.
He saved them from the hand of the foe;
from the hand of the enemy he redeemed them.
The waters covered their adversaries;
not one of them survived.
Then they believed his promises
and sang his praise.

And lest you think this is not appropriate for New Testament times, think again. The song is referred to there as well. Indeed, at the climax of human history it is appealed to. As we find in Revelation 15:1-4:

I saw in heaven another great and marvelous sign: seven angels with the seven last plagues – last, because with them God’s wrath is completed. And I saw what looked like a sea of glass glowing with fire and, standing beside the sea, those who had been victorious over the beast and its image and over the number of its name. They held harps given them by God and sang the song of God’s servant Moses and of the Lamb:
“Great and marvelous are your deeds,
Lord God Almighty.
Just and true are your ways,
King of the nations.
Who will not fear you, Lord,
and bring glory to your name?
For you alone are holy.
All nations will come
and worship before you,
for your righteous acts have been revealed.”

I have written before how it is fully appropriate to praise God not only for his deliverance and salvation, but for the just judgment of our/his enemies. Divine vindication is something to worship God for, not shrink away from. See here for example: billmuehlenberg.com/2014/09/05/jesus-justice-and-vindication/

The Exodus is a grand paradigm of salvation and judgment. As Peter Enns comments,

The Exodus theme in the New Testament reaches its final stage in the book of Revelation. The coming of Christ, the new Moses, and the deliverance he has achieved for his people through his death and resurrection are in actuality the first stage of a two-stage process. The final stage of the Exodus journey will take place at his second coming. Revelation speaks a great deal about the destruction of “Babylon.” This is certainly not meant to represent any one city, much less the literal city of Babylon, but the present world order as a whole. The status that Egypt achieved in the Old Testament as the ultimate symbol of worldly opposition to God was supplanted during the postexilic and intertestamental period by Babylon….
In the end, Babylon will, like Pharaoh and his army before them, meet a violent end, like a huge millstone thrown “into the sea” (Rev. 18:21). Babylon will meet a watery death, in symbolic term, and the final Exodus will be complete.

And after this final judgment of God, we find the same praise and worship session kicking in as we did after the first Exodus. The horrible judgment found in Rev. 18 is immediately followed in chapter 19 by a threefold hallelujah over Babylon’s fall. It begins this way (vv. 1-3):

After this I heard what sounded like the roar of a great multitude in heaven shouting:
“Hallelujah!
Salvation and glory and power belong to our God,
for true and just are his judgments.
He has condemned the great prostitute
who corrupted the earth by her adulteries.
He has avenged on her the blood of his servants.”
And again they shouted:
“Hallelujah!
The smoke from her goes up for ever and ever.”

Like the Song of Moses, this is another victory hymn, another song of praise to God who judges his enemies and offers his people vindication. As Douglas Stuart says of the original song:

The song must have been instantly popular, judging from Miriam’s decision to teach it to the Israelite women. One can imagine groups of Israelites singing the song often on the way to Mount Sinai…. So important did the song become to all generations of believers that it is described in John’s great apocalyptic vision as a song to be sung even in heaven (Rev 15:3). In form the song is a victory hymn, a song sung to and about God in praise of his granting victory to his people over their foes.

Whether it was the oppressed Israelites, those suffering greatly at the end of time, or all those in between who have been persecuted and killed for their faith (think of all the Christians right now suffering at the hands of IS), there will be deliverance and victory, and the enemies of God will be judged.

And as always, this is something to praise God for, and to enter into glorious worship about. Right now the enemies of God (which we all are by nature) have a period of grace to turn from their sin and rebellion, and get right with God through Christ. But for those who insist on shaking their fists at God and spurning his offers of redemption, there is only the just wrath of God that will remain.

We can and should praise God for both: the sinner who turns and repents, finding wonderful salvation, and the sinner who remains hardened in sin, receiving the just payback for his defiance and rebellion. Either way, God is glorified, and his people rejoice.