The main difficulty with this passage is that it is another text which has been utterly mangled by those who seem to delight in twisting God’s word for their own (often evil) ends. The ability of people to distort and manipulate Scripture for their own purposes knows no bounds. Add some satanic deception to this and we have a recipe for biblical anarchy.

The cults of course love to twist Scripture and distort biblical truth, but so do all sorts of other folks, including carnal and compromised Christians. Instead of reading the word of God and understanding it in its plain sense – as is mostly determined by context – they will read into it their own spin on things.

As I have menti 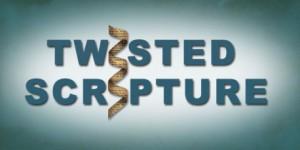 oned before, the goal of all believers in studying Scripture is to engage in exegesis (seeking to determine what the author meant by a text). But so often this is replaced by eisegesis (reading into a text your own preferred version of events). When a verse is so twisted and so distorted to serve evil ends, then you know that not just horrible hermeneutics but diabolical deception is at work.

But I better mention what the verse in fact says: “Above all, love each other deeply, because love covers over a multitude of sins.” As mentioned, this passage has been abused and misused countless times, and it is especially relevant to me right now, as I just spent several hours with someone who claims to be a Christian who utterly massacred this passage.

Incredibly this gal spent hours seeking to defend fornication, claiming that the Bible nowhere condemned it, and God looks on the heart anyway, and He is not interested in a bunch of rules. I kid you not. But the icing on the cake (or the poison on the pill) was this incredible exchange:

Someone came to her post and said simply, “fornication is a sin”. And her immediate response? “Love covers over a multitude of sins.” Yes she actually used this passage in this ludicrous and unbiblical fashion. ‘There is nothing wrong with sleeping around, after all, love covers all sins!’

Satan would be proud of such textual suicide. Atheists are happy to abuse the Bible this way. But a Christian? Really? The entire lengthy exchange we engaged in was a real shocker. Every stupid and unbiblical thing one could think of she tossed my way.

Deception ran real deep in that poor gal, and we need to keep her in prayer. But if this passage is NOT about condoning sin, justifying sin, making excuses for sin, or letting sinners easily off the hook, then what exactly does it mean? Let me spend the rest of this article seeking to do just that: offer a much more obvious and biblical meaning.

It should be noted that this phrase comes (at least indirectly) from a Proverb which Peter would have been well aware of, Prov. 10:12: “Hatred stirs up conflict, but love covers over all wrongs.” It is also something James appealed to: “remember this: Whoever turns a sinner from the error of their way will save them from death and cover over a multitude of sins” (James 5:20).

And as always, context is king. The context for this verse (vv. 1-11), is about living for God, not just as an individual believer, but as a body of believers. It is about Christian community and how believers can live together as Christ would have them to.

So we certainly cannot get a pro-fornication reading out of this verse! But what it is saying is this: we should be willing to overlook various annoyances, offences and faults of others. Loving our brother means being willing to overlook or ignore a whole range of things that might otherwise bother us, offend us, or weary us.

Yes this may include certain lesser sins, but we are to be forgiving where possible. And this overlooking or covering over is not about winking at sin and pretending it does not matter, but seeking to be a peacemaker. This will not always be possible, and ‘open rebuke is better than secret love’ as Prov. 27:5 says.

Scot McKnight puts it this way: “We have all probably heard this statement bandied about to justify many kinds of behaviours, but what does this saying mean for Peter? . . . I contend that we are probably better off understanding the saying to be a social one by Peter. The community that loves one another is able to forgive one another more rapidly when minor issues arise.”

The words of Karen Jobes in her commentary on 1 Peter are worth quoting at length here:

Peter is not making a theological statement about sins being forgiven (“covered”) by God. Nor is he saying that sin in the church should be ignored or denied (“covered up”). Peter is concerned with behaviours that could destroy the Christian community; such behaviours must be extinguished if the church is to survive.
This understanding that love covers sins by not responding in kind to behaviour that destroys community is consistent with the exhortation of 1 Pet. 1:22: “From your heart love one another earnestly, for you have been born again.” The requirements of such love are further explained in 2:1 as “putting off all evil and all deceit and hypocrisies and jealousies, and all backbiting.” And in 3:9 Peter further commands that blessing is to be returned for insult. By Peter’s definition, “love” is not a warm, fuzzy feeling but means treating others in the Christian community in such a way as to promote unity and to avoid or overcome behaviours that destroy relationships. Clearly, living in community with other believers for a sustained period of time – especially in a hostile society – gives plenty of opportunity for such “sins” to occur that hurt members of the community, sow seeds of bad feelings, and fuel ongoing cycles of evil, deceit, hypocrisies, jealousies, and backbiting. This is why 4:8 calls not merely for love but for an earnest love that persistently continues to cover, to suppress, the potential for the destruction of the community. Such behaviour actually extinguishes sin and its effects within the community by not retaliating in kind, thereby realising in the context of community the claim of 4:1 that Christians must be through with sin.

So this phrase has absolutely nothing to do with making excuses for sin, or pretending that sin is no big deal because ‘love’ covers everything. Sin must always be taken with the utmost seriousness, and we dare not seek to justify sin or try to rationalise away sin.

Biblical love is always about willing the highest good for the other person, never about making cheap excuses for sinful behaviours, actions and lifestyles. If you love your brother, you will want them to be more and more like Christ, and less and less bound by sin.

Yes we are to be forgiving, patient and tolerant with one another, since we are all works in progress when it comes to sanctification. But to use this text as a justification for what the Bible clearly condemns as sin is a terrible case of Scripture twisting.

Cults do it all the time, but those claiming to be biblical Christians should never be guilty of such perversions of God’s word.