When we think of great men of God, terrific prophetic voices from the past century, names like Tozer and Ravenhill easily arise. But another preacher, evangelist and prophet can also be included in their ranks: Vance Havner. The American preacher has had a huge impact on so many others, and for good reason.

He was born in 1901 in North Carolina and brought up in a godly family. He was converted at the age of ten, and gave his first talk at a church when just 12. He once said, “I’ve never known a time that I didn’t feel called to preach.” He penned his first book, By the Still Waters, while a pastor in South Carolina. Some thirty more books were to follow, and that led to an extensive travelling and speaking career. 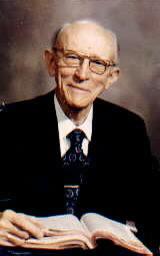 He had little formal theological training, and he did not graduate from either high school or college. He married Sara Allred in 1940, and they had a wonderful life (but no children) until she died 33 years later. He served as a pastor in two churches, but not for long.

Like Tozer, his heart was not in formal pastoral responsibilities. Says Dennis Hester:

Havner, however, did not have a pastor’s heart. He delegated much of his responsibilities for funerals and weddings to his associate pastor and detested business conferences and administration. His heart was in preaching, and in 1939 he went into fulltime evangelism. Havner preferred to be called a “revivalist” or “exhorter,” to being known as an “evangelist”.

Also like Tozer and other prophets, he was a bit of a loner, although he and his wife had a deep and wonderful relationship together. Says Hester,

He was somewhat of a loner, and his desire to live on a higher spiritual level, untangled from the trappings of success and materialism, may have caused him to appear peculiar and unsociable. But those who knew him best knew he had a tender heart and a gentle spirit. Waiting, reflecting, watching, and listening for that “still small voice” – that was Vance Havner.
Like the prophet Micaiah, Havner was lonely, speaking for God regardless of the consequences (1 Kings 22:7-8). He did not have a circle of friends that he depended upon to make things happen for him. No brochures, no radio or television advertisements, and no evangelistic organisation promoted his speaking ministry. Still, he never lacked for a place to preach.

He travelled extensively preaching and speaking, always with a prophetic edge. He died at the age of 85 on August 12, 1986. Billy Graham called him the most quoted preacher in America, and said this at his funeral: “Vance Havner used the Word of God like a sword. You pick any one of his books, and you could sense the presence and power of the Holy Spirit leaping off those pages.”

Warren Wiersbe said this of the man:

Very early in my ministry I learned to appreciate his books and began to collect them. You can read his messages over and over and get something new from them each time. I’m glad that some of his books are being reprinted and that some newly discovered material is being published for the first time. The new generation of preachers needs to get acquainted with this homiletical giant and learn from him. His messages are as relevant today as when he first preached them.

Michael Catt said this: “Vance Havner, in many ways, was the last prophet of the 20th century.” Yes it is as a prophet that he may be most known for. He spoke much about prophets, and he clearly knew whereof he spoke. Consider a few of his quotes on this:

“Prophets are almost extinct in the religious world today. The modern church is a ‘non-prophet’ organisation.”

“The most neglected ministry today is that of the New Testament prophet. Pastors, teachers, and evangelists may exercise a prophetic ministry occasionally, but there should be fulltime prophets who speak for God to the nation and the church.”

“The prophet must needs have the heart of a child and the hide of a rhinoceros. His problem is how to toughen his hide without hardening his heart. That combination can be achieved only by the grace of God.”

“There has never been a rush to wear the prophet’s mantle.”

“Prophets are very disturbing to smug church members who like to sit half-asleep in church on Sunday morning while the minister drones platitudes that offend nobody.”

“Prophets have never been plentiful, and the species is threatened with extinction.”

“We need a John the Baptist in America today to call the nation and church to repentance.”

“Popularity has slain more prophets of God than persecution ever did.”

And plenty of other quotes on other topics can be mentioned here, so let me conclude this article with some more of his spiritual gems:

“Salt seasons, purifies, preserves. But somebody ought to remind us that salt also irritates. Real living Christianity rubs this world the wrong way.”

“What our Lord said about cross-bearing and obedience is not in fine type. It is in bold print on the face of the contract.”

“Jesus Christ demands more complete allegiance than any dictator who ever lived. The difference is, He has a right to it.”

“We are suffering today from a species of Christianity as dry as dust, as cold as ice, as pale as a corpse, and as dead as King Tut. We are suffering not from a lack of correct heads but of consumed hearts.”

“A wife who is 85% faithful to her husband is not faithful at all. There is no such thing as part-time loyalty to Jesus Christ.”

“We have suffered from the preaching of cheap grace. Grace is free, but it is not cheap. People will take anything that is free, but they are not interested in discipleship. They will take Christ as Savior but not as Lord.”

“Sometimes your medicine bottle has on it, ‘Shake well before using.’ That is what God has to do with some of His people. He has to shake them well before they are ever usable.”

“I know that some are always studying the meaning of the fourth toe of the right foot of some beast in prophecy and have never used either foot to go and bring men to Christ. I do not know who the 666 is in Revelation but I know the world is sick, sick, sick and the best way to speed the Lord’s return is to win more souls for Him.”

“Unless there is a spiritual revival, we might as well try to hold back Niagara Falls with toothpicks.”

“Most church members live so far below the standard, you would have to backslide to be in fellowship with them.”