Anyone who knows even a little about biblical theology and basic hermeneutics knows that when it comes to word studies, etymology alone may not be very helpful. Simply looking at how a word breaks down in Hebrew or Greek is not all that we must know about a word and how it is used in Scripture.

We need more than just a simple breakdown of a word into its component parts in the original language to establish its full meaning and usage in Scripture. As Anthony Thiselton says about semantics and New Testament interpretation:

The English word “nice” is said to be derived from the Latin nescius, ignorant. Is “ignorant” the “basic” meaning of “nice”? When Englishmen say “Good-bye” do they “properly” mean “God be with you”? “Hussy” is etymologically a doublet of “housewife”, but can it be said on this basis that if I were to call someone a hussy I “properly” meant only “housewife”? As James Barr rightly asserts, “The main point is that the etymology of a word is not a statement about its meaning but about its history.” Hundreds of words diverge from or even (like “nice”) oppose their etymology. 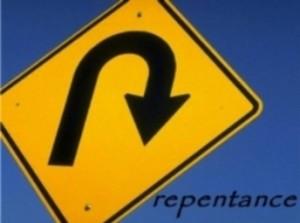 So care must be taken here. And I want to look at just one biblical word which is often treated in just this way, resulting in real damage to the fullness of the biblical data. It is often pointed out that the Greek word for repentance means a change of mind.

Often it is grace teachers and hyper-grace teachers who especially run with this line of thought. Often it is to rebut Catholic notions of penance and the like, where it is thought that contrition and emotional pain may be the bulk of what repentance means.

For example, Catholics may use Matthew 4:17 as translated by the Vulgate: “Do penance, for the kingdom of heaven is at hand”. Catholics will tend to emphasize contrition, penitence, remorse, feeling sorry, doing penance, etc., whereas Protestants tend to want to emphasize repentance as metanoia, a change of mind. There is a fair amount of truth in all of this.

(Of course it is not my intention here to get into a Catholic-Protestant debate on this particular issue. And the 1994 Catechism of the Catholic Church spends nearly 20 pages on this topic, so it is far more complex and nuanced than what I have just said above. But I only mention it here to give some background as to why certain Protestants may run with this minimalist definition of repentance.)

But there is much more to repentance than a mere change of mind. So let me look at this term and its biblical usage in more detail. First, it should be pointed out that other Greek words are used here about conversion, including epistrepho (turn, turn around, turn back). But let me focus on metanoeo.

The Greek word metanoia (noun), metanoeo (verb), is broken down into two parts: meta, change, alter, and nous, mind. Thus very simply put, repentance can mean having a change of mind. And that is certainly part of the biblical truth about repentance. But it is more than that as well.

Simply looking at how the term is used in the NT makes this clear. One of the key passages here is found in Matthew 3 when John the Baptist declares his mission and message: “Repent, for the kingdom of heaven has come near” (v. 2). He makes it clear what is required in vv. 7-8: “But when he saw many of the Pharisees and Sadducees coming to where he was baptizing, he said to them: ‘You brood of vipers! Who warned you to flee from the coming wrath? Produce fruit in keeping with repentance’.”

Bearing fruit here means that the changed mind includes a changed will, and genuine change has occurred, and is noticeable. As D. A. Carson comments:

Though the verb metanoeo is often explained etymologically as “to change one’s mind,” or popularly as “to be sorry for something,” neither rendering is adequate. . . . What is meant is not a merely intellectual change of mind or mere grief, still less doing penance, but a radical transformation of the entire person, a fundamental turnaround involving mind and action and including overtones of grief, which results in “fruit in keeping with repentance.”

In his article on “conversion, penitence, repentance, proselyte” in The New International Dictionary of New Testament of Theology, Jurgen Goetzmann says this about the metanoia word group: “The predominantly intellectual understanding of metanoeo as a change of mind plays very little part in the NT. Rather the decision by the whole man to turn around is stressed. It is clear that we are concerned neither with a purely outward turning, nor with a merely intellectual change of ideas.”

He goes on to remind us of this truth:

There are many passages in which the term metanoeo does not appear, but in which the thought of repentance is clearly present. This helps us to see to what extent Jesus’ message was determined by the call to repent in the light of God’s sovereign rule, which he himself had brought in. Examples are: “Unless you turn (straphete) and become like children, you will never enter the kingdom of heaven” (Matt. 18:3); “so therefore, whoever of you does not renounce all that he has cannot be my disciple” (Lk. 14:33). It is the spiritually poor, the little ones and the helpless, and those that need our help who receive the promise of the kingdom of God (Mt. 5:3; 18:10, 14).

In his very recent and very thorough full-length treatment of the subject of a biblical theology of repentance (‘Return to Me’, IVP, 2015), Mark Boda makes similar points. He lists the various Greek terms used, and says this:

It is difficult at times to identify the precise distinction between these various terms. The two key verbs metanoeo and epistrepho appear alongside each other in Acts 3:19, and the same two verbs appear with the common noun metanoia in Acts 26:20. While it is clear that metamelomai refers to an internal shift, there is a long tradition of defining metanoeo and metanoia in terms of a change of mind. However, although metanoeo can refer to a change in inner disposition (e.g., Acts 8:22: ‘repent of this wickedness of yours . . . the intention of your heart’), it is regularly connected to a change in external activity.

He then lists some of these:

2 Corinthians 12:21 I am afraid that when I come again my God will humble me before you, and I will be grieved over many who have sinned earlier and have not repented of the impurity, sexual sin and debauchery in which they have indulged.

Revelation 2:5 Repent and do the things you did at first.

Revelation 2:21-22 I have given her time to repent of her immorality, but she is unwilling. So I will cast her on a bed of suffering, and I will make those who commit adultery with her suffer intensely, unless they repent of her ways.

Revelation 9:20-21 The rest of mankind who were not killed by these plagues still did not repent of the work of their hands; they did not stop worshiping demons, and idols of gold, silver, bronze, stone and wood – idols that cannot see or hear or walk. Nor did they repent of their murders, their magic arts, their sexual immorality or their thefts.

Revelation 16:11 they refused to repent of what they had done.

He then looks at two passages (Zechariah 1:1-6 and Acts 26:16-20) and says this: “Repentance in these two passages is presented as a (re)turn to God and away from that which is contrary to God. Repentance also involves a shift in behaviour. Therefore, repentance in this study refers foremost to a turn or return to faithful relationship with God from a former state of estrangement: ‘Return to Me’ (Zech. 1:3).”

In a later chapter on repentance in the NT he says: “The key to understanding the theme of repentance in the New testament, as we saw with the Old Testament, is not in the meaning of particular words, but rather the broader meaning of the passages that communicate this theological concept through a variety of words, images and stories related to repentance.”

And as he says a bit later:

This understanding should shape the way we present the gospel. As Richard Owen Roberts writes, ‘To assume that sinners can turn to the Righteous One without turning from their own unrighteousness is the height of theological nonsense.’ Whether we use the word ‘repent’ or ‘believe’ or ‘follow’, or any other words, in inviting people to relationship with the triune God (and there is diversity in the early church proclamations), the key is to define these words in the holistic way we find in the biblical witness.

12 Replies to “Is Repentance Merely a Change of Mind?”