It is strange the way we deal with something like zeal – it is seen as being quite good in some areas but bad in others. If a person gets excited about religion, he is derided as a holy roller and a bit of a fruit loop. But if a person jumps up and down, screams himself hoarse, and basically makes an idiot of himself at a football match, he is seen as a devoted fan.

Fanaticism and zeal are acceptable in some areas, but frowned upon in others. I know plenty of believers who go crazy about their favourite sports team, but seem to be complete mutes when it comes to their faith. They will go on and on in fever-pitch excitement about a particular team, but seem absolutely bored when it comes to Christianity.

Or I will hear some believers get all agog about a certain political candidate, putting him up on a pedestal as if he were the long awaited messiah. They will defend such people to the death, but you rarely hear them doing anything close to this with the only one who does deserve such devotion: Jesus Christ.

We all know of believers who seem to get excited about all sorts of things, except their own Christianity. We could put all this down to plain old worldliness, carnality and so on. And some Christians worry about decorum and propriety and the like, thinking we should not get too excited, lest we drift off into emotionalism and fanaticism. 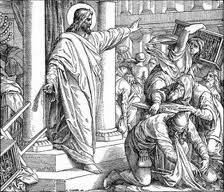 Yes there is always a danger of unguarded emotionalism. Zeal needs to be guided by wisdom and biblical truth. As Paul said of the Jews: “For I can testify about them that they are zealous for God, but their zeal is not based on knowledge” (Romans 10:2).

However, proper zeal is commended. As Paul says in Romans 12:11: “Never be lacking in zeal, but keep your spiritual fervor, serving the Lord.” Or again, in Galatians 4:18: “It is fine to be zealous, provided the purpose is good, and to be so always, not just when I am with you.”

And of course we have Jesus himself exemplifying all this. As we find in John 2:17: “His disciples remembered that it is written: ‘Zeal for your house will consume me’.” Discussing these words and the cleansing of the temple, Leonard Ravenhill said this:

Zeal! What a baptism of this same zeal the weak and wilting Church of this day needs. Zeal in this context is love ablaze. Zeal without reason becomes fanaticism. Jesus was not a fanatic. Yes, His love was blind to all the possible dangers of His mission. This love ignores personal safety, disregards the odds against it, drops “sacrifice” from its vocabulary, requires no crutches, ignores all danger, is intolerant of sin, but not fanatical. His was no sudden burst of anger; He had contemplated it all His life, but now the hour had come and men fled before His whip and holy anger.

Many of the great saints have spoken about the importance of zeal in the Christian life. One memorable bit of writing on this comes from J. C. Ryle. In his 1878 volume Practical Religion he had an entire chapter on the issue of zeal. The entire piece is well worth reading, but perhaps I can whet your appetite with some portions of it:

Zeal in religion is a burning desire to please God, to do His will, and to advance His glory in the world in every possible way. It is a desire which is not natural to man. It is a desire which the Spirit puts in the heart of every believer when he is converted, however, a desire which some believers feel so much more strongly than others that they alone deserve to be called ‘zealous’ men.
This desire is so strong, when it really reigns in a man, that it impels him to make any sacrifice, to go through any trouble, to deny himself to any amount, to suffer, to work, to labor, to toil, to spend himself and be spent, and even to die – if only he can please God and honor Christ.
A zealous man in religion is preeminently a man of one thing. It is not enough to say that he is earnest, strong, uncompromising, meticulous, wholehearted, fervent in spirit. He only sees one thing, he cares for one thing, he lives for one thing, he is swallowed up in one thing; and that one thing is to please God. Whether he lives, or whether he dies; whether he has health, or whether he has sickness; whether he is rich, or whether he is poor; whether he pleases man, or whether he gives offense; whether he is thought wise, or whether he is thought foolish; whether he gets blame, or whether he gets praise; whether he gets honor, or whether he gets shame; for all this the zealous man cares nothing at all. He burns for one thing, and that one thing is to please God and to advance God’s glory. If he is consumed in the very burning, he does not care – he is content. He feels that, like a lamp, he is made to burn; and if consumed in burning, he has but done the work for which God has appointed him.
Such a person will always find a sphere for his zeal. If he cannot preach, and work, and give money, he will cry, and sigh, and pray. Yes: if he is only a pauper, on a perpetual bed of sickness, he will make the activity of sin around him slow to a standstill, by continually interceding against it. If he cannot fight in the valley with Joshua, he will do the work of Moses, Aaron, and Hur, on the hill. (Exodus 17:9-13) If he is cut off from working himself, he will give the Lord no rest till help is raised up from another quarter, and the work is done. This is what I mean when I speak of zeal in religion.

He next discusses counterfeit zeal, which we all must guard against, and then continues: “Let every one who professes to be a Christian beware of suppressing zeal. Seek it. Cultivate it. Try to enlarge the fire in your own heart, and the hearts of others, but never, never stop it. Beware of throwing cold water on zealous souls, whenever you meet with them. Beware of nipping in the bud this precious gift when it first shoots up.”

Of course other great men and women of God have spoken about the need for Holy Ghost zeal. Let me close with a few of these folks:

“It is no marvel that the devil does not love field preaching! Neither do I; I love a commodious room, a soft cushion, a handsome pulpit. But where is my zeal if I do not trample all these underfoot in order to save one more soul?” John Wesley

“Revivals begin with God’s own people; the Holy Spirit touches their heart anew, and gives them new fervor and compassion, and zeal, new light and life, and when He has thus come to you, He next goes forth to the valley of dry bones… Oh, what responsibility this lays on the Church of God! If you grieve Him away from yourselves, or hinder His visit, then the poor perishing world suffers sorely!” Andrew Bonar

“Here is the reason why we have such a host of stillborn, sinewless, ricketty, powerless spiritual children. They are born of half-dead parents, a sort of sentimental religion which does not take hold of the soul, which has no depth of earth, no grasp, no power in it, and the result is a sickly crop of sentimental converts. Oh! the Lord give us a real, robust, living, hardy, Christianity, full of zeal and faith, which shall bring into the kingdom of God lively, well-developed children, full of life and energy, instead of these poor sentimental ghosts that are hopping around us.” Catherine Booth

“That many Christians in our day are lukewarm and somnolent will not be denied by anyone with an anointed eye, but the cure is not to stir them up to a frenzy of activity. That would be but to take them out of one error and into another. What we need is a zealous hunger for God, an avid thirst after righteousness, a pain-filled longing to be Christlike and holy. We need a zeal that is loving, self-effacing and lowly. No other kind will do.” A. W. Tozer

“Take care of giving up your first zeal; beware of cooling in the least degree. Ye were hot and earnest once; be hot and earnest still, and let the fire which once burnt within you still animate you. Be ye still men of might and vigour, men who serve their God with diligence and zeal.” Charles Spurgeon

3 Replies to “On Being Zealous”