So while Europe burns, President Obama is in Cuba, singing the praises of our communist enemies. While blood was being washed off the streets of Brussels, he was enjoying a baseball game with Raul Castro. Yes, the leader of the free world in bed with one of the most horrific dictatorships on earth.

US Presidential candidate Ted Cruz was quite right to say, “While our friends and allies are attacked by Islamic terrorism, President Obama is spending his time going to baseball games with Castro.” Anyone who knows anything about communist Cuba would hang their heads in shame as they witness the treasonous Obama in action.

One of the most powerful and damning indictments about this communist hellhole was written back in 1986: Armando Valladares’ Against All Hope. Some years ago I discussed this key volume:

He had been a political prisoner for twenty years in Castro’s Cuba. No civilised person could read that book without feeling sick in the stomach over the torture, horror, terror and misery that he and so many other Cubans endured under Castro.
No one reading that book could any longer be under any illusion about what sort of place Marxist Cuba was. It was a hell-hole pure and simple. Yet way too many Western lefties did their best to praise Castro and Cuban Marxism, and even seek to discredit the testimony of Valladares and many others.
Ideology was simply put ahead of humanity. Or as French philosopher Bernard-Henri Levy put it in his 1977 volume, this was a case of Barbarism with a Human Face. The Western leftists who sought to defend such corrupt regimes – “useful idiots” as Lenin called them – were willing to whitewash the terror of the Castro dictatorship in order to justify their attempt to create heaven on earth. 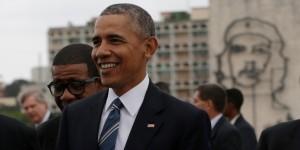 Yet here is Obama sucking up to this nation, seeking to fully normalise relations with it and pretend everything is just peachy. And as to Che Guevara, what can one say? He has been turned into a hero by Western idiots who know nothing about him, Cuba, or communism.

Several years ago Michael Totten wrote a lengthy piece about Che. He said this about the monster in his opening paragraphs:

Che Guevara has the most effective public relations department on earth. The Argentine guerrilla and modern Cuba’s co-founding father has been fashioned into a hipster icon, a counter-cultural hero, an anti-establishment rebel, and a champion of the poor. As James Callaghan once put it, “A lie can be halfway round the world before the truth has got its boots on.”
The truth about Che now has its boots on. He helped free Cubans from the repressive Batista regime, only to enslave them in a totalitarian police state worst than the last. He was Fidel Castro’s chief executioner, a mass-murderer who in theory could have commanded any number of Latin American death squads, from Peru’s Shining Path on the political left to Guatemala’s White Hand on the right.
“Just as Jacobin Paris had Louis Antoine de Saint-Just,” wrote French historian Pascal Fontaine, “revolutionary Havana had Che Guevara, a Latin American version of Nechaev, the nineteenth century nihilist terrorist who inspired Dostoevsky’s The Devils. As Guevara wrote to a friend in 1957, ‘My ideological training means that I am one of those people who believe that the solution to the world’s problems is to be found behind the Iron Curtain.’…He was a great admirer of the Cultural Revolution [in China]. According to Regis Debray, ‘It was he and not Fidel who in 1960 invented Cuba’s first corrective work camp,’ or what the Americans would call a slave labor camp and the Russians called the gulag.”
He was killed in Bolivia by the army in 1967 when he tried to overthrow yet another government and replace it with a communist state.
I saw only a handful of posters of Fidel Castro in Cuba and none whatsoever of his younger brother, Raul, who is now Cuba’s president, but I saw hundreds of portraits of Che, as if he, rather than one of the Castros, were the acting dictator today. The cult of personality revolves entirely around the dead guy. It’s convenient and clever. He can’t do anything new to discredit himself and it gives the Castro family a false air of modesty.

And Jennifer Kabbany has offered us this handy pop quiz:

Who said the following – Che Guevara or Adolf Hitler?
“Youth must refrain from ungrateful questioning of governmental mandates. Instead, they must dedicate themselves to study, work and military service.”
“The victory of Socialism is well worth millions of atomic victims!”
“Hatred is the central element of our struggle! Hatred so violent that it propels a human being beyond his natural limitations, making him a violent and cold- blooded killing machine.”
“We must do away with all newspapers. A revolution cannot be accomplished with freedom of the press.”
“Youth should learn to think and act as a mass. It is criminal to think as individuals!”
“I’d like to confess, Papa, at that moment I discovered that I really like killing.”
If you answered Che, Che, Che, Che, Che and Che – give yourself an A.

Will Spencer says this about the leftist icon:

Ernesto “Che” Guevara has become a fantastic symbol for the American left, adorning t-shirts, hats, coffee mugs, and dorm room walls across the nation.
This is astounding when you stop to consider the actual person who “Che” was. Che was a racist who ranted against Africans. He hated homosexuals and had them imprisoned. He disdained both rock music and jazz and persecuted musicians. He burned thousands of books and murdered Cuban authors. His special pleasure in life was murdering young boys in front of their mothers. This is Che, the leftist hero.
Fidel Castro put Che in charge of the La Cabaña prison. He loved executions so much that he had a window in his office overlooking the yard where the firing squads did their grisly work. His henchmen would bind men and boys for Che to shoot personally in the evenings to satisfy his sadistic urges. Che wrote to his father “I’d like to confess, papa’, at that moment I put a bullet in a mans head and watched him die slowly, I discovered that I really like killing.” He bragged of ordering the executions of 2,500 political opponents by 1959.

Back in 2007 Humberto Fontov, who left Cuba in 1961 at age seven, wrote the important volume, Exposing the Real Che Guevara: And the Useful Idiots Who Idolize Him.

In a brand new article Fontova writes about Obama’s visit to Cuba:

While in Havana yesterday president Obama carefully arranged a photo-op with the huge mural of Che Guevara as backdrop. If the phrase “carefully arranged” strikes you as rhetorically “pushing the envelope,” I invite you to watch this brief video for proof.
“Better” still, this mural – the biggest of the celebrated (by many liberals) mass-murderer, racist and warmonger– adorns the headquarters for Cuba’s Ministry of the Interior, which is to say: the headquarters for Cuba’s KGB and STASI trained secret police. Nothing could be more fitting.
In 1959, with the help of Soviet GRU agents, the man President Obama felt a burning need to arrange as his backdrop helped found, train and indoctrinate Cuba’s secret police. “Always interrogate your prisoners at night,” Che Guevara instructed the Castro regime’s torturers. “A man’s resistance is always lower at night.” Che Guevara, that whacky cut-up, often signed his early correspondence as “Stalin II.”
You see, amigos: Che Guevara and Raul Castro founded a regime that jailed more of its subjects than did Stalin’s and murdered more of its subjects in its first three years in power than did Hitler’s in its first six.

So here we have Obama not only proudly posing in front of one of his torture chambers, but happily sucking up to Cuba and its horrific past. This my friends is the President of the United States of America. Never have we had such an evil, anti-American Commander–in-Chief. He should be tried for treason. Yet useful idiots will hold up Obama T-shirts just as they hold up Che T-shirts.

4 Replies to “Obama, Cuba and Che”