Another day, more shouts in Arabic, more gun fire, more explosions, and more carnage, bloodshed and death. It is groundhog day, and no one seems to be learning any lessons here. This time a pair of bombings at the Zavantem Airport and one at the Maalbeek metro station in Brussels. So far around 34 have been killed with nearly 200 injured. 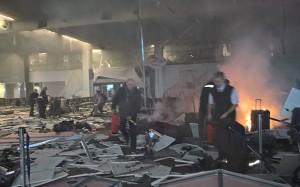 Brussels is now in lockdown, and Europe is once again holding its breath, waiting for the next episode. Sadly Belgium has been a bit of a hub in Europe for IS operatives and others, and when Salah Abdeslam, wanted in connection with the Paris terror attacks, was arrested on Friday in Brussels, things really heated up.

The nation’s security forces will be under heavy scrutiny now, with questions asked as to why all this was allowed to seemingly occur so easily. Most folks knew that Friday’s arrest would ratchet things up immensely, yet airport and transport security seems to have remained fairly low key.

But another major issue also deserving attention – and a major rethink – is the immigration policy of the EU and so many European nations. Easily allowing in so many folks who have trouble – or no intention of – adopting European values and principles is bad enough, but letting plenty of terrorists in as a result has been a recipe for disaster.

Multiculturalism has been a mega-failure in Europe, along with the failed open border policies, and these sorts of attacks are to be fully expected. But living in denial is mainly how the West is dealing with all this. Indeed, watching several hours of television news coverage on this latest attack, struggling to ever hear the “I” or “M” words, basically proves my point.

No one wants to state the obvious. The few voices which are based on realism and not fantasy, such as that of Dutch politician Geert Wilders, will hopefully get more of a hearing now. Indeed, he and his party look to be going from strength to strength after each of these attacks.

The fact that so few have caught on here is utterly appalling. It is not as if this was the first such attack. There have been plenty of them. Simply consider just some of the major attacks since 9/11 in various Western locations, or places with Western visitors:

Since September 11, 2001 there have been over 28,000 Islamic terror attacks. Did you get that? Over 28,000. Yet our ruling elites and media elites still cannot bring themselves to talk seriously and sensibly about Islam. It is a conversation we really need to have.

How many more attacks are needed? How much more blood on our streets is required? How many more cities have to go into lockdown before we wake up? As Robert Spencer just wrote about this attack: “Europe is at war. Will European authorities continue to aid and abet the enemy, and invite Muslim migrants into their countries in large numbers, despite the presence of jihad terrorists among them?”

Indeed, while US President Obama was in Cuba, singing the praises of the communist dictators there, candidate Ted Cruz cut to the quick on Facebook about the reality we face:

Our hearts break for the men and women of Brussels this morning. Make no mistake – these terror attacks are no isolated incidents. They are just the latest in a string of coordinated attacks by radical Islamic terrorists perpetrated by those who are waging war against all who do not accept their extreme strain of Islam.
Radical Islam is at war with us. For over seven years we have had a president who refuses to acknowledge this reality. And the truth is, we can never hope to defeat this evil so long as we refuse to even name it. That ends on January 20, 2017, when I am sworn in as president. We will name our enemy – radical Islamic terrorism. And we will defeat it.

As always, we need to pray for the city, the nation, and all the family members and loved ones so adversely impacted by all this. And we need to pray that our leaders snap out of their slumber, and start ruling as if Europe still mattered – and before it is too late.