‘Bodies flying through the air.’ ‘Blood on the streets.’ ‘Human flesh on the walls.’ Another day, another series of terrorist attacks. But not just any old terrorist attacks – these are specifically, and relentlessly, Islamic terrorist attacks. These attacks are overwhelmingly Islamic in nature because this is what Islam does, always has done, and always will do.

And this of course is all in full accordance with the teachings of the Koran. Consider just a few verses:

“Slay the unbelievers wherever you find them.” 2:191

“We will cast terror into the hearts of the unbelievers, for that they have associated with Allah that for which He sent down never authority; their lodging shall be the Fire; evil is the lodging of the evildoers.” 3:151

“Maim and crucify the infidels if they criticize Islam” 5:33

“I will instil terror into the hearts of the unbelievers: smite ye above their necks and smite all their finger-tips off.” 8:12

“Then, when the sacred months are drawn away, slay the idolaters wherever you find them, and take them, and confine them, and lie in wait for them at every place of ambush.” 9:5

“Fight those who do not believe in Allah or in the Last Day and who do not consider unlawful what Allah and His Messenger have made unlawful.” 9:29 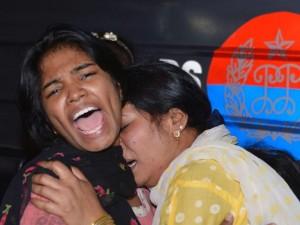 And on Easter weekend we once again found Muslims doing what Muslims do best: following the example and teachings of Muhammad as they terrorise, kill and shed innocent blood. They are devout Muslims, taking their faith and their holy writings with the utmost seriousness.

Consider four examples of Islam at work on Christianity’s holiest weekend. The first of course is the horrific Easter terror attack in Pakistan. The details are as follows:

At least 70 people – mostly women and children – have been killed at a crowded park in Pakistan in a suicide blast that also wounded more than 300 people, officials said. A faction of the Pakistani Taliban, Jamaat-ul-Ahrar, later claimed responsibility for the attack in the eastern city of Lahore and said that it was aimed at Christians. Al Jazeera’s Kamal Hyder, reporting from the capital, Islamabad, said Christians were celebrating Easter Sunday at Gulshan-e-Iqbal Park, which is popular with families, when the bomber blew himself up a few metres from a children’s play area.

Another news report said this:

Witnesses said they could hear children screaming as people carried the injured in their arms, while frantic relatives searched for loved ones in nightmarish scenes at the park. Doctors described frenzied scenes at hospitals, with staff treating casualties on floors and in corridors, as officials tweeted calls for blood donations. “It was a suicide attack. The bomber managed to enter the park and blew himself up near the kids’ playing area where kids were on the swings,” Lahore’s top administration official Muhammad Usman told AFP.
“After ten minutes I went outside. There was human flesh on the walls of our house. People were crying, I could hear ambulances. It was overcrowded because of Easter, there were a lot of Christians there. It was so crowded I told my family not to go.” Yousaf Masih, a father who was searching for his family, told AFP: “My kids came here (to the park). I was at home, I saw the news on TV, but my wife and children were here.”
Eyewitnesses said they saw body parts strewn across the parking lot once the dust had settled after the blast. “When the blast occurred, the flames were so high they reached above the trees and I saw bodies flying in the air,” said Hasan Imran, 30, a resident who had come to Gulshan-e-Iqbal Park for a walk.

One first-hand account of all this is found here:

The bombing was at a public park, where many Christians spent the afternoon enjoying Easter. The park was a family park, that had many things for children, like toys and swings, etc. Word got around that this was definitely an attack on Christians, and it was mostly Christians who died, and among these were women and children. Among these women and children, I heard that a pregnant woman died, along with other infants, as young as 6 months old. In addition, our Elder’s nephew died, and another one of our Church families barely escaped. Sam’s niece also has a friend who lives close by there. She reported to her that she came home and saw blood everywhere, and people were crying. I’ve also been hearing more details about what happened at the incident . . . I heard that the security people at the park saw the bomber coming, and told the bomber “Please don’t. Please don’t.” But when the crowd rushed in, the bomber detonated his bomb, killing 65 people and injuring at least 300. This has been very tragic, and we are still finding out more news, as time goes on. Thank you all for your continued prayers.

This is not something remote for me. I personally know a number of Pakistani Christians. This attack was deliberately targeting Christians, and deliberately occurred on Easter. Recall that the Brussels’ attacks were also meant to be carried out on Easter, but were brought forward after some of the terrorists were arrested beforehand.

Consider also what Islam does to those who dare to even say something nice about Christians, as this poor Pakistani man living in Glasgow sadly discovered:

A newsagent was murdered by a fellow Muslim after he wished his Christian friends a peaceful Easter. Asad Shah, who was stabbed up to 30 times at his shop, had praised both the life of Jesus and ‘his beloved Christian nation’. Left lying in a pool of blood, the 40-year-old died in hospital. Police, who were questioning a 32-year-old suspect last night, said the killing was religiously motivated.
Mohammad Faisal, a family friend, said a bearded Muslim wearing a long religious robe entered Mr Shah’s shop and spoke to him in his native language before stabbing him in the head with a kitchen knife. Mr Shah’s brother, who was working next door, rushed out to find the killer laughing while sitting on the Glasgow newsagent’s bleeding chest.
‘The brother dragged Mr Shah away but the guy continued attacking with the blade,’ said Mr Faisal. ‘They struggled up to the bus stop where Asad collapsed. ‘It was just a clear-cut revenge attack. For posting messages about peace, messages about greeting fellow Christians and Jews.

My third example begins with this heading: “U.S. at Easter: When Christians Are Slaughtered, Look the Other Way: Muslims Slaughter Over 10,000 Christians and Destroy 13,000 Churches in Nigeria.” As Raymond Ibrahim writes:

Boko Haram, the Nigerian Islamic extremist group, has killed more people in the name of jihad than the Islamic State (ISIS), according to the findings of a new report. Since 2000, when twelve Northern Nigerian states began implementing or more fully enforcing Islamic sharia law, “between 9,000 to 11,500 Christians” have been killed. This is “a conservative estimate.”
In addition, “1.3 million Christians have become internally displaced or forced to relocate elsewhere,” and “13,000 churches have been closed or destroyed altogether.” Countless “thousands of Christian businesses, houses and other property have been destroyed.”

My last example has to do with yet another Christian martyr. As one report states:

The Indian Catholic priest kidnapped by ISIS-linked terrorists in Yemen earlier this month was crucified on Good Friday, it has been claimed. Father Thomas Uzhunnalil, 56, was taken by Islamist gunmen, reportedly linked to ISIS, who attacked an old people’s home in Aden, southern Yemen, killing at least 15 people, on March 4. The terrorists reportedly carried out the heinous murder on Good Friday, after threatening to do so earlier in the week, according to the Archbishop of Vienna.

Now, are there moderate Muslims who do not kill and terrorise Christians? Sure, but two reminders: The real issue here is Islam itself. Islam is a murderous political ideology which offers no mercy to the unrepentant infidel, and demands complete submission to Allah.

And as Asad Shah discovered, to dare to speak out will likely cost you your very life. Which is why we so rarely hear from these “moderate Muslims”. They either do not really detest their murderous kin folk, or they are too terrorised to say anything.

In either case, this is Islam. As always, we must pray for and seek to reach individual Muslims with the good news of Jesus Christ. But at the same time we must redouble our efforts to resist political Islam. It is our moral duty to seek to do both.

13 Replies to “This is Islam – This is What Islam Does”